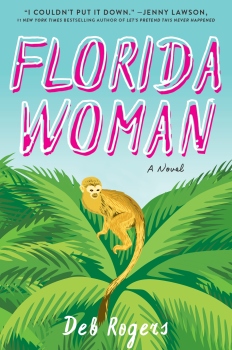 A gleefully dark debut. Jamie escapes viral infamy and jail by taking a community service placement at a shelter for rescued monkeys. She’s hoping for a fresh start, but something sinister stirs in the palmetto woods and secrets lurk among the three beguiling women who run the shelter. As Jamie tries to survive the offbeat world and rituals of Atlas, her summer threatens to inspire an even stranger Florida headline than she ever could’ve imagined.

The plot came first. I knew I wanted to tell this particular story and explore what would happen when someone without support has her fate in the hands of people she doesn’t know whether to trust or fear. That said, this is a very Florida story, so the setting is deeply interwoven with the plot and with the characters as well. Jamie, Tierra, Dagmar, Sari—they’re all Florida Women, in every way.

The central story in FLORIDA WOMAN unfolds over the course of one summer at a remote refuge for monkeys. The staff who live at Atlas are isolated and insular, laden with close, cloying, and even claustrophobic relationships and habits—while the outdoor setting, in the middle of a palmetto forest, is wide open and ominously expansive. I love the push-pull of these dueling qualities, but it definitely was a challenge to get the balance right. The biggest opportunity was showing my main character, Jamie, as she tried to interpret the various dangers around her. When you’re used to being an outsider, the norms of a group can be a mystery to decipher. You can have a lot of mixed feelings when you’re under that kind of pressure, including wanting to fit in versus wondering if you should run far away!

I was shocked when I researched the extent of the exotic animal trade in Florida. I knew the basics, but that was only the tip of the iceberg!

Deb Rogers lives and works in St. Augustine, a deeply haunted and wildly beautiful old city on the Atlantic coast of Florida. You can talk with her on Twitter at @debontherocks and via her website.