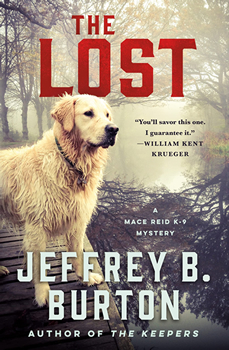 When Jeffrey B. Burton set out to write THE LOST, the third book in his K-9 mystery series, he wasn’t quite sure where he was headed.

“It was the first time I experimented writing from the seat of my pants, rather than working strictly from an outline,” he says.

Thankfully, Burton was never actually lost, as might be inferred from the title. Indeed, Burton’s experiment, a twisting thriller of greed, revenge, regret, and cold-blooded evil, is a brilliantly plotted success. Told via a four-part narrative of escalating action and danger, THE LOST is filled with great characters—dry-witted heroes, braves canines, dedicated cops, bumbling and devious villains alike—along with a stunning climax.

The story centers on dog trainer Mason “Mace” Reid and his cadaver dog, Vira (short for “Elvira”), called to the Chicago lakeside estate of billionaire financier Kenneth Druckman after a late-night home invasion ends with millions in stolen jewelry and the abduction of the man’s wife, Calley, a retired supermodel, and their five-year-old daughter, Elle. A desperate search for clues to the perpetrators’ escape leads Mace and Vira through the property’s dense woodlands to Calley’s battered and bloody body.

But for Vira, the trail doesn’t end there. Her keen sense of smell draws her back to the mansion, pointing the proverbial finger—or in this case, nose—at Druckman as a suspect in the jewelry heist, the brutal murder of his wife, and the kidnapping of their daughter.

Of course, Vira’s golden retriever truth detector is right on the nose. Druckman is involved, as Burton quickly reveals with an about-face, taking the reader back to the inciting incident for the man’s desperate act—a private meeting during which his biggest investor exposes the financial wunderkind as a fraud, a financial PONZI artist, Chicago’s clone of Bernie Madoff. 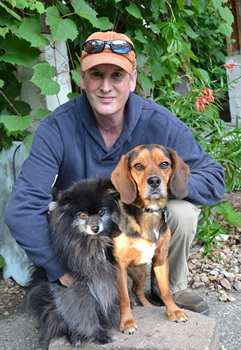 Forced into an unwieldy deal to make reparations to his client, the frantic financier sets off on a desperate, ill-conceived plan to save himself from losing all his money, his family, and his freedom. Pulled into his destructive orbit are two unsavory, but not altogether unredeemable accomplices, who concoct their own twisted plots to save themselves after the chaotic kidnapping scheme falls apart before Elle is ransomed and returned to her father. The greatest danger arises from two merciless malefactors, lying in wait, eager to sweep in and snatch what’s left of the failed kidnapping to satisfy their own perverse ends.

While all this is going on and the FBI struggles for leads, Vira, Mace, and his girlfriend, Kippy, a Chicago PD detective, are hot on the elusive trail of Elle and her abductors, racing against time, using all their wits, sniffs, grit, and growls to rescue the little girl before any harm can come to her, or worse, she disappears forever.

Like the dogs featured in Burton’s previous K-9 books, Vira is a true hero in THE LOST, performing feats no human can—sniffing out the guilty and innocent alike, protecting the humans in her pack from harm, and coming to their rescue when all seems lost. But that is expected of Burton and his K-9 stars, and delightfully so. He is, like many of us, a sucker for dogs. “I’m in awe of their ability to sniff out virtually anything required of them, from human remains, survivors of catastrophes, as well as drugs, bombs, even COVID and certain cancers. It’s almost supernatural what they can do.”

Burton is quick to point out that his own dogs are far from the inspiration for Vira, Sue, and the other working dogs featured in his books. “I will admit that Milo (Burton’s “big galoot” of a Beagle) has an amazing ability to escape our yard to find the most awful, disgusting animal carcass to roll around in, but I take no credit for that,” he says. “These amazing HRD dogs, however, are the result of hundreds of hours of training by skilled people with incredible patience, something I lack with my dogs. I guess that’s why Milo and Lucy (Burton’s perpetually annoyed Pomeranian) pretty much ignore me when I try to issue commands.”

Instead, the idea for Burton’s series came about by happenstance. “I was in the car, driving to the courthouse for jury duty, when a news report came over the radio about a missing elderly man who had wandered off into a wooded area. The local sheriff’s office presumed the man dead from exposure and had brought in HRD (Human Remains Detection) dogs to lead searchers to his body. That news bulletin set me wondering about these amazing dogs and what they can do. With a good deal of idle time during the trial, I found myself jotting down character profiles, dogs and their names, and ideas for how these players, both human and canine, could be sucked into a mystery beyond finding a body.”

News of another sort led to Burton writing THE LOST. “I was at work when a co-worker asked me if I’d heard the news about former colleague’s husband and his arrest for financial crimes,” he says. “I was stunned. I read everything I could find on the internet about the guy, what he’d done, the evidence the FBI and IRS had on him. He was Minneapolis’s version of Bernie Madoff. My research on the two swindlers led me to creating Kenneth Druckman. The story and the characters involved flowed from him and his desperation to avoid exposure.”

The bottom line here? You don’t have to be a dog lover to thoroughly enjoy THE LOST. The creative inspiration and energy that Burton put into this thriller makes for a great read for cat people, snake charmers, and ant farmers, even those who eschew the idea of an animal companion in their lives.

After you pour through your copy of THE LOST and find this to be true, check out Burton’s two other books in the series—The Finders (2020) and The Keepers (2021).

Jeff is a member of the Mystery Writers of America, International Thriller Writers, and the Horror Writers Association. He lives in St. Paul with his wife, an irate Pomeranian named Lucy, and a goofball/sweetheart of a Beagle named Milo.