Features, Latest Books, Up Close
4 weeks ago
by Dawn Ius
0

Laughter as a Coping Mechanism 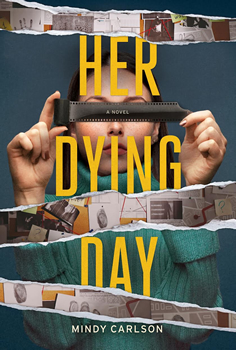 Mindy Carlson prefers chocolate as a coping mechanism, but if it’s not around, a healthy dose of laughter will do the trick. It’s one of the reasons she infuses humor into her writing.

That’s certainly the case for her “sparkling” debut, HER DYING DAY, the story of an intrepid aspiring filmmaker who chooses to solve the mystery of missing super-author Greer Larkin for her final assignment documentary.

The novel kicks off with a bold, but funny, first sentence, setting the tone for a page turner that introduces you to a fully-developed cast of characters—and suspects. It’s not only June Masterson’s need for an A-plus final assignment that has her searching for clues, but a kind of debt she feels to the author, whose books helped her cope with life on a commune.

June couldn’t be further from the rules and restrictions that underpinned her youth, but as she navigates the demands of her investigation, not to mention a forbidden relationship with her advisor, June realizes it’s not as easy to escape the impacts of her past.

In this exclusive interview with The Big Thrill, Carlson shares a little insight into her publishing journey, reveals her most exciting career moment yet, and talks about crafting a perfect opening line.

Congratulations on your upcoming debut, HER DYING DAY. It’s a fantastic debut. I’d love to hear a bit about your publishing journey—starting with the query trenches, and how you landed your dream agent.

Thank you! I’m glad you enjoyed HER DYING DAY. I finished writing it just as the world shut down for the pandemic, so I turned my obsessive focus toward querying and getting an agent. I queried about 80 agents total over a seven-month period of time and got rewrite and resubmit requests from two of them. I hired a book coach to help me gain some space and perspective about the manuscript I’d been living with for the last year, which helped immensely. I ended up going with Abby Saul from The Lark Group, who gave me two R&R requests. I liked her editorial style and how she pushed me in my crafting of the story.

HER DYING DAY kicks off with a healthy dose of humor, including one of the most memorable lines in a book I’ve read in a long time. Though this is a mystery, why was it important for you to include humor in this novel, and perhaps in your writing as a whole? What do you think the role of humor is in mystery writing?

Laughter is my second favorite coping mechanism. (Chocolate is my top choice.) As a writer, comedy allows you the ability to address deeper, darker themes in a way that still keeps the novel in a more “cozy mystery” space. So many people use humor to reframe tragedies and trauma by looking at the ridiculous pieces of those incidences. Being able to laugh at trauma is one way of taking back power from a time when you’ve felt powerless. Infusing my novel with comedy also ensures that I’m writing from a place of authenticity. Comedy only works if the emotions coming from my character are conveyed in an authentic way. Otherwise it comes across as mean or insipid, which tells me I need to dig deeper into my character’s emotions and motivations. Plus my characters get to say things to each other that I would never say in real life!

In HER DYING DAY, we follow aspiring filmmaker June Masterson as she works on her final project—a documentary about the disappearance of famed mystery author Greer Larkin. I’d love to know more about what inspired the plot.

In 2016, I was reading an article about the 90th anniversary of the disappearance of Agatha Christie. In December 1926, she vanished for ten days after she and her husband fought over his demand for a divorce. He’d gone for a weekend with his mistress and their mutual friends, and Agatha walked out of the house for a drive and never returned. She was found, after exhaustive and unprecedented search efforts, in a spa with amnesia. But I thought, What if she hadn’t been found? And what if this had happened only 20 years ago? Who would be the suspects? How would her fandom react? Would there be fansites? Documentaries? Dateline specials? Podcasts? Conspiracy theories? And the idea bloomed from there.

June is feisty! It’s not a spoiler to say she’s having an affair with a married man—it’s revealed in your opening line—but that relationship is perhaps a byproduct of her unorthodox upbringing. Please tell us more about June—where she begins at the start of the story and where you wanted her to end up, and how she formed for you as a character.

June is a loud, sarcastic, fun 24-year-old living a full 1990s flannel, Nirvana T-shirt, Converse All-Star lifestyle in a tiny New York City apartment. She’s escaped from her family’s extremely reclusive goat commune and is now going out of her way to make rebellious decisions while wrestling between doing what’s right and what feels good. She would deny it, and how you meet June certainly backs up this claim, but deep inside, she wants to be a good person. The reader gets to see her stumble along a path to maturity while she’s making a documentary about missing super-author Greer Larkin.

When I write, I hear the characters talking in my head. June spoke out the first line of the book loud and clear, and I flew through that opening scene, which has changed very little since the first draft. Then I pulled out a character sheet and started to figure out what kind of person sleeps with their married advisor and whose dream is to become the next big Netflix true crime documentary filmmaker. I love June, and I love her journey through this novel.

June grew up on a commune that had some pretty restrictive rules. Give us an example of one of your favorite rules, and how June goes against that now that she’s no longer part of the commune.

One of the biggest rules that chapped June’s hide was one hour of television a week. In her new life she has the TV on all the time. She also was allowed one pair of shoes at a time, so now she has an entire closet full of Converse All-Stars in every color of the rainbow. The third was the early to bed, early to rise philosophy, which she has rejected utterly. She goes to bed when she wants and gets up as late as she can get away with. With some of these rules, she’s made a conscious choice to live differently, and in others it’s unconscious and unintentional.

From a structural point of view, you made an ambitious decision to include excerpts from Greer Larkin’s books, which serve as clues to the mystery of what happened to her. What were some of the challenges of that structure, and how did you overcome them?

One challenge was the voice. I wanted it to be believable that someone else had written these vignettes. I didn’t want it to feel like the rest of the novel at all. Greer’s books are not humorous. They are straight-up thrillers, and almost all the excerpts are at dramatic, climatic moments. I also wanted the characters to feel three-dimensional and fully realized as if they’d come straight from a real, full-length book. Those excerpts also had to function as Greer’s voice in the book, which actually helped me to overcome the challenge of structure and voice. I did several exercises writing journal entries as Greer in order to fully bring her to life. Almost like doing an improv skit. It was mentally exhausting, but the result was worth it.

As June continues to research what happened to Greer, a number of suspects emerge—Greer’s mother, her best friend Rachel, her fiancé Jonathan. Which of these characters was easiest for you to develop and why? Most difficult?

Greer’s mother, Blanche, was the easiest. Her snark and quick wit tied up with snobbery was so much fun to write. I could develop dialogue for her all day long. Rachel was actually fairly difficult. She has to walk a tightrope about what she can reveal and what she needs to keep hidden. I found myself pondering her dialogue and searching for the right words that would let the reader get to know Rachel while still allowing Rachel to hold her secrets until they needed to burst forth.

A typical mystery feels like it might be difficult to “wing.” Tell me a little about your writing process—plotter or pantser? What’s your secret to weaving in all of the great twists?

I am a card-carrying plotter. I start with a detailed outline guiding me through what happens and the how my characters feel about what happened. When I get to a part and think “that’s boring” or if the scene is feeling formulaic, that tells me I need a twist. I write a list of ten of the most improbable things that could happen in this scene. The first three ideas are usually pretty tame, but as you run out of obvious options, that’s when you get into the fun twists.

What has been your most memorable moment in your publishing journey so far?

The day I got my book cover mock-up. The spinning of my brain through deadlines and tasks and ideas came to a halt, and my focus narrowed down so that the cover was absolutely consuming my attention. It was one of those “the world went into slow-mo” moments and crystalized in my brain. That was the moment all this became 100 percent real.

What books are currently on your TBR?

What Can’t Be Seen by Brianna Labuskes

The Monsters We Make by Kali White

Payback’s a Witch by Lana Harper

The Maidens by Alex Michaelides

A Long Petal of the Sea by Isabel Allende

I have a couple of books that are cooking right now. One is a Friends meets And Then There Were None novel, and the other is about three adult sisters who are investigating the death of their father that happened when they were children.