Sisterhood: The Pulse that Drives Thriller 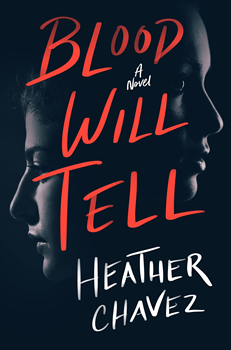 It’s a thriller, so obviously it’s got suspense, blood, and people generally behaving badly. But at its core, BLOOD WILL TELL is the story of two sisters—schoolteacher and single mom Frankie Barrera and her younger, far less responsible and much less reliable sister, Izzy.

Their relationship has always been somewhat dysfunctional, but it’s first tested to its brink when five years ago a game among teenagers went horribly wrong, and Izzy’s part in the subsequent tragic fall-out has never been fully understood—Izzy remembers very little from the night a party got out of hand, and one girl was never seen again.

Now another girl has gone missing—and Frankie’s truck has been described as the one used in the abduction of a teen from a neighboring town. Frankie wasn’t in that town…and there’s only one other person who had access to her vehicle.

Frankie once again finds herself in a position to protect her sister, despite being unsure what role Izzy has in this latest abduction and how involved she was in the events of the past.

Chavez stays true to brand in her latest thriller, infusing her story of sisterhood with twists, turns, and taut suspense that will keep you reading well past your bedtime. In this interview with The Big Thrill, she gives us insight into how she crafts the kinds of thrillers that leave you no choice but to turn the page.

As far as sophomore books go, BLOOD WILL TELL is pretty much the perfect follow-up to No Bad Deed—we’ve got another twisty plot with fabulous characters, high suspense, and family dynamics at its core. I’d love to hear more about the inspiration for this story.

My books usually evolve from the premise. Then I dive into deciding whose story it is to tell and pin down that character’s emotional core. What drives them? What misconception leads them to make mistakes? What’s their blind spot? This book evolved a little differently in that Frankie and Izzy’s relationship was always going to be the heart of the book. In this case, the premise came third. Once I flashed on the sisters as the story’s core, I went to work figuring out how best to torture them—what event would put them most at odds with one another?

I’m the older sister in my family, but over the years, I feel as though my sister is the better protector—and like Izzy, I’ve probably tested her loyalty a few times over the years. What did you use as a model for Izzy and Frankie’s close, but somewhat tenuous, relationship? Are the characters based on people you know?

I lost my older sister years ago, and I’ve always wanted to explore the complex dynamic that can exist between sisters. My sister and I were so different, and yet so bonded too. While I drew on complicated memories and emotions, at that age, neither of us was strictly a Frankie or an Izzy. My sister had Frankie’s math brain but was also more impulsive like Izzy. Like Frankie, she also always knew she wanted to be a mom. In comparison, I was the introvert who kept her secrets closely and was terrified of children. So there was a little of both characters in each of us.

Both girls are well developed—flawed and deeply complex. Was one easier to write than the other? If so, why?

Frankie was easier to write because I was in her head for most of the book. I didn’t delve as deeply into Izzy’s POV, primarily because there’s a lot she doesn’t remember—or that she’s deliberately covering up. Keeping Izzy at a distance, I was able to connect more easily with Frankie’s frustration in not being able to tell if her sister is lying. All that said, there’s also something really fun about writing a character who causes trouble.

Writing about family is a theme in your work—what about “family” is compelling to you as a novelist? Why do you think these stories resonate with readers?

To fall in love with a story—and be able to read it as many times as is required when writing a book—there has to be something in it that speaks to me on an emotional level. With No Bad Deed, for instance, I was struggling with the demands of an erratic work schedule and time apart from my children. At the time, I would often go days without seeing my family, so there were a lot of deep feelings around that. In BLOOD WILL TELL, as I mentioned, I drew on my complicated bond with my sister. I also find inspiration in the smaller but still meaningful moments. For instance, there really was a Mr. Carrots, Julian’s stuffed rabbit, though the real-life version was named Bun Bun.

As the story unfolds, we learn a bit about a game that some of the characters played in the past that has some present-day consequences. Without spoilers, what can you share about how that history has shaped your two main characters? Was there a bit of a lesson in there for readers?

Oh, the game scenes. I loved writing those and exploring the long-term repercussions of the choices made that night. On a side note, my daughter was my first reader for those scenes. She would warn me if I was slipping into “mom” language. As for lessons in that scene, it really echoes many of the themes explored elsewhere in the book. Trust. Moral obligation to yourself versus others. And, of course, on a much more superficial level, I’ve always been entertained in books or movies when someone suggests they play a game. Outside of picture books, that never ends well.

Above, I mention that BLOOD WILL TELL is a twisty thriller (with a whopper of an ending)—which is certainly the case for your debut book as well. As you know, The Big Thrill is as much for aspiring writers as it is readers. What advice would you give about crafting those twists?

Twists and reveals that arise from character are far more gratifying than those driven by plot. I’m an outliner, so I know my big twists before writing the first word. But it’s during revision that I make sure I’ve fully supported the twists. I don’t want a flashing neon sign alerting readers to what’s coming, but neither do I want them scratching their head at the end of the book. Twists and reveals need to be earned.

Writing Book 2 is hard at any time, but I imagine crafting a follow-up novel during the pandemic just added to the challenge. How did you overcome that double whammy to produce such a page-turning tale? Any lessons on perseverance you’d like to pass on?

I have a day job in health care communications, and both my husband and son are in patient care, so the pandemic was intense for our family even without Book 2 deadlines. With so much going on in the world, it was also hard to focus on writing or sharing positive news about the publishing journey. But writing has always been a way for me to recharge, too, so while writing during this time was challenging, it also served as catharsis and a much-needed distraction.

What novels would we find on your nightstand right now? What is teed up on Netflix as your next binge watch?

I’m so behind on my reading and have been looking forward to Tessa Wegert’s Dead Wind for what feels like forever. I also can’t wait to read Kellye Garrett’s Like A Sister and Samantha Bailey’s Watch out for Her. As for binge-ing, I just finished the brilliant Severance and am starting Pieces of Her because Karen Slaughter is a master.

Two books in, and you’re already building a solid brand as a domestic thriller / suspense writer to watch. What do you love about the genre?

Domestic suspense taps into our morbid curiosities and our fears—what motivates an apparently ordinary person to commit an unspeakable act? And what lengths would we go to to protect our loved ones from being on the receiving end of that harm? As a reader, I’m drawn to the intensely personal stakes of the genre. As a writer, I love peering behind closed doors or into a character’s darkest thoughts—those spaces we’re never really allowed access.

Is there anything you can share about what you’re working on next?

I can’t wait to share every detail about what’s next, but for now, all I can say is another thriller is on its way, and I hope readers fall in love with the characters the way that I did.