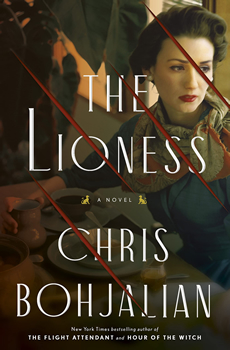 As any writer will tell you, the inspiration for the next novel is never guaranteed. Finding the right idea can be a slow and tortuous process. But not so on this occasion for the multiple #1 New York Times bestselling author Chris Bohjalian. He can pinpoint the exact moment that his idea for his latest release, THE LIONESS, took hold. “It was,” he says, “born in a movie theater. I emerged from a matinee in August 2019, squinting against the high summer sun, and thought to myself, “My God, I love movies. Why have I never written a Hollywood novel?””

Fans of Bohjalian know to expect the unexpected from his page-turning books, and THE LIONESS is no exception. Yes, it is indeed a Hollywood novel—but one that is set in Tanzania in 1964. The newly married A-list actress Katie Barstow has chosen a safari honeymoon in the Serengeti. She and her husband have invited a select group of family and industry friends to join them on their luxurious adventure. It promises to be a trip of a lifetime.

And so it is—until a group of Russian mercenaries emerge from the bush and open fire. In the ensuing carnage, Katie and her entourage are kidnapped by the armed men. The honeymoon is over, and instead, everyone is in a fight for their lives. It’s not a spoiler to say that several group members lose that fight in a variety of gruesome ways. “I was originally thinking the book would be The Poisonwood Bible meets And Then There Were None,” Bohjalian says. “But now, thanks to Jordy’s Book Club, I view it more as The Seven Husbands of Evelyn Hugo meets Jurassic Park.”

The story of THE LIONESS is told from multiple points of view and in several time and location hops, immersing the reader in each of the characters’ backstories. The more we know about a character, the more we root for them and want to find out what happens. It’s a technique that ratchets up the tension. “One of the emotions that keeps you turning the pages is dread,” Bohjalian says. “I know so many of my favorite novels, movies, and TV series live at the nexus of anxiety and fear. I depend on my characters to take me by the hand and lead me through the dark of the story.”

Those backstories are all of course taking place in the world of 1964 and preceding years, so Bohjalian had to make sure his worlds were credible. This isn’t anything new for him. On his long and varied list of published novels, historical fiction features heavily. Hour of the Witch was set in Boston in 1662 and Skeletons at the Feast at the end of WWII. With any historical setting comes a hefty commitment to research, especially when choosing to write about such disparate time periods.

It’s a commitment that he enjoys. “I write about any subject or place or time in history that happens to interest me. Originally, The Flight Attendant (his contemporary bestseller that is now an HBO Max TV series) was going to be historical fiction: I was going to set it in the early 1960s.

“The keys to getting it right are doing one’s homework and really sweating the details,” he says. “For THE LIONESS, that meant knowing such things as what the movie theaters were like in Nairobi in 1964, what it was like to fly on a Pan Am 707 back then, and how safari guides transported their guns while in the Serengeti.”

And he also went to visit his primary location. Just three months after his movie visit, November 2019 saw him on safari in the Serengeti with his wife.  “The safari was more beautiful and moving than I had imagined. Almost everything the animals do in the novel—other than when they are devouring human beings—are things we witnessed. You don’t forget seeing a lioness with her cubs in the wild, herds of pacing giraffes, or the frantic crossing of the Mara River by hordes of wildebeest and zebras.  And, yes, we saw a lioness take down one and crocodiles pull two others under the water.”

November 2019 now feels like a world apart in more ways than one, for the global COVID-19 pandemic hit in early 2020. Like so many millions of others, Bohjalian found himself in lockdown with his family and acknowledges how fortunate his position was.  “The pandemic was (and is) a soul-crushing experience. By the time this article is published, likely one million Americans alone will have died of COVID. ER doctors—ER doctors who see it all!—have been traumatized. Parents and children endured an innermost ring of Dante’s Inferno known as Zoom school. Careers were gutted. Obliterated. I lost my voice in March 2020, and it is a shell of what it once was.”

Writing THE LIONESS was a welcome reprieve from the world outside. “I did what I have done almost every day of my adult life when not on tour or traveling: I wrote,” he says. “And, yes, it was lovely to be writing about a world where people weren’t dying of a virus we didn’t yet understand; it wasn’t only that I was writing about the Serengeti that was helpful emotionally. It was that I was writing about 1964.”

But amongst his historical research, Bohjalian found something that felt horribly current: the influenza pandemic of 1957-1958. That outbreak of disease killed over a million people worldwide, and 116,000 people lost their lives in the United States. One of his characters in THE LIONESS, Billy Stepanov, is a therapist. So Bohjalian included among the fictional Stepanov’s patients people who had been on the front lines of that smaller pandemic. “Readers, I knew when I added that scene, would liken it to their own traumas and losses in 2020 and 2021.”

Now we’re in 2022, and Bohjalian already has other projects in development.

“Look for a novel called The Princess of Las Vegas in 2023,” he says. “Also, I plan to write a new play this summer (my third) and will be thrilled if some more of my books that are currently in development for movies and TV series get a green light.”

He is pleased to report too that he will be back out on tour to promote THE LIONESS and reconnecting face to face with readers, which he loves.

He acknowledges that the real Serengeti will always stay with him. In earlier drafts of THE LIONESS, he wrote “a few scenes about the beauty of being ‘away’ from what we call the modern world: the wondrous sense of how small we are and how much of what we think is of great consequence really isn’t.”

But Bohjalian, the master storyteller, cut them. “The scenes felt too much like me and not like my characters, and—as they say—sometimes you just have to kill your darlings.”