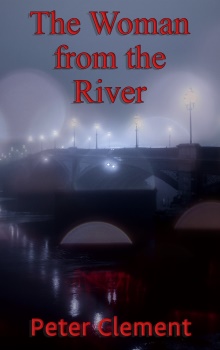 During the darkest winter, two disparate lives intersect through the mysterious woman in the river.

In 1975, Montreal is changing. Dr. James McKnight, wunderkind of the ER in a prestigious hospital, is finding it difficult to play well with others as he works hard at delivering medical miracles. When a beautiful woman who died by suicide ends up in his morgue, things start to spiral out of control, for him and her only friend Benny, a reclusive man with mental illness.

Benny holds the key to the identity of the woman, and the two men must trust each other to stop a crooked cop, a brutal gang, and the evil voices inside Benny before they both lose everything.

Peter Clement recently spent some time with The Big Thrill discussing his latest thriller, THE WOMAN FROM THE RIVER:

Character. The story was inspired by two events in my career as a physician that haunt me to this day. The main characters were suggested by these events, and then they shaped the story.

It lets me give the reader the experience of being inside the head of an emergency physician along with the suspense of a thriller.

Dick Francis. I was reading Bone Crack, which puts you inside a jockey’s head in a steeplechase race. I wanted to put the reader inside a doctor’s head during a cardiac arrest resuscitation in ER.

Q: How does an ER doctor survive the constant trauma and heartache of cases that don’t end well?

A: What kept me going was knowing that, however the case turned out, we, as a team, had done all that could be done. When you know that, you can live with what happened, no matter how tragic the loss, and go on to the next case.

Writing from a frame of reference of 20 years in the ER, Peter Clement has written eight books that bring readers inside the world of emergency medicine. With fast-paced action and true-to-life dialogue, Clement gives a riveting view of science and medical practice in novels of stunning suspense.

From the bestselling Earl Garnet series—Lethal Practice, Death Rounds, The Procedure, Mortal Remains, and The Inquisitor—through the Richard Steele books—Mutant, an examination of genetic manipulation as a bioterrorism weapon, and its sequel, Critical Condition, a foray into the amazing universe of stem cell research—his stories soar above and beyond any cautionary classification. Clement’s eighth book, The Darkness Drops, which released in 2010, was extraordinarily prescient, foretelling the arrival of a never before seen disease that originates in China and sweeps the world to its knees.

From his home near Montreal, he continues to combine his practice of medicine and writing.

The Last of Her by Brent Spencer