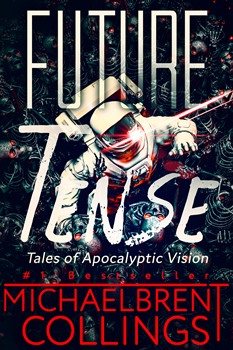 Worldwide bestseller and master of terror Michaelbrent Collings invites you to peer into the future, to uncover things long hidden, and to experience worlds of a Future Tense…

A home where secrets abound—until the killing begins…

All these, and more: stories of darkness and of light.

Stories of despair, and lingering hope.

Stories of a future unknown, where ignorance feeds our souls, and where the only hope that remains in a world gone dim… resides in TALES OF APOCALYPTIC VISION!

Michaelbrent Collings, a double Bram Stoker Award finalist and voted one of the Top 100 All-Time Greatest Horror Writers by Ranker, invites you to brave a future unlike any you have experienced. Because the future is what we make of it… and we have made a monster.

Since it’s a short story collection, all of them! Each one has a particular history, and particular thoughts behind it; one of the best parts of putting this project together was putting a short author’s note at the end of each tale to talk about where, when, and/or why I wrote it. 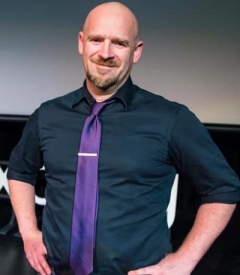 Horror is home base for me. My father was THE world expert on Stephen King for about 20 years—the first person to write a book-length academic study of his work, in fact—so I grew up with typing and screaming in the next room.

Each time I write a short story, I approach it with a bit of dread—it’s just not what I do, day to day (novels and screenplays are my bread and butter). And each time I write one, I’m reminded how fun it can be… especially when you stick the landing, since the end of a short piece is so critical to the success or failure of the entire work.

There’s a HUGE surprise in there for fans of my I Am Legion series of horror/thrillers – for the first time in over a decade, I’ve made available my short fiction piece called “The Stranger Inside,” which was the genesis for my most popular series!

Q: Is it hard to type, knowing that you’re so sexy?

A: So… you’ve never seen me, obviously. Writing is easy when you have a face made for typing. With your face.

What was the most important criteria in your story selection process?

Makin’ it cool. Books have a lot to say, and are tremendously important to build up themes and meaning, to reflect our society back on itself and (hopefully) solve problems we face. But they should also be FUN!

While he is best known for horror (and is one of the most successful indie horror authors in the world), Michaelbrent Collings has also written internationally-bestselling thriller, fantasy, science fiction, mystery, humor, young adult, and middle grade works, and romance.

In addition to being a bestselling novelist, Michaelbrent has also received critical acclaim: he is the only person who has ever been a finalist for a Bram Stoker Award, a Dragon Award, and a RONE Award, and he and his work have been reviewed and/or featured on everything from Publishers Weekly to Scream Magazine to NPR. An engaging and entertaining speaker, he is also a frequent guest at comic cons and on writing podcasts like Six Figure Authors, The Creative Penn, Writing Excuses, and others.