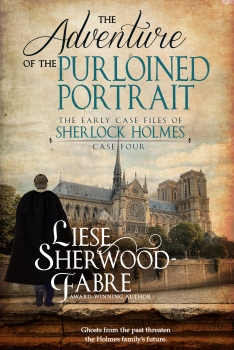 A long-buried secret. A stolen portrait. The artist’s murder. Can Sherlock discover the connection between the three before he’s stopped permanently?

Sherlock can’t shake his apprehension about a family trip to Paris. His mother’s unflappable confidence vanished months ago, and her anxiety has set the whole family on edge. His greatest fears are realized when they witness the death of one of Mrs. Holmes’s former suitors.

As Sherlock seeks to unravel the reason behind the artist’s murder, he unearths a long-buried secret about his mother and survives several attempts to keep him from getting to the truth.

Can he bring a murderer to justice before he’s buried with these hidden secrets forever?

Liese Sherwood-Fabre recently spent some time with The Big Thrill discussing her latest mystery, THE ADVENTURE OF THE PURLOINED PORTRAIT:

Because this series is based on the original Sherlock Holmes character, I began with what we know about the adult Holmes. Based on the twenty-something Holmes and knowing a bit about his background, I wove the series with the goal of explaining how the boy became the man. 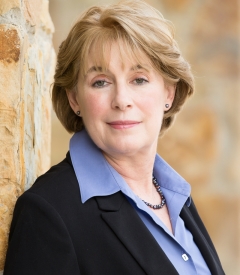 I’ve always been drawn to the mystery genre. I read as many of the Nancy Drew and Trixie Belden books as my babysitting income permitted. Following along with the protagonist as clues are presented and putting them together to solve the mystery before the end appeals to my deductive nature.

The biggest challenge (and of course, the biggest opportunity) for historical fiction is weaving fact into the story. In the original tales, Holmes mentions his grandmother was the sister of Horace Vernet, the French painter. While Vernet passed before Sherlock was born, his widow was still alive and living in Paris. In this case, Sherlock travels to Paris for the summer and is introduced to his great-step-aunt Marie Vernet. Including details about her life as well as Victorian Paris in general provides authenticity but requires a great deal of research to ensure accuracy.

I was fascinated by the Paris art world and the auction houses—in particular the role of the Hotel Drouot, the largest auction house. After learning about this institution, I’ve put it on my list of offbeat places to visit in the City of Lights.

Liese Sherwood-Fabre knew she was destined to write when she got an A+ in the second grade for her story about Dick, Jane, and Sally’s ruined picnic. After obtaining her PhD, she joined the federal government and worked and lived internationally for more than fifteen years. Returning to the States, she seriously pursued her writing career, garnering such awards as a finalist in RWA’s Golden Heart contest and a Pushcart Prize nomination. A recognized Sherlockian scholar, her essays have appeared in scion newsletters, the Baker Street Journal, and Canadian Holmes. She has recently turned this passion into an origin story series on Sherlock Holmes. The Adventure of the Murdered Midwife, the first book in The Early Case Files of Sherlock Holmes series, was the CIBA Mystery and Mayhem 2020 winner.

To learn more about this author and her work, please visit her website.