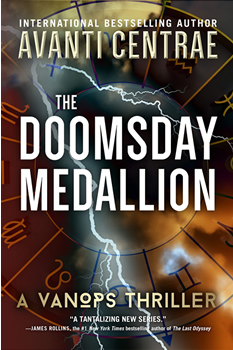 The third book in Avanti Centrae’s VanOps series, THE DOOMSDAY MEDALLION, is an intricately woven tapestry of science, world history, geography, and mythology, infused with action and adventure. The story is fast paced, the characters immediately relatable and intriguing with their varied skill sets, tragic personal history, and relationships that represent the diversity of real life. Lush description imbues the story with authenticity and transports the reader to locales around the globe.

Centrae’s prologue introduces a mysterious “watcher” stalking a young woman in France—but it isn’t long before we meet Maddie, a recent addition to the VanOps family of operatives based in the US. While she and her twin brother, Will, race down the ski slope of Alpine Meadows by Lake Tahoe, we learn more about their tenacity and competitive nature. Soon, Maddie and Will are tasked with a VanOps mission to save America and her allies from imminent destruction.

Central to their assignment is Nostradamus, a 16th century French prophet who predicted World War II and other significant historical events. He is believed to have left clues hidden somewhere in the world that are crucial to the success of the assignment the VanOps team has been given.

Reminiscent of James Rollins and Steve Berry’s novels, this book will keep you on the edge of your seat and the television turned off until you finish this fabulous page turner.

Below are questions Centrae answered in an exclusive interview for The Big Thrill.

Your bio says you’ve traveled the world. Have you visited all of the locales in your VanOps series?

Growing up, I had a wicked case of wanderlust. At family holidays, I’d pull my grandparents’ wooden globe stand next to my chair to escape into my imagination. I’d trot around the world, exploring ancient temples, far-away cities, and exotic mountain ranges. After college, I worked hard, saved up, and finally had the opportunity to start traveling. Most of the settings in the VanOps series are indeed places that I’ve visited. But if a story calls for a place I haven’t yet been and can’t get to, readers report that I’m able to leverage past travels and research to make the scenes come alive with sights, sounds, tastes, and smells.

Do you have a favorite adventure that occurred while conducting research for your novel?

One morning in Athens, a portly, dark-haired innkeeper banged on the door of the room we had fled to the night before while escaping the attentions of a drunk Brit, then kicked us out and chased us down a narrow cobblestoned street waving his fists, yelling “no guests allowed.” Less adventurous but more in the line of “favorite,” I spent some time haunting Nice, Monte Carlo, Marseilles, and other locations in the south of France along the Mediterranean. The gorgeous harbors there, filled with Playboy-style yachts, fine sailboats, grungy fishing vessels, and sleek jet skis, inspired one of the longest action scenes I’ve ever written, which plays out toward the middle of THE DOOMSDAY MEDALLION.

Bear is a great nickname given the physical attributes of Maddy’s boyfriend. That said, why did you choose to focus on his physical characteristics and not his intellectual abilities given his extensive knowledge of world history?

Maddy Marshall, her twin brother Will Argones, and Bear Thorenson went to high school together in the Lake Tahoe region of Northern California. Among people that have known each other since childhood, I’ve found nicknames are commonly formed in school, and decided the genesis of Bear’s nickname would be no exception. Although he also poured over National Geographic magazines in his tree house as a kid, he got the nickname after saving his younger brother from a dangerous bear while they were camping. The full story is recounted in The Lost Power. Marshall and Argones are both quite bright, too. She’s a computer geek with special martial-arts abilities, and he’s an engineer. Bear is the most physically grounded of the trio. Besides, I like playing with stereotypes and enjoyed giving a burly name to a broad-shouldered, bristly-haired Marine with a strong intellect. It seemed to fit.

In your opinion, what is the biggest mistake aspiring authors make?

Anytime we take on a new endeavor, we make mistakes as part of the learning process. I think authors in general understand they need to excel at their craft. Where I see the biggest challenge, and where many authors have room for improvement, is on the marketing and PR side. I’ll never forget the advice I received from USA Today bestselling author Ann Charles when I won my first blue ribbon. She was at the conference after the award ceremony, and I asked her for one piece of advice. She replied something to the effect of “marketing and PR will eat you alive if you let it.” I thought she was kidding but have found much truth in her words. My experience has been that breaking out, no matter your publishing path, usually begins as a pay-to-play model, where the author covers much of the cost of publicity and marketing. Authors that expect their publisher to do it all or don’t have an appetite for that side of the business will probably have a disappointing writing career.

The path to publication can be difficult. Could you please tell the readers about your journey?

Getting published can indeed be a climbing-Mount-Everest-type challenge. My journey began when I was quite young, with an inner conviction that I was going to be a writer someday. I wrote my first “book,” about a bull and a crimson cape, before I was ten. My parents recognized the challenges in the publishing industry and steered me toward a computer degree from Purdue, which subsidized all that traveling and a few fast sports cars. Eventually, I had a health scare and realized the wick of my life’s candle was burning down. At the top of my bucket list was writing a bestselling thriller. I’d been studying craft off and on for decades, and once I decided to dive in, I outlined The Lost Power in about a year. Not wanting to waste time with an unpublishable story, I reached out to several editors and obtained some thoughtful feedback. After rewriting the outline, I started letting the words flow. It took about a year to research and write the novel, another year to find an agent, and another year to get a book deal. Much to my surprise, my debut released as a Barnes & Noble bestseller, and is still selling strong. In retrospect, that overnight success sure did take a while.

How have your experiences as a former computer executive in Silicon Valley helped or hindered your writing?

While I was still working in that role, although it paid well, I considered it a hindrance, simply because the time commitment made it difficult to find a creative groove. But after I broke free of the golden handcuffs, I found the experiences to be an asset. From the fascinating characters I got to know to understanding the technology behind my realistic ripped-from-the-headlines plots, my former computer career helps me color my writing with authenticity.

In your career as an author, what writing decision are you most proud of? Least satisfied with?

I’m most proud of my initial decision to write and my daily decision to keep putting pen to paper. That pride extends to all authors, as getting words to flow from your imagination onto the page is truly a difficult endeavor. All authors face challenges, from finding time to write to overcoming rejection. We all need to let go of that lonely one-star review and appreciate all the four and five-star reviews and honors that we receive. Simply being known as an author fills my heart with pride. In terms of a decision that I’m least satisfied with, I think I spent too much time and money hiring publicists to promote my debut with radio shows and the like. I was uber-excited and went all out! My advice to newbies would be to temper that enthusiasm until you have a backlist or a series.

The detail and breadth of knowledge in your book is fabulous. Did you do extensive research, or do you have a life-long love of science, history, and geography?

I’ll grin and say “both.” I’ve long been fascinated by a cornucopia of subjects, including psychology, geography, world history, science, religions, and mythology. Many people have called me a big-picture thinker, and while that’s true, when I write, there’s also a need to dig deep into the nitty-gritty. For this novel, I read several biographies of Nostradamus and was shocked at how well his background fit in with my idea that he used a mysterious herbal formula to see the future. He really did devise a method of hiding his meanings by using word games like anagrams, and a mix of other languages, such as Italian, Greek, Latin, and Provençal. It’s also true that he had a walnut box that he passed on to his daughter, and no one knew what was inside. Not only that, but his predictions of the death of Henry II, the Great Fire of London, Napoleon’s conquest, the discoveries of Louis Pasteur, Hitler’s rule, and Charles de Gaulle’s reign were called out as “shockingly accurate” in a Business Insider article from 2014. After all that research, it wasn’t a stretch for me to postulate that several world powers would take extreme measures to get their hands on the old seer’s ability to tell the future.

Do you prefer to interview experts face to face, or with your extensive background in computers is most of your research done online? Any hints for writers who are tech challenged?

You nailed it. The vast majority of my research is online. I feel for authors who lived before the Internet age or those who are tech challenged today. In terms of helpful hints: books remain wonderful sources of information, libraries and librarians are true founts of knowledge, and one could consider hiring a research assistant to mine the Internet and extract nuggets of gold.

Avanti Centrae always wanted to be a writer. Her father served as a US Marine corporal in Okinawa, gathering military intelligence during the first decade after the Korean War, and her mom was a teacher. She grew up haunting silver bookmobiles in the Midwest, but her practical family urged her to get a degree in computer technology, which she did. Eventually, she became a Silicon Valley IT executive, but her heart wasn’t in it. Before her hair began to turn gray, she had a health scare, which forced her to face her own mortality. At the top of the bucket list was becoming a bestselling author. She decided to break free of the golden handcuffs to pursue her dream. After years of drafting, editing, and finding an agent and publisher, her debut, VanOps: The Lost Power, released as an instant Barnes and Noble Nook bestseller. It went on to win three literary awards. Solstice Shadows, VanOps #2, quickly became a #1 Amazon bestseller in the US and Canada before winning a bronze medal at the Readers’ Favorite book awards and nabbing the Chanticleer Global Thrillers Genre Grand Prize. She’s honored that her work has been compared to that of James Rollins, Steve Berry, Dan Brown, and Clive Cussler. When not travelling the world or hiking in the Sierra mountains, she’s writing her next breathtaking thriller in Northern California, helped by her family and distracted by her German shepherds.

The March 2022 Edition of The Big Thrill