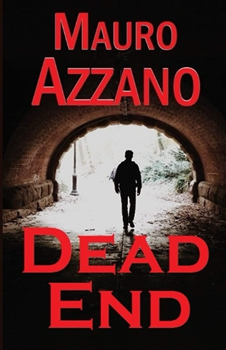 A body goes missing from the morgue and is later discovered in a parked car. Why was it taken? How did it get where it was found? And does it have anything to do with a missing undercover cop? In the fifth installment of Mauro Azzano’s Ian McBriar series, DEAD END, Ian leaves his badge and gun behind to find the answers before the killer finds him.

Azzano chose to write DEAD END using the first-person point of view. What are the advantages—and disadvantages—of that choice?

“The very first line of the first book,” he says, “started me down that path. Ian has been an alter ego and a mirror in some ways, so it seemed reasonable to speak through his voice. The good part of speaking in the first person is that the reader feels like a part of the action, rather than being told what they’re seeing. I found it easier to get into the ‘skin’ of the character as I wrote in first person; when I write, I ‘see’ the action, so being the eyes of the main character works for this series.

Ian has a pretty good sense of street fighting. Was this a reflection on Azzano’s knowledge of the art?

“If only,” he says. “I did grow up in an…interesting neighborhood but managed to avoid most fisticuffs. I took a few classes in martial arts, mostly for the exercise. If I had to give a one-line course in self-defense, I’d say that Rule One is to avoid fights. Rule Two is to only fight someone smaller than you, and Rule Three is to run faster than someone bigger than you. Beyond that, anything you expose can be broken or hurt, and recovery is far longer and more painful than in the movies.”

Azzano is a big fan of solving puzzles. What are his favorites, why, and how does that fascination relate to his writing?

“I’ve become addicted to sudoku,” he admits. “The logic of solving the placement of one number based on its relationship with several other numbers which have not been entered yet is intriguing. In a very analogous way to writing mysteries, the simplicity of the puzzle—and yet the maddening complexity of the solution—is engrossing.

“By the same token,” he says, “a mystery written simply, but with subtle clues and undertones, seems to me more enjoyable than a ‘punch-up and gun fight’ story.” To restate his love of puzzles, he adds, “I once rented a car, the first I’d driven with variable windshield wipers, and spent 20 minutes on a sunny day playing with the controls to decide whether they used a 555 or a 741 IC as a timer for the wipers.”

Azzano has three writing influences he speaks about: James Blish, Kurt Vonnegut, and Isaac Asimov. They’re not writers one would put into the “crime category.” What is it specifically about their work that influences his? What crime writers have influenced him and how?

“I did not grow up reading mysteries,” he says. “I owned several hundred science fiction books. The search for the unknown, the possible, and the ‘what if’ are universal to good fiction, whether it’s science fiction, mysteries, or any other genre. In fact, some time ago, my wife dared me to write a romance book. My publisher liked it, and we put it out under a pen name, complete with a photo of my wife and all. A Man for the Summer came out two years ago. It’s a romance novel, but still has mystery in it.

“Some years ago, I read The Deep by Mickey Spillane. I was drawn in by the story, and that it does not reveal the ending until the last word on the last page. I admired that craft. To hold an audience’s attention for 90,000 words and have them eagerly flipping to the next page is a pleasure.”

DEAD END is the fifth and final Ian McBriar novel. Why did Azzano decide to end the series, and what can we expect different in his upcoming Chris Bishop mysteries?

“I initially thought there would only be one Ian McBriar book,” he says. “But I was asked to write Death Works at Night as a sequel to explain some characters, and I realized there was a story I needed to tell all the way through. I decided that five books was the right length for the story, so I knew that DEAD END would be a double entendre. Ian was someone who had some of my persona—my love of cooking, jazz, etc. I always joke that he is taller, younger, and better looking than me.

“Ian is a ‘boy scout’; he plays by the rules and colors inside the lines. Chris Bishop comes from a darker background, and creating a ‘bible’ for him has been a treat. He is a flawed character, and it’s fun to put him in a situation where he has to choose between what’s easy and what’s right.”

Finally, if Azzano could put together his dream panel for ThrillerFest—participants need not be living to be invited—who would he pick to be on the panel, why, and what would the topic be?

“I’d love to have coffee with Agatha Christie, Lee Child, Dashiell Hammett, and Linwood Barclay,” he says. “I might feel like the small guy on the basketball team, but it would still be a great experience. Lee Child writes intense fight scenes and gets into the nitty gritty of hardware more than I do. Linwood Barclay, who was reviewed in the same newspaper as my first book, creates a mysterious air in his scenes. He has a way of coming at events from around the corner rather than face-on. Ms. Christie was a genius at misdirection, a lady who did card tricks on paper with her characters.

“Dashiell Hammett wrote everything from The Thin Man to The Maltese Falcon. He had eclectic views on everything from politics to relationships, and I could see sharing a long evening talking to him.”

On that last part, you’re not alone. I’ll buy the whisky.

Mauro Azzano was born in the Veneto region of Italy. He grew up in Italy, Australia, and eastern Canada, finally settling on Canada’s West Coast near Vancouver.

When he’s not writing he can be found teaching college or running half marathons.

The Ambulance Chaser by Brian Cuban