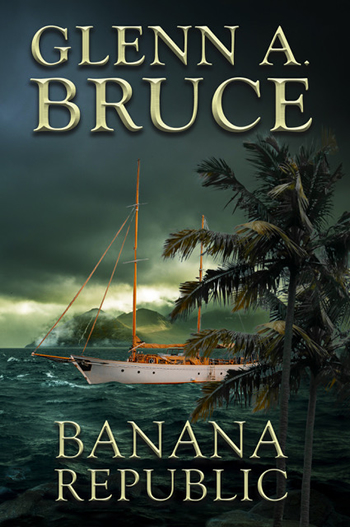 Ah, 1979. The year Pink Floyd released The Wall, the Muppets hit the big screen, and two young members of the Canadian press invented a little game called Trivial Pursuit. It’s also the year Glenn A. Bruce began his career as a professional writer. After playing in rock bands into his 20s, the Miami, Florida, native moved to the City of Angels, where he spent the next 21 years writing for television and movies. His credits include Kickboxer, Baywatch, and Walker: Texas Ranger. Now he writes novels and teaches screenwriting and acting for the camera at North Carolina’s Appalachian State University.

When it comes to his writing, Bruce is a Renaissance man, writing in a variety of formats and genres. Asked what led him to crime writing, he says, “I wrote a novel titled Riverbend about a male and female FBI ‘team’ who don’t get along while trying to capture a notorious serial killer. It was very dark—and very funny at times.”

He let himself have fun with the characters, giving them “quirks and foibles” and creating a genuine, complex relationship between them. “That made the genre immensely more interesting to me,” he says, “and has therefore carried over into all my crime fiction novels.”

Asked how his screenwriting experience influences his writing, Bruce says, “Pacing, mainly. Movies have to keep going. You can write a few pensive or quiet moments in a thriller or action film, but they can’t be too long or too far away from the story. That said, one of the great luxuries of writing novels is that we can spend more time on side trips, which allow for greater characterization and humanity by allowing the characters to be more fully developed and three dimensional.”

Even so, it’s important to keep the story moving. “Keeping those side trips fresh, interesting, and at least loosely related to some aspect of the overall plot and storylines works well while offering a breather from the locomotive nature of the genre.” 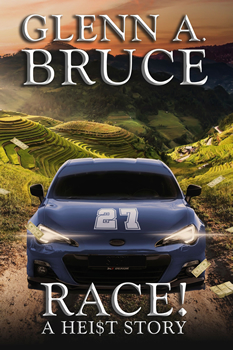 He also finds that a well-written screenplay provides a perfect three-act structure for a novel. “Since I don’t write outlines on their own,” he says, “screenplays serve that purpose for me in spades. If the screenplay works, it’s likely that the (expanded) novel will have a fighting chance of working as well.”

One of the hallmarks of Bruce’s work—dialogue—is also influenced by his screenwriting career. After taking a class with the legendary Syd Field, Bruce also took camera acting classes. Unfortunately, early on, he didn’t have much money for classes. Ever resourceful, Bruce made a deal with his acting coach. In return for lessons, Bruce would write scenes his instructor could use in class.

Bruce says, “He always needed new material to keep it fresh for him as well as his students. The thing was, he made it ‘expensive,’ in that I had to write seven two-to-three-page scenes every week. It was brutal. But the good news was that I got to hear, immediately, what my words sounded like by seeing those scenes done in class just days after I wrote them. I literally wrote hundreds of scenes, which ‘taught’ my ear to hear in my head how people really speak, how to make each person’s speech patterns slightly different than the other characters, and how to imbue each round of dialogue with some little flair that keeps it moving and interesting. Also, to never put the word ‘particularly’ into the mouth of an actor. They will hate you.”

His process seems to be working for him. Bruce has two new books out: Banana Republic and RACE! A COLORFUEL HEI$T STORY.

Banana Republic was inspired by a Jimmy Buffet song and was 35 years in the making.

“While living in LA, in Manhattan Beach, I had just turned onto my street when Jimmy Buffett’s song ‘Banana Republics’ came on the radio,” Bruce says. “I had never heard it before as I was never much of a Buffett fan. But something about the mood and tone of the piece caught my ear. So I parked at my house and had a ‘driveway moment’ in which the entire premise for the story came to me by the end of the song. As I often do, I wrote it as a screenplay first, which was immediately optioned but never made. About 20 years later, I wrote the first draft of a novel from the screenplay. But it took another 15 years to get it right. Now I love it. Finally!”

The book is a survival story—a decent man framed and targeted by a brutal drug dealer. Bruce creates a relentless sense of urgency by raising the stakes with each chapter and continuing to build on the premise, plot, and storylines. It all comes together for the big climax.

“But along the way,” he says, “the reader needs to feel the same pressure that the characters feel. In Richie Makepeace’s case, he gets in deeper and deeper . . . and he knows there is nothing he can do to prevent something awful happening.”

RACE! A COLORFUEL HEI$T STORY came from a completely different place. “I was living in the mountains of NW NC, managing a tennis club,” he says. “My maintenance man, a great guy named John Eller, invited me and my then wife to see his son race his Late Model Unlimited dirt track car. We were hooked! At some point, I started writing the dirt track opening scenes based on what I’d learned about the sport. I placed a couple who were very out of place at the race they attended—and then found out why they were there. The rest unfolded as I worked through that complex, multi-layered, two-decade tale that became a cool heist story with roots in the Vietnam War.”

RACE! is a gritty exploration of race, culture, family violence, and vengeance. Bruce says, “The race element was critical for me, thus the play on the title. I wanted to delve into our horrible record of race relations in America by having a diverse cast of African American, Asian, and Caucasian characters thrown together in a high-stakes race to accomplish the impossible. In many ways, they never truly get along, their own cultural isms playing into their inability to accept each other in any meaningful way. In the end, the more extreme racist elements play out to no one good end—at least for the bad guys. So it became an interesting storytelling puzzle to solve—the heist and the personal relationships of this large, diverse group of people attempting to get vengeance as well as millions of dollars in jewels.”

Asked what he’s working on now, Bruce says, “I’m closing in on a first draft of another thriller, The Beat, about a gruff Baltimore police detective who must work his way through a baffling series of circumstances and information that may or may not have anything to do with each other. So there’s more procedural stuff in it than usual. I think I might write another western to add to my Lawrence ‘Honcho’ Taylor western adventure series, and possibly another horror novella to follow My Worst Nightmare: The Dead of Night. Beyond those, I have several others in various stages of development to pursue when they feel right.”

Glenn A. Bruce, MFA, is the author of the political thriller Last Blast (World Castle Publishing, 2021) as well as He Rode, Three Rode, Three Rode On, He Rode Alone, and He Kept On (Dusty Saddle Publications, 2020-2021), with Banana Republic, Race!, Rubric, and The Man coming soon (Evolved Publishing 2021-2022). World Castle will also publish his thriller The Pull later this year, and Raven Tale will be publishing his horror novella My Worst Nightmare: the Dead of Night and DSP publishing his three-part series Morse & Vasquez. Glenn has had over 50 short stories, essays, and poems published in the US, Britain, Canada, Australia, France, and India, and has won awards for writing, screenwriting, and directing. He wrote the hit movie Kickboxer, episodes of Walker: Texas Ranger, Baywatch, and the original G.L.O.W. Show, and taught screenwriting at Appalachian State University for over twelve years. He lives in Florida where he just completed his 25th novel.

Between the Lines: Alice Henderson

Stalker On The Levels by David Hodges