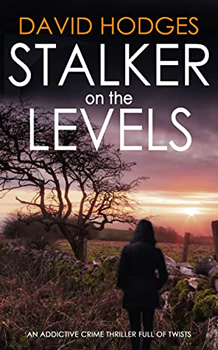 STALKER ON THE LEVELS is the 15th crime novel and the ninth in the Somerset Murder Series by former Thames Valley Police Superintendent, David Hodges.

Famous crime novelist Tamara Callaghan is on her patio late one night when a naked man with a hood over his head erupts from the woods. Tamara runs back inside the house and slams shut the patio door behind her. When she looks back, the man is pressed up against the glass.

Later, at a book signing, every copy of Tamara’s new novel is slashed to shreds.

It’s clear someone is out to get her. Detective Kate Hamblin is called in to investigate. But things take a grisly turn when the flasher’s body is found in an old, converted barn nearby. “SORRY” is scrawled on the floor beneath him. Kate isn’t convinced it’s suicide.

The team might not only be dealing with a stalker on the Levels, but also a murderer . . .

Thirty years of police experience has given Hodges the unique position of offering an authentic balance of truth and reality in the crime genre, “influenced,” as he says “…by my early childhood, reading Sat Rohmer’s Fu Manchu and Conan Doyle’s Sherlock Holmes.”

Authoring 15 books, a celebrated autobiography, and numerous essays has honed a writer who still welcomes each story as a challenge.

“As always, my novels have quite complicated plots. (For) STALKER ON THE LEVELS … the biggest challenge was to create a unique story. The biggest opportunity was to create a female heroine who was fallible…someone ordinary.”

STALKER ON THE LEVELS took shape around them with “the mysterious evocative setting of the wild, misty Somerset Levels” and moors. No surprise, then, that the setting, characters, and story-line bring “UK policing as experienced personally into ‘reality’ focus, away from the siren screeching, gun-toting cops to the real-world police officers and the real policing culture with all its warts,” Hodges says. “Gritty human stories with a twist or a series of twists.”

As the story unfolded itself to Hodges, it overtook his “pre-conceived ideas of what was going to happen” into a state close to freefall. “The plot carried me away with it, so that the book took the lead rather than the other way about,” he says.

Asked to share something about STALKER ON THE LEVELS not found in the jacket copy or PR package, Hodges was happy to oblige.

“The effort and pressure that goes into the actual writing. The work to build up the suspense and capitalize on the character’s traits and to ensure that the story-line and the background of the key fictitious participants remained consistent with that of the eight previous books.”

Yet, he’s quick to point out that his thrillers are not police procedurals.

“My books deal with police investigations and are reasonably accurate, but I adopt some poetic license to meet the requirements of the plot,” he says. “They are first and foremost thrillers. If I concentrated on full police procedure, you’d be bored to tears.”

He should know. After 30 years of law enforcement during which he served in an armed Tactical Support Group, held responsibility for armed security at Chequers, the British Prime Minister’s country residence, won First Prize and Gold Medal in the Queen’s Police Gold Medal Essay Competition, and retired with the Exemplary Long Service Medal, Hodges opened Alcatraz, an alcohol-free pub, in Aylesbury, Buckinghamshire.

No one can grow up to be a writer in a vacuum from fellow-writers and Hodges is no exception, admitting to the childhood influences of “Sax Rohmer’s Fu Manchu, Conan Doyle’s Sherlock Holmes and Sapper’s Bulldog Drummond.” He “always intended writing period fantasies. But as I matured, writers like Ian Rankin (Rebus), Colin Dexter’s Morse, and Lee Child’s Reacher series (took over)—all completely different to my own style, but nevertheless relevant and inspiring.”

Hodges candidly explains why he is not temperamentally suited to co-authoring, having his “…own set ideas. I would want things done my way. I couldn’t easily meet the expectations of others. If you like, I am elderly, grumpy, and intolerant at times and not really a team player, (sharing) a similar attitude with my old, trusted mentor, the late great Colin Dexter.”

The Somerset Murder Series, set on the mist-shrouded Somerset Levels in England, has attained a worldwide following. The last novel in the Series, Witch Fire on the Levels, was brought out by Joffe Books for Halloween 2020. Audible have now also released the first six published thrillers in the series and September 2021 saw David’s debut short crime story, “Creeper on the Levels,” published by Joffe Books in a Murder Mystery & Suspense Short Story Collection box set, which at the time of writing is available free on Amazon.

David has two married daughters and four grandchildren, and lives in the UK with his wife, Elizabeth, where he continues to indulge his passion for thriller writing and pursue his keen interest in “oil painting, sketching,  wild-life and preservation of habitats, global ecological problems, an almost pathological love of trees and the re-forestation of the planet, and a keen gardener and member of the National Trust and the Welsh equivalent, CADW.”

His passion for writing can be summed up in his answer to how long he’ll keep writing: “Until my toes turn up!”

A former superintendent with Thames Valley Police, David Hodges is a prolific crime writer and author of fourteen crime novels plus an autobiography on his life in the police service. His debut crime novel received critical media acclaim and a welcome accolade from Inspector Morse’s creator, the late great Colin Dexter, and since then he has become the author of several successful stand-alone thrillers, including BLAST and TARGET (Lume Books).

In particular, his Somerset Murder Series (Joffe Books), set on the mist-shrouded Somerset Levels in England and featuring the exploits of feisty detective, Kate, and her easy-going partner, Hayden, has gone from strength to strength, attracting keen interest in Europe, the USA and Australia as well as in Britain, with the last novel in the Series, WITCH FIRE ON THE LEVELS, being published by Joffe Books in October2020 in time for Hallowe’en. Audible have now also released the first six published thrillers in the series and September 2021 saw David’s debut short crime story, CREEPER ON THE LEVELS, published by Joffe Books in a ‘MURDER MYSTERY & SUSPENSE SHORT STORY COLLECTION box set, which at the time of writing is available free on amazon.

His new novel, STALKER ON THE LEVELS, is due to be published by Joffe Books on 24 November 2021.

David has two married daughters and four grandchildren and lives in the UK with his wife, Elizabeth, where he continues to indulge his passion for thriller writing and pursue his keen interest in the countryside.

The Ambulance Chaser by Brian Cuban