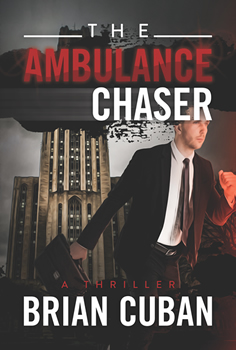 A good legal thriller will keep you guessing to the end. A great legal thriller is also fast paced with a character-driven plot. And that describes THE AMBULANCE CHASER, Brian Cuban’s debut release.

The action kicks off when a long-lost childhood friend of personal injury lawyer Jason Feldman contacts him. The buried remains of a high school classmate who went missing 30 years ago have been discovered. That revelation turns Feldman’s life upside down.

Despite his efforts to score cocaine and his need to care for his dementia-affected father, Jason Feldman is unquestionably a likeable guy.

Author Cuban says, “He understands human dynamics and the art of BS, while also wearing the mask of authenticity he needs to get clients and keep his new girlfriend. Whether Jason is a hero is multifaceted. He certainly starts out as an antihero to his family. Jason tries to be a hero to his father, but as readers will see, that comes with a heavy price.”

Like his protagonist, Cuban attended law school in Pittsburgh. It’s hard not to wonder how much of the novel is pulled from Cuban’s own life.

“While I’ve never been accused of murder, Jason’s struggles with drugs and alcohol are definitely drawn from my experiences struggling with addiction,” Cuban says. “Like my journey, Jason’s journey is not a straight line to recovery. My father, like Jason’s, also struggled with dementia before he passed. The rest of the book is my imagination playing the game of ‘What if?’”

One of the things that makes this a great legal thriller is that a lot of it doesn’t take place in a courtroom. That’s not an accident.

“As a plaintiff’s attorney, I saw many aspects of law and the business itself,” Cuban says, “and I wanted to incorporate the human element with the legal element, especially with a flawed protagonist who will do anything to avoid a courtroom. However, the pivotal moment in the novel does take place in a courtroom.”

The plot of THE AMBULANCE CHASER revolves around old secrets. In fact, the book makes a definite statement about old confidences.

As Cuban explains, “When a childhood secret hurts those we love, there is no difference between a reason and an excuse for not giving closure to those we injured.”

Before fiction, Cuban wrote articles for a variety of news outlets. For him, fiction is very different and more multifaceted than the nonfiction he’s written.

“I know my story backward and forward and have a solid knowledge foundation in the areas of addiction and mental health,” Cuban says. “When I began writing THE AMBULANCE CHASER, I was a blank slate, and learning as I went. From a fiction standpoint, I was also fortunate to have some wonderful mentors such as acclaimed novelist Bonnie Hearn Hill with whom I could share my ideas.”

The location, Pittsburgh, is almost one of the characters in this book. Cuban says there was never any question in his mind where this book would be set.

“While I have lived in Dallas many years,” Cuban says, “Pittsburgh will always be my home, and frankly when I dream, every dream is set there in my childhood. The genesis of THE AMBULANCE CHASER is a recurring dream set in Pittsburgh. The book is both an homage and a chance to highlight a city full of some really cool places to set scenes.”

But perhaps the signature positive factor of this novel is its characters. The book is filled with characters who are clearly vulnerable, especially the protagonist, Jason.

“I find it difficult to connect with characters who do not show their inner pain,” Cuban says, “and this is especially true for someone who might be stereotypically unsympathetic to a reader. Especially at the beginning of the book, Jason does some things that could make him unlikeable, and it was important to me to also highlight his humanity. With humanity comes vulnerability.”

You’ll want to get to know these people well, because this book is just the start of a series. Jason Feldman, as well as some other characters in the book, will absolutely make a return engagement. THE AMBULANCE CHASER ends with many things uncertain for Jason. I advise you to get in on the ground floor of this adventure right away.

Brian Cuban is an attorney, author, and mental health awareness and recovery advocate. He is the author of the Amazon best-selling book, The Addicted Lawyer, Tales of The Bar, Booze Blow & Redemption.

He has spoken at conferences, non-profit events, colleges and universities across the United States and in Canada. He also writes extensively on these subjects. His columns have appeared on CNN.com, Foxnews.com, The Huffington Post, The New York Times, and in online and print newspapers around the world.