Louise Penny says that plotting her bestselling mysteries about Chief Inspector Armand Gamache of the Quebec Sûreté is a balancing act.

“I know where the story is going, but I don’t want to hold my characters so firmly to the outline that they can’t breathe. As a result, there are always surprises.” For example, in the first draft of her newest book, THE MADNESS OF CROWDS, Penny didn’t refer to the COVID-19 pandemic until two-thirds of the way through.

“I thought it would be the last thing people would want to hear about after living through so much sadness,” she says. “But then I realized that my characters’ lives were as affected by the virus as we all have been. So, by the second draft, I mentioned it on page one!”

Set in a post-pandemic present—“a time of healing,” says Penny—the audiobook begins with Chief Inspector Gamache struggling to guard a scientist whose government-sponsored study has devolved into a mash-up of misinterpreted statistics and eugenics beliefs. When the Canadian government disassociates itself from the findings, the scientist goes public with her proposal for mandatory euthanasia of the disabled and elderly. Her speeches draw huge and fervent crowds. Soon, someone dies.

“The concept dovetailed perfectly with the idea of a virus,” Penny says. “Ideas and diseases both spread from person to person. They gain traction as they infect the population.”

The author of 18 novels about Gamache and his colleagues, family, and friends, Penny says that her books, which are “one ongoing story,” are not really about murder. “Instead, murder is a launching point to explore the issues that Gamache and others struggle with.”

In this case, the issue is eugenics coupled with mandatory euthanasia of the elderly or infirm.

“The Nazis used eugenics in ways that are so clearly wrong,” Penny says. “But what about our increasing tendency to abort fetuses that have identifiable disabilities, such as Down syndrome? What about the animals we raise for experimentation? And our elderly or frail relatives? During a time of illness, for example, should they be abandoned or forced to die while we save the young and healthy?”

Penny’s husband, Dr. Michael Whitehead, the model for Armand Gamache, was 82 in 2016 when he died peacefully at home, having lived for several years with dementia. In contrast, many seniors died of neglect and abandonment in Canadian care homes during the pandemic—so many that several provinces have launched investigations. “These are troubling issues that exist on a continuum,” Penny says. “We need to keep wrestling with our concerns about them.”

At the same time, Penny feels strongly that the pandemic helped us rediscover the importance of kindness.

“Ultimately, my books are about friendship and community,” she says. “Three Pines survives because of the love that exists there. Love in all its forms—between people, people and pets, villagers who support each other even when they disagree and who don’t sweep the past under the rug. Villagers who own their past while moving forward.”

The world of Three Pines is brought to listeners’ ears by the well-known British stage and television actor Robert Bathurst, who began performing the series in 2015 after the death of longtime narrator Ralph Cosham. Penny, whose friendship with Cosham was such that she accompanied him to the Audie Awards ceremony where he won top honors for The Beautiful Mystery, says about Bathurst, “It takes a special person to take on an established series. Robert is that special person. He has done wonderfully. I’m overjoyed for him and me and the readers, who I admire for persevering through the change. We’re so lucky! Everyone loves him.”

Penny, who dines with Bathurst whenever she is in London, is particularly delighted that he will join her for the final stop on her virtual book tour for THE MADNESS OF CROWDS.

“Robert’s just such a terrific fellow,” she says. “He will be interviewing me from England. It’ll be late his time, but he’s still game! People can ask questions of either of us, so I hope we have lots of audiobook listeners. It’s going to be so much fun.”

AudioFile editors have five audiobooks for listeners to enjoy this month. Whether you want to dive into Stephen King’s latest, a crime drama, or settle down to revisit Three Pines with Louise Penny, you’ll find a new audiobook to love. In the mood for historical mystery listening? Charles Todd’s latest takes listeners to Ireland with Bess Crawford, while Sujata Massey’s newest audiobook illuminates the rich historical period in which the courageous Perveen Mistry fights to assert herself. Want a listen that will keep you up all night? Check out Joe R. Lansdale’s Southern gothic audiobook for a chilling experience. 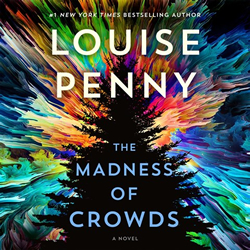 THE MADNESS OF CROWDS

Narrator Robert Bathurst returns listeners to the fictional Canadian village of Three Pines in the 17th addition to Louise Penny’s Chief Inspector Armand Gamache series. Bathurst masterfully voices Gamache and the many characters who inhabit this story, and his flawless pronunciation of French phrases contributes to creating the atmosphere of this tiny Quebec village, just coming out of the pandemic and celebrating the Christmas season. Gamache’s holiday is interrupted by the appearance of a visiting statistics professor whose thesis promotes genocide and threatens Gamache’s sense of justice and his family. A timely and provocative exploration of the thin line between kindness and cruelty. 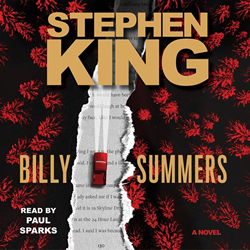 Stephen King built a career on horror, but his latest venture, which is crime drama, is scary good. Narrator Paul Sparks’s performance is so perfect it challenges the listener to stop listening. Sure—just TRY to turn it off! Billy Summers is a hitman with a conscience; he only goes after “bad men,” even though he has no compunction about being paid to kill. While Billy’s character is a tad far-fetched, it fits the definition of antihero. And because the story is told in the first person, listeners see the decent person inside the man with blood on his hands. 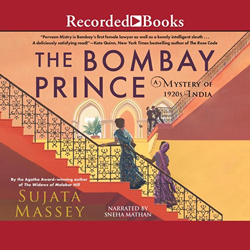 With her easy-to-listen-to voice subtly changing accents and intonation for the Indian and British characters, Sneha Mathan performs the third in the Perveen Mistry series. Mistry, the only female lawyer in India, seeks justice for a female Parsi student found dead on the day of Prince Edward VIII’s arrival in Bombay in November 1921. Massey paints detailed pictures of a city divided by religions and dominated by British rule. Listeners will find themselves engaged less for the mystery than for the well-written and well-performed invitation into Mistry’s complex world. 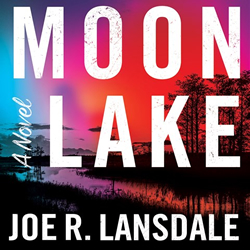 Brace yourself for this horrific Southern gothic narrated by Jason Culp in a rich Texas twang. Daniel Russell was 13 when his father drove them off a bridge into Moon Lake, but Daniel survived. Nearly 10 years later, a grisly discovery changes everything he knew about his hometown. Culp’s accent and characterization bring Daniel to life with an earnestness that both complements and contrasts with the heavy use of scatological similes in the darkly humorous writing. He expertly spins this yarn, giving appropriate weight to the themes of racism and greed, capped off with a gruesome conspiracy that will keep listeners up at night. 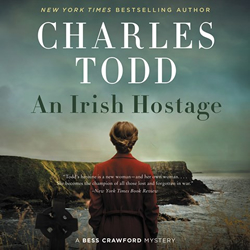 Rosalyn Landor returns to narrate the 12th installment in this series featuring Bess Crawford, former WWI nurse. When Bess is invited to Ireland to stand up at her friend’s wedding, she wades into political upheaval—and then the groom disappears under mysterious circumstances. With a crisp upper-crust English accent, Landor remains true to the indomitable Bess, who is sharp-witted, kindhearted, and determined. Landor employs a soft lilt for many of the locals in the bride’s village and creates skillful portrayals of colorful characters to deliver an entertaining whodunit.