A Military Tragedy, A Ruthless Plot, and Sharks—Lots of Sharks 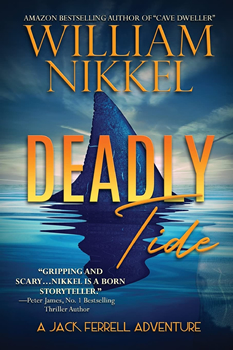 This page-turner finds Jack three and a half miles beneath the Philippine Sea in a research sub. His once-in-a-lifetime opportunity to explore the wreckage of the USS Indianapolis is cut short when he receives an order to return to his home base of Oahu to investigate unexplained shark attacks against tourists at Waikiki Beach.

Jack reunites with his friends Kazuko and Robert, along with Honolulu Police Detective Brian Tokunaga. As he comes closer to uncovering a deadly plot threatening not only Waikiki, but all the world’s most popular beaches, his brutal adversary will make sure Jack has no choice but to swim with the sharks. 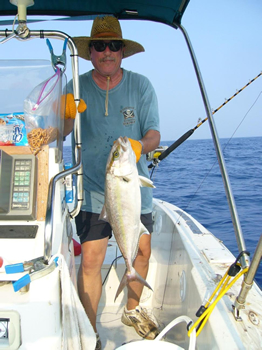 Nikkel fishes the waters near Maui.

To uncover the story behind the story, The Big Thrill caught up with Nikkel at home on Maui, where he lives and writes while on hiatus from his other home in California.

“Nothing gets the adrenaline flowing like the word shark,” he says. “The mere thought of being attacked by a great white brings chills to most people. That innate fear, coupled with the morbid fascination of who will be attacked next, and how Jack stops the killing, will keep readers flipping pages late into the night.”

Not to worry though; this story doesn’t mimic Jaws. “When people see a book about sharks and people dying, their first thought is Jaws,” Nikkel says. “The biggest challenge for me was to not write another Jaws. In my story, the sharks aren’t the bad guys. Quite the opposite. Though there are deadly shark attacks in the plot, I went out of my way to point out that they’re not the vicious aggressors most people believe them to be.”

The opening of the story is particularly poignant. During WWII, when the USS Indianapolis sank near the Philippines, 900 sailors were cast adrift in shark-infested waters. Only 300 survived.

“I’ve seen footage of the wreckage, and it truly is amazing,” Nikkel says. “When I sat down to write DEADLY TIDE, I knew I wanted to write a story around the tragedy that befell the crew of the USS Indianapolis. And since sharks figured heavily in that disaster, the story would have to include shark attacks. They had to be vicious and deadly, but I did not want them to be the villains.”

Instead, Nikkel crafted an even more vicious villain—Li Fang steals an invention and uses it to advance his nefarious objectives. What’s the invention? Something both fearsome and creative, but we can’t tell. You’ll have to read the book to find out. 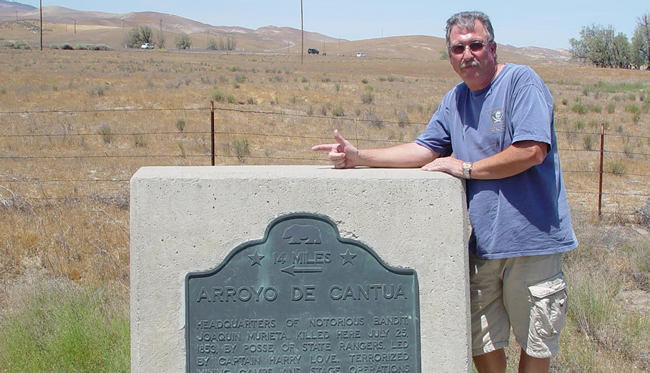 Nikkel visits the Joaquin Murieta monument in Coalinga, Calif. Known as “the Robin Hood of the West,” Murieta is thought to have inspired the character of Zorro.

Li Fang is only one of several characters that draw readers into this story. None are based on real people, Nikkel says, but the former homicide detective and SWAT officer for the Kern County Sheriff’s Department admits, “I think every writer draws inspiration from people he or she has met or interacted with in one way or another. In my career as a deputy sheriff, I met people both rich and poor and good and bad. The characters in my stories are not based on any specific person. To be fair to the wonderful people I had the pleasure of working with and those with whom I came in contact, my characters are based on a composite of real people with a dose of my imagination.”

Nikkel’s path to becoming an Amazon bestseller didn’t start with police work or writing, however. “I’ve always been an artist, from my childhood days through much of my adulthood. When I retired from police work, I continued my passion of being a wildlife artist. Though I had some success, I felt a need to express myself in another way. I’ve always been a dreamer. As such, my writing career was born.” 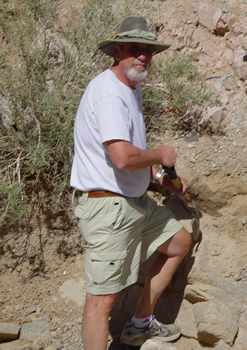 Exotic settings like Hawaii keep his stories fresh, Nikkel says. “But in spite of the islands’ beauty, even a tropical paradise can become stale over time with one story sounding like another. Legends and history also inform my books. In Cave Dweller, I took readers in search of a mythical race of little people in a subterranean world beneath the island of Kauai. Other stories have taken place in the goldfields of California and the Amazon jungle of South America. In DEADLY TIDE, I take the reader to the wreckage of the famous WWII cruiser USS Indianapolis lying three and a half miles beneath the surface of the Philippine Sea.”

Regardless of setting, it’s Nikkel’s characters that bring these stories to life.

“Through it all, Jack Ferrell has always been a champion for the underdog,” he says. “His core values haven’t changed, but he has evolved into a much stronger and more focused character since my first novel, Glimmer of Gold. What Jack has come to realize is it’s when he’s on the edge that he’s completely alive.”

Jack has also matured in his attitude toward women. 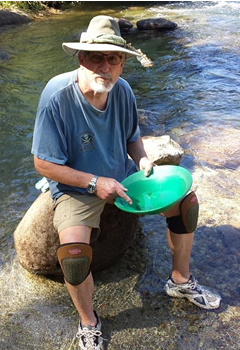 Nikkel pans for gold in the American River in California.

“In Hostile Waters, Jack admits he’s tired of superficial love affairs,” Nikkel says. “When he and Cherise acknowledge their love for each other, they also realize their lives take them in different directions. They arrive at an understanding they’ll meet whenever their schedules allow and spend time together absorbed in their ongoing love affair. In DEADLY TIDE, Jack and Cherise have settled into a routine of pre-arranged romantic trysts. During the course of the story, he eagerly awaits his upcoming rendezvous with her. When another woman, Kiana, comes on to him, he appreciates her good looks but rejects her, partly because of his love for Cherise, but primarily because he finds Kiana far too young and manipulative with a deceitful agenda.”

Nikkel’s ultimate goal is to entertain. “In the process of providing my readers with an escape from the day-to-day routine, they take away a heightened awareness of the horrors of war and the ultimate sacrifice so many young soldiers paid for our freedom.”

Nikkel’s first four novels were published by an indie publisher, but all 10 Jack Ferrell adventures, the Max Traver steampunk series, and a novella, Tibetan Gold, continue to thrive under the watchful eye of John and Shannon Raab at Suspense Publishing.

As much as Nikkel loves his current characters, his next adventure will feature a new main character, Mathew Dawson, and is set in the Carson Valley area, near Genoa, Nevada.

If Mathew is even half as fun as Jack, we predict another big success!