Things Get Personal for Lily Wong 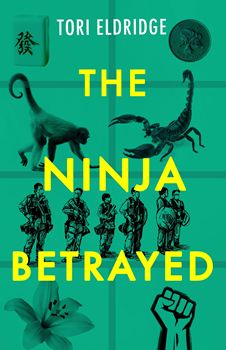 Lily Wong didn’t come quietly into the literary world. No, author Tori Eldridge’s Chinese-Norwegian modern-day ninja fought her way onto the scene in The Ninja’s Daughter, where she faced off against a Ukrainian mob, sex traffickers, and her own family to save two women and an innocent child.

But Wong’s family life has always skewed toward dysfunction, and in this third series installment—THE NINJA BETRAYED—Eldridge makes things very personal for her heroine when Wong’s mother is summoned back to Hong Kong to attend to family business. There they uncover shaky finances, questionable loans, and a city in political turmoil. Before long, it’s clear that Wong will need to rely on more than her ninja skills this time around.

In this interview with The Big Thrill, multi-talented author Tori Eldridge shares insight into the decisions that framed THE NINJA BETRAYED, how her own passion for martial arts fuels her character’s fight scenes, and why food has a habit of weaving its way into her narratives.

Your previous books in this series deal more with women and children who are in abusive situations. But in THE NINJA BETRAYED, things are personal for Lily—we get much more of a glimpse into her family life and their dynamics. What inspired this story, and how did you know it was time for Lily to “go home”? 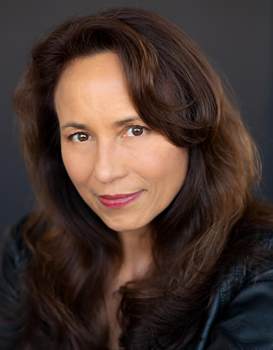 I had always intended to send Lily to her ancestral homeland, where her mother was born and her relatives still live; it was only a question of when. Since Ma works for her father’s international finance company, I knew the intrigue would center around the Wong family business. The basic premise for the book formed in my mind as one thought: Lily goes to Hong Kong to save family.

I laid the foundation for this adventure in The Ninja’s Daughter, where we see the control Lily’s Hongkonger grandfather exerts on her life in Los Angeles, and again in The Ninja’s Blade, where her grandparents come to visit. Although Lily loves them dearly, their meddlesome habits confound her almost as much as the mobsters, assassins, and sex traffickers she fights and the wayward teenagers and sometimes-difficult women she rescues.

I discovered the motivation for sending Lily and Ma to Hong Kong while writing a mahjong scene near the end of The Ninja’s Blade. Interwoven with the game, Lily challenges Gung-Gung about the pro-democracy struggle in Hong Kong while Ma shoots barbs about her father-boss’s lack of respect. The impetus for THE NINJA BETRAYED emerged from there.

You also give the reader a new perspective on the relationship between China and Hong Kong. Why was that important to bring into the plot for you?

Hong Kong is an important global city. What happens there impacts international business and our relationships with China. Their protests and struggles have also coincided with events here in the United States. All of this feels relevant to me as an American.

I also wanted Lily to see Hong Kong’s struggle through a variety of local viewpoints. Although Hongkongers may unite in their desire to maintain democratic freedoms, they often have different ideas about how to do this. Again…timely and resonant. 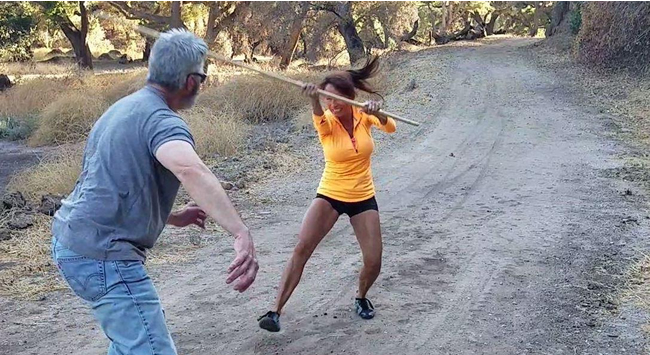 When Lily offers to look out for the teenage daughter of her grandfather’s driver, she throws herself into the path of protesters, rioters, and police. This deepens her perception of the situation and adds a considerable amount of action to my story. Although fictional, I’ve set all of my pro-democracy incidents into Hong Kong’s timeline and based them on or blended them into actual events.

I also have a personal interest in writing about Hong Kong because my daughter-in-law is a Hong Kong citizen. Never did I imagine that my modern-day ninja protagonist—created before my son even met his wife—would share the same maternal lineage as my granddaughter!

You and your main character, Lily Wong, share a passion for various martial arts—I’ve recently become somewhat obsessed with Muay Thai kickboxing, so I can somewhat relate. How has your experience with martial arts enhanced your ability to flesh out Lily’s character?

As with Lily, my martial arts training informs the way I walk in the world. This is especially true for Ninjutsu and To-Shin Do (the modern evolution of the ninja martial arts) that integrate combat techniques with strategies and concepts that help us win in all facets of life. I’ve also trained in Korean Tang Soo Do, Chinese Wushu, Brazilian Jujutsu, and American kickboxing. Every martial art I have encountered builds grit, determination, and the ability to flow and adapt.

I’ve given Lily a similar background with Ninjutsu, Wushu, and boxing. She also follows the Tendai Buddhist practices most associated with ninja and has a kamidana (god shelf) and Shinto shrine in her home dojo. Through her life and this book series, I offer readers a peek into modern-day ninja practices and training.

Eldridge in Hong Kong, where THE NINJA BETRAYED is set

In this third installment of your Lily Wong series—THE NINJA BETRAYED—what was Lily’s most significant moment of growth? Did she do anything to surprise you in this book?

I knew going in that Lily and Ma would learn secrets about each other they had buried after the rape and murder of Lily’s sister, but I didn’t expect to be sobbing ugly tears as I wrote. Lily makes discoveries that hit her (and me!) very hard. Her relationship with Ma changes forever by what happens in that scene.

Emotions run deep, not only between Lily and her mother but between Lily and the man she’s only just begun to date in Los Angeles. With Daniel Kwok in Hong Kong for business, she has time and opportunity to find out how she really feels and to confront the emotional baggage she’s been carrying for years.

Speaking of Daniel Kwok, you continue to tease us with an evolving relationship between Lily and Daniel. Can you share anything about what kind of future you envision for them?

Hmm…tough question. Daniel is a charming and persistent suitor who values Lily in all of her complexity. He balances the darker qualities of her personality and plies her with amazing food and romantic dates. If I were younger and not already married, I might fall for him myself!

Lily is more complicated. She has a tangled view of romantic love that’s mixed with tragedy and guilt. The pressure from her family doesn’t help. It’s hard to know what she wants, feels, or believes she deserves. And did I mention that she hasn’t dated in seven years? Lily is too consumed by the exciting, excruciating, stressful romance of the present for me to predict her future. It’s so much easier for her to fight than date. 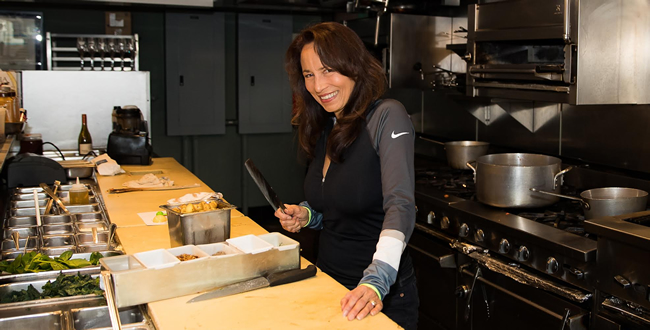 Eldridge with a cleaver in her niece’s restaurant—What could go wrong?

This series is always good for fight scenes, romance, and food. I know you have a martial arts background, so that explains the authenticity of the fight scenes, but how does food weave its way into the narrative? Are you also a secret chef?

Absolutely! I went through a crazy gourmet cooking stage back in the ’80s and ’90s, when our kids were young. Bouillabaisse from scratch? Homemade breads and pasta? Cakes iced to resemble paintings? Nothing was too difficult or time-consuming for me back then. I even prepared a full dinner buffet with seven intricate desserts for 200 guests. Crazy, right? I slowed down when I became obsessed with the martial arts. Now with my busy author’s life, I keep things simple except for special occasions.

My specialty is a crispy Mandarin duck. You can find the recipe here or with other recipes on my website readers page.

Since I was raised in Hawaii, my general cooking style is Asian with a heavy emphasis on fresh garlic, ginger, and vegetables. I love to eat almost as much as my protagonist, but my Chinese-Hawaiian mother never taught me to cook. She always said, “If you love to eat, you’ll learn to cook.” I guess she was right! 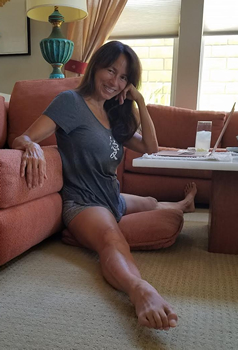 You are incredibly involved in ITW’s debut program. Why is it important to you to provide support for debut authors?

I found my tribe with ITW when I attended my first ThrillerFest in 2013. I met some of my dearest author friends during that event and forged relationships that have guided my writing and helped me on my publishing journey. When K. J. Howe asked me to come aboard as the Debut Authors Program coordinator, I couldn’t refuse. After everything ITW has given to me, I was eager to welcome new authors into the fold.

And what a terrific team! It’s been an absolute joy to work with Lisa Gardner (V. P. author services), Jenny Milchman (co-chair debut authors), and Elena Hartwell (Facebook group manager). We’ve put together, and are continuing to brainstorm, new and exciting opportunities for our debuts—new and old—to bond, grow, and succeed.

I’m about to reveal the gorgeous cover for my standalone novel, Dance Among the Flames. It’s a dark magical realism tale about a desperate mother who rises from the slums of Brazil to become a powerful wielder of Quimbanda magic. Across 40 years, three continents, and a past incident in 1560 France, Serafina Olegario tests the boundaries of love, power, and corruption as she fights to escape her life of poverty and abuse.

F. Paul Wilson calls it “stunningly original,” and Jonathan Maberry says it “mixes mysticism and horror with seduction and vengeance to conjure real magic.” I can’t wait to share it with the world. Dance Among the Flames releases May 24, 2022—just in time for ThrillerFest XVII!