Peering into the Future 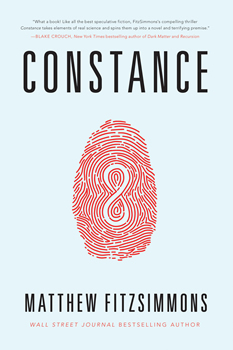 For many years, Matthew FitzSimmons—who has just published his sixth novel, CONSTANCE—was a writer who didn’t write.

“I had spent about three or four years in my twenties writing the great American novel, waiting tables, doing all of that sort of business,” he says. But it didn’t lead him to the career he hoped for or wanted. “I like to joke that when I got [the book] done, I realized it was neither great nor particularly American. And I was done with writing. I was burned out at that point.”

When FitzSimmons peered into the future, he couldn’t see any promise for himself as a writer.

“My college friends were finishing grad school and buying houses and getting married, and I was a waiter,” he says, recalling a sense of stuckness and disappointment. “I think when you sort of go for it in the arts and you don’t make it, there’s a feeling of—you’re 28, so you’re melodramatic. You have these thoughts, like, okay, I’ve ruined my life.”

FitzSimmons walked away from writing for a decade. Then he started dabbling with fiction again. Just for himself. Because he wanted to.

“I was having a bad time personally, and I had sort of crept back to writing and I was writing short things, but it was a secret,” he says. “I told nobody because I was almost embarrassed to be writing again. Like they were just gonna be like, why would you do that to yourself again?”

During this period, “I just needed a project,” he says. And that’s when he launched into a new novel. The Short Drop is about an expert hacker and Marine named Gibson Vaughn who investigates the disappearance of a politician’s daughter. At the time, FitzSimmons was teaching English and theater at a private high school not far from where he’d grown up in Washington, DC.  “I wrote The Short Drop in the summers and on the weekends,” he says. “I was working full-time, but the nice thing about teaching is you get the summers off. I took two and a half years, and then I sold it and my agent did a good job. So I was able to quit my day job.”

Virtually overnight, FitzSimmons had a new gig, the one he’d always dreamed of. Still, he quickly discovered that there’s “a difference between writing for yourself and writing professionally. I went from, well, I can be done whenever I want, because no one knows I’m doing it to okay, we want that book in 11 months. And now you’re doing it full-time. So it was a total change in my process.”

That process has evolved a lot over the course of five more novels. But there’s one thing that’s stuck almost from the beginning of his career as a professional writer—one particular idea. He was in the middle of writing his second Gibson Vaughn novel, Poisonfeather, when inspiration struck.

“It was one of those, ‘Ooh, that’s a cool idea’ moments,” he says. “And I spent a night world-building and writing notes, and I wrote a chapter. And then I basically put it in a drawer.”

At the time, FitzSimmons was under contract to write more Gibson Vaughn novels “and was committed to that arc. But it was like, I want to do this.” He shelved the idea for a few years, but it never really went away. “I finished the fifth Gibson Vaughn book, and I was like, okay, this is a good stopping place. I pitched it to my agent. I’d written about 100 pages of it by that point. And I was like, do you think this is a bad career move? Is this going to help or hurt me?”

FitzSimmons and his agent decided that it made sense for him to break some new ground, and that’s how CONSTANCE came to life.

The novel is about a young woman named Constance “Con” D’Arcy, a Washington, DC, musician haunted by her past and actively avoiding her future. The year is 2040, a world that in many ways is like our own, except for one huge difference—human cloning has become a reality.  For those who can afford it, death is no longer permanent. Thanks to a company called Paligenesis, if you die, your consciousness can be transplanted into a new, identical body.  Generally, it’s a perk reserved for the rich, but Con’s aunt Abigail is a cloning pioneer who’s gifted her niece with a clone of her own.

Not that Con thinks about this all that much, until the day she wakes and realizes she is not herself anymore—she has died and come back to life in her clone. Disoriented and scared, she tries to make sense of her new situation. But things only get worse when Con realizes that 18 months have passed. Her “original” is dead, and she has no idea what happened to her, or even who she is anymore.

CONSTANCE is both a classic noir tale and a probing piece of speculative fiction.  FitzSimmons did extensive research into subjects detailed in the novel and came away realizing that the world he wanted to portray is not so far from our own. “We do human cloning in this country every day; it’s called stem cell research,” he says. “What we don’t do is make a person. It’s almost like a gentleman’s agreement, that that is the line that shall not be crossed. But the technology exists now too. Like you could clone a person today, if you wanted to.”

While creating the world of this novel, FitzSimmons had so much fun, he’s decided to go back for a follow-up. “It takes place in California two years later,” he says. “I was like, I want to look at this from another point of view. I don’t know whether it’s going to work. I don’t know whether anyone is going to be interested in reading a book in this world that’s not with Constance as a main character, so we’ll see how that goes.”

There’s only one thing for sure: Now that FitzSimmons has gotten the writing career he always wanted, he’ll just keep on going…wherever that leads him.