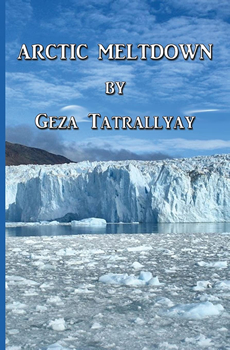 The Arctic is abundant in oil, gas, and minerals. The seabed resources of the region have enormous economic potential but are expensive to obtain. As the polar ice cap melts and maritime sea routes open, the region becomes easier to take advantage of. The ecological ramifications of climate warming and the exploitation of natural resources won’t stop countries from claiming territory in which to control the Arctic and its riches. This is the setting of Geza Tatrallyay’s new thriller, ARCTIC MELTDOWN.

Six countries want control: Greenland, which is the world’s largest island with less than 60,000 residents, Denmark, Canada, the United States, Russia, and China. They jostle for jurisdiction and use every scientific, political, and military tool at their disposal to do so.

At the United Nations, each interested country must submit their plan for the Arctic. It’s a tense process. Hanne Kristensen, a Danish geologist, teams up with a veteran Canadian diplomat to contend with a corrupted UN process. At stake is the preservation of the environment while extracting the minerals. And money, of course. Having control is power, and each party wants to benefit. At the UN and elsewhere, there are gatherings, dinners, diplomacy.

All the while, backroom deals, flat-out lies, violence, payoffs, and military action take place. It is a multinational dance with high stakes for each country, while attempts are made to shut the others out. Add a group of aggressive environmentalists to the mix, and the action gets explosive. And at stake is the health of an important region of the planet.

In this The Big Thrill interview, Tatrallyay takes time out of his schedule to share insight into his fantastic fact-based thriller.

The novel is chock-full of enlightening scientific matter.

Yes, it is dense. For all my fiction, I do a lot of research, so there is always learning as well as excitement/action/titillation in it for the reader. The five thrillers I have written to date are all based on well-researched history or actual current events and are a take-off on a possible course that history might take or has taken. Hence the need for factual grounding. The biggest opportunity is to get readers to grasp the important reality of what is happening in the Arctic environmentally, politically, and militarily. 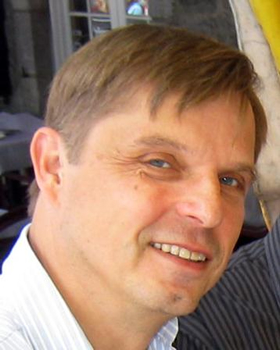 That explains the endnotes. Handy, too, for further exploration on the topic, as your research is broad. Let’s talk characters.

The heroine is Hanne Kristensen from Denmark, which has a huge stake in the Arctic. I needed her to be a geologist or scientist to be able to delve into the science of climate change, but one working in the government so she could be involved in the relevant machinations at the center of the book.

Richard Simpson is a Canadian diplomat working on Arctic affairs. An Australian, Lock McTierney is a complex character and a brilliant professor. A duo of Danish men, Jens Andersen and Erik Olafsen, are members of the Green Liberation Front (think Greenpeace). And then there are the Russians: Pavel Laptov is a well-respected polar explorer and politician. Andrei Gusanov (a fictional Putin-like figure) is president and a ruthless politician. Ron Hall is a sympathetic and smart American government official. Malik Rorsen is an Inuit who becomes president of a newly independent Greenland. And lastly, the Chinese are represented by Zheng Li.

They have their own interests on behalf of the country they represent, and the diplomacy—or lack of—is fascinating. Tell us about your writing journey.

I’ve been writing since high school. First, I dabbled in poetry, which I still love to write. Next, I turned to writing the story of my family’s escape from Stalinist Hungary when I was seven. It became the basis of my first memoir, For the Children.

I wrote my first thriller, Twisted Reasons, while living in Vienna. It was here when I started writing ARCTIC MELTDOWN. I became more and more concerned with what I saw up north both in terms of climate change and the less publicized militarization of the Arctic, especially by the Russians. I thought a thriller focusing on these elements would be a good way to bring attention to them.

Tell us about your writing routine.

I write when I can. Once I find the time and have my laptop in front of me, it pours out rapidly. I can write anywhere. On the porch, in the living room, in the study. I just don’t want distractions. I develop an outline but allow the story to shape itself and the characters to develop it. The end result is usually quite different from the original.

Who are your literary inspirations?

I have many authors who have inspired me. Mainly poets and thriller writers. Graham Greene started me off in the thriller genre. John le Carré, of course. Ken Follett, Umberto Eco, Stieg Larsson. And I love the Bernie Gunther novels of Philip Kerr. These authors influenced me in shaping characters and plot, the need for action, and surprise twists.

Do you have a day job? If so, how does it influence your writing?

I no longer work. I have been writing all my life but focused on getting things published since retiring. It is fun and inspiring, and I delight in the fact that there is no difficulty in having works picked up by publishers.

My previous work life has influenced my writing through the different cities in the world it took me to. It was wonderful and inspiring to be exposed to so many different cultures, languages, ways of life. I started a couple of my thrillers while living in Vienna and continued after moving to Montevideo and thence to Bordeaux, France.

Would you share one of your poems with us?

Satanic wolves cavort on my mother,

gnaw at her flesh, drink of her blood,

the witches’ cauldron of human waste,

the debris of a warmed-up world,

empties on her ailing corpus.

Can we still save our mother earth,

or will she perish with mankind?

Born in Budapest, Geza Tatrallyay escaped with his family from Communist Hungary in 1956 during the Revolution, immigrating to Canada. After attending the University of Toronto Schools and serving as school captain in his last year, he graduated with a B.A. in Human Ecology from Harvard College in 1972, and, as a Rhodes Scholar from Ontario, obtained a B.A./M.A. in Human Sciences from Oxford University in 1974. He completed his studies with a M.Sc. from London School of Economics and Politics in 1975. Geza worked as a host in the Ontario Pavilion at Expo 70 in Osaka, Japan, and represented Canada in epée fencing at the Montreal Olympics in 1976. His professional experience has included stints in government, international finance, and environmental entrepreneurship. Geza is a citizen of Canada and Hungary, and as a green card holder, currently divides his time between Barnard, Vermont and San Francisco. He is married to Marcia. Their daughter, Alexandra, lives in San Francisco with her husband David and two sons, Sebastian and Orlando, while their son, Nicholas, lives in Nairobi with his Hungarian wife, Fanni, and his granddaughters, Sophia and Lara. Geza is also the author of five novels, three memoirs, four poetry collections, and a children’s picture storybook. His poems, stories, essays, and articles have been published in journals in Canada and the USA.