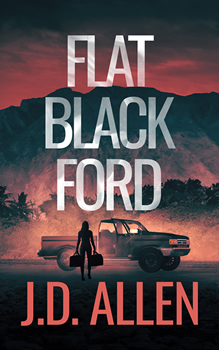 As FLAT BLACK FORD opens, Detective Jim Bean has been hired to find Stella DeSoto. That shouldn’t be hard; she’s been on the evening news—in the titular vehicle—during her current cross-country crime spree.

As a teen, Stella was the victim of a hit and run that left her scarred. Since then, she’s experienced the worst of people and now she’s had it with Vegas and the mean people who surround her. She has a plan to escape, and there’s a sailboat in the Florida Keys calling Stella’s name. All she needs is a bit more cash to buy it.

Author J.D. Allen has written FLAT BLACK FORD through both the lens of the pursuer, Jim Bean, and the pursued, Stella DeSoto. What was behind that choice?

“The decision to use dual POVs and give the reader a look into the head of the antagonist came accidently as I made my way through 19 Souls, the first book in the series,” Allen says. “It wasn’t far into the first draft that I felt it would be a far more compelling story if the reader understood the female killer’s motives. It made it richer than letting a stereotype be the story. The reader understands her motives and desires. I’ve followed through with that style.

“It’s fun to follow both paths,” she adds. “Good and bad, honorable and evil, through the journey. I’m careful to balance each part of the story, but the best thing is knowing at some point, I have created empathy for the villain. The reader might find themselves understanding, if not momentarily rooting for, both sides.”

One of the main themes of the book is how people deal with emotional and physical damage—our internal and external scars. Why does this theme appeal to Allen as a writer (and a regular person)?

“All my books are about that very thing,” she says. “Scars are a side effect of living. We all have them. Loss. Pain. Regret. How one deals with those scars makes great motivation for characters. Villainous or heroic. Emotionally charged motivations get the criminal caught, right? I also like to look at motivation; not all crimes are committed for the sake of evil. Though even with the purest motivations, crimes are still crimes. It’s interesting to explore what it is that pushes someone from victim/injured party to criminal.

“In FLAT BLACK FORD Stella is dealing with some serious scars from a sexual assault. I know that surviving such a thing leaves serious invisible scars. As a survivor of this kind of crime myself, Stella’s story was important for me to tell. Old scars are still capable of creating great pain. Stella finally decided she’d had enough and came up with a plan. One that many a survivor has imagined. One that many have felt is the only recourse.”

We asked Allen how aware she was of writing what can be described as a cross-country chase book during the restrictions that COVID-19 put on the country.

“I did start this one during the lockdown,” she says. “My mom lives with me, and we’re both immunosuppressed. Which means we had to be super careful and stayed home for a long time. I don’t think I left the house except for a walk on the beach or a doctor’s appointment for months. It shows in this book. I needed this one to be little lighter…if you can really say this is light! For the Sin City series, it is. No deadly female serial killer as in 19 Souls, no human traffickers as in Skin Game.

“It was a long year,” she adds, “and I’m sure, looking back, this book will stand out as a little different. That’s okay with me. It was a fun write.”

Stella is emotionally attached to the automobile which gave the book its title.

“Like Stella works on cars with the male father figure in her story,” Allen says, “Dad and I worked on his old El Camino. On one trip to the hobby shop on the Air Force base in Ft. Worth, I got to drive a ’66 Mustang around the neighborhood. Man. I thought I was the bomb. Barely thirteen, with the top down and the engine growling. I couldn’t stop talking about it. That grew into the idea that Dad and I would find a fixer-upper and build it together. Sadly, Dad got cancer, and we never got that chance. Stella getting her ride and loving that truck so much was a touch of nostalgia for me. And a nod to Dad.”

Allen has been very open about her challenges with dyslexia. I asked her to share how it has impacted her writing journey.

“We call it neurodiversity,” she says. “Dyslexics and others with different pathways of thinking/learning. I’d say I’m moderately dyslexic and I also have aphantasia, the inability to see images in my head. No photographic memory here.

“Growing up, I didn’t even know I was dyslexic. I did poorly in grade school, and the adults would blame it on the fact my elementary school chose not to teach phonics for a couple of years. The education system not understanding dyslexia was a life sentence for kids with learning differences back then. We were labeled slow, or my favorite: ‘Jules doesn’t apply herself.’

“I fumbled through high school and managed to graduate. I flunked out of college the first time out. That made me mad. I worked harder and got through a series of community college courses that enabled me to get into a university. I was determined to get a degree. In hindsight, I’m not sure what motivated me, but I assume it was my dad hoping I’d be the first in my family to do so.

“Eventually, I was able to transfer to Ohio State University. A teaching assistant in an anthropology class recognized my dyslexia in a short, handwritten essay [I had written]. He suggested I get tested. I was 26 years old and everything changed in my world. With some help and lots of work, I finally didn’t consider myself dumb or slow. I had thrived in drama classes in high school. And there, I’d fallen in love with storytelling. I wanted to write those stories. But until OSU, I never considered it a possibility. I started with creative writing classes. And I persisted.

“As a result, I’m not as well-read as many other authors. I came to love reading very late. I accept that. I’m privileged to have access to technical innovations that help me do this thing I love. I use Grammarly, spellcheck (though I have a love/hate with that one), and a special Dyslexie font that makes it easier for me to read and revise.

“Professionally, I pay for a line edit before turning in a manuscript. I can’t expect my publishers, agent, or editors to do extra work because my drafts can be challenging at first pass. If I’d had to type out my manuscripts on an old manual typewriter, I’d have quit before I ever got started. Yeah. I failed typing class too.

“I decided not to hide my dyslexia,” Allen says with pride, “because I want others, especially young people with neurodiversity to know they can be whatever they want.”

Finally, if Allen could put together her dream panel for ThrillerFest—participants need not be alive to join—who would be on it?

“Wow,” she says. “That’s a hard one. I’ve been to ThrillerFest several times. I’ve seen some tremendous panels and interviews. My favorites have been with authors who really know and like one another. Because our community is close and welcoming, that happens a lot. I love to show up to a panel with authors who I don’t know much about and find new favorites. If I had to pick, I’d have to say a conversation with Edgar Allan Poe, Mary Shelley, and Stephen King might be memorable.”

Hard to argue with that.

J.D. Allen earned a degree in physical anthropology and a creative writing minor from The Ohio State University. Her mystery books include the Sin City Investigation Series: 19 Souls, Skin Game (nominated for the Best PI novel of the Year from the PI Writers of American), Body Zoo, and the upcoming FLAT BLACK FORD. She has short stories in numerous anthologies. She’s a past chair of the Bouchercon Convention National Board, VP of Florida Mystery Writers of America, and past VP and then president of the Triangle Chapter of Sisters in Crime. Her work has won the Freddie Award and has been nominated for a Shamus, the Claymore, and the Royal Palm.