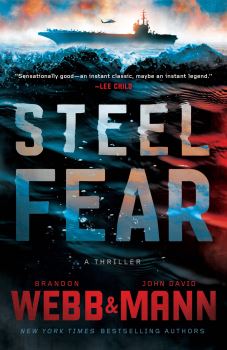 The moment Navy SEAL sniper Finn sets foot on the USS Abraham Lincoln to hitch a ride home from the Persian Gulf, it’s clear something is deeply wrong. Leadership is weak. Morale is low. And when crew members start disappearing one by one, what at first seems like a random string of suicides soon reveals something far more sinister: There’s a serial killer on board. Suspicion falls on Finn, the newcomer to the ship. After all, he’s being sent home in disgrace, recalled from the field under the dark cloud of a mission gone horribly wrong. He’s also a lone wolf, haunted by gaps in his memory and the elusive sense that something he missed may have contributed to civilian deaths on his last assignment. Finding the killer offers a chance at redemption . . . if he can stay alive long enough to prove it isn’t him.

First, that leadership matters. The only reason the horrifically malfeasant actions of the killer in STEEL FEAR can flourish the way they do is because of the abysmal onboard culture, which stems from the actions (and inactions) of the captain. So there are really two villains here: the actual murderer and the fragile-egoed, small-minded captain whose failed leadership creates a context for evil to take root.

First, the extraordinary quality of writing I’ve found in my crime-fiction heroes! There’s something about a life-or-death context (and especially of the murder-or-survival kind) that seems to etch human character into bold relief. Start dealing with murder, and you’re plunged into the heart of what makes us human.

Having the whole thing contained on an aircraft carrier was an enormous challenge. First, the challenge of conveying to the reader the enormity and complexity of the place. And even more, US naval culture tends to be a very buttoned-up, disciplined thing. No booze. No fraternizing. (Both of those in theory, anyway.) You don’t have bar fights, your hero facing off against a gang in the streets, or other opportunities for violence. So it’s a slooooow build. The other big challenge was stretching out the story to a full month (to allow for passage from the Persian Gulf to Hawaii) without the story dragging. It was a master class in pacing—the “master” here being the demands of the readership.

Yes: the nearly limitless need to revise and rewrite. I’ve written a lot of books, but all nonfiction—and I’ve never come close to the amount of revision, tightening, revising, and compressing as this. First draft: 153,000 words. Final: 103,000. And with each cut, each compression, each painful choice, the narrative line got better.

One is the broad public concept of “Navy SEAL.” These guys are physically strong, yes, but they’re not an army of Schwarzeneggers. What distinguishes a SEAL is #1 a state of mind: mental resourcefulness, ability to focus, intellectual curiosity. And while a SEAL sniper is of course a skilled sharpshooter, he is first and foremost an intelligence asset. Finn is a unique character, for sure… But as a sort of anti-SEAL, he’s more SEAL-like than some might assume.

Two things. First is that it is really a leadership parable disguised as a crime novel. Leadership great and terrible, and the consequences that flow from both, is a topic that has always fascinated both of us. And second, while the main storyline is of course fictional, an enormous amount of detail is borrowed in whole or part from real-life characters, situations, and events. (Some we can say, some we can’t!)

Oft-cited giants—Raymond Chandler, John D. MacDonald, Dennis Lehane, Bob Crais, Lee Child—were who got me intrigued. They showed me the phenomenal range and breadth of what was possible. But the biggest two influences have been Tana French and Kate Atkinson, both for the nuance and gorgeousness of their prose and the depth of humanity they paint. I think Atkinson is the most poignantly *human* author I know.

Q: How does your background in music figure into your writing?

A: I started out as a concert cellist and classical composer. Music is my native tongue; I’m always thinking in musical terms. The biggest challenges in making STEEL FEAR work were questions of pacing, contrast, the relationship of interior reflection and external events, and the long-range revelation of answers to myriad questions—for me all these are musical questions.

I coauthored this with a former Navy SEAL sniper, Brandon Webb; we have worked on a handful of nonfiction projects before. Honestly, I cannot think of a single challenge; we work together like <Forrest Gump voice> peas ‘n’ carrots. We also bring completely different skill sets and backgrounds to the table; it’s a good division of labor.