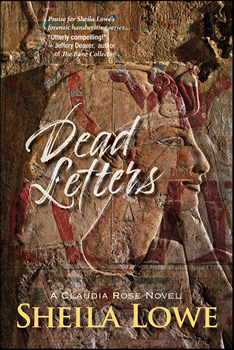 A heart-pounding hunt begins when Claudia Rose’s young niece, Monica, goes missing with an archaeologist whose shady past spills into the present. The frantic search takes Claudia to Egypt, Gibraltar, and the UK, where her skills as a forensic handwriting expert of international renown are needed to help foil a deadly terrorist plot—if only she can find Monica before she becomes a casualty.

DEAD LETTERS is Claudia Rose’s eighth venture into the world of mystery and intrigue. Author Sheila Lowe keeps the thrills coming—but found time to answer a few questions for The Big Thrill.

Claudia Rose has had eight adventures so far. What’s in store for her?

Claudia is going to wait for a while. My next book, The Last Door, will be in my Beyond the Veil supernatural suspense series. She plays a secondary role to her friend Jessica, who talks to “dead” people. In The Last Door, Jessica and her sister find out why they were adopted at birth. I don’t know much about it yet, but now that DEAD LETTERS is out in the world, I need to figure out what happens.

Like Claudia, you are an expert handwriting analyst. When was your interest piqued by this profession and how did you go about pursuing it?

I started studying handwriting analysis in high school in 1967 when my then-boyfriend’s mother analyzed my handwriting and shocked me with her accuracy in describing my personality. For the next 10 years, I read everything I could find, haunting the Anaheim (yes, where the original Disneyland is located) Library and bookstores. Eventually, I found information about a distance-learning course in the back of one of the books and signed up. Five years later I became certified.

Fast forward to 1985: I received a call from an attorney who wanted me to testify in a forgery case. When I told him I was trained only in personality assessment, he asked, “Do you know handwriting?” I’d been studying it for nearly 20 years, but his next words bowled me over: “I’ll get you qualified. We’re going to court tomorrow.”

Following a nerve-wracking day on the witness stand, I got some specialized training in handwriting authentication. These days I do far more identifying forgeries than I do personality assessment.

Then, after 40 years in the field, I was ready to kill someone. So, not wanting to go to prison, I did it on paper. That was more than 20 years ago.

Egyptology is such a fascination for many people. What was your initial interest and how did that develop into DEAD LETTERS? 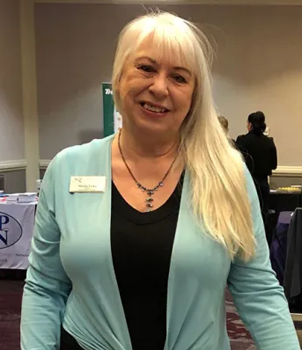 I’ve been fascinated by Ancient Egypt since I was about six years old; maybe because my same-age cousins lived in Cairo at that time and brought home a fez when they came to visit. I seem to remember having a book about Egypt, but maybe I’m making that up (I definitely had a book about dinosaurs. Sorry, I digress). Bottom line, I read numerous books about Egypt and as a teen, practiced writing hieroglyphics—a long lost art for me now. I’ve had psychics tell me I was a scribe, which I guess makes sense, considering my career in handwriting.

Two years ago, I went to Europe for the birth of my one and only grandchild (my younger son and his wife live in Germany). I also went to England, my original home, to meet some cousins I had corresponded with through Ancestry.com. They were wonderful. Some of us went to Gibraltar, where our great-great-grandmother was born in 1843.

With all this travel, I needed a story so I could write off some of the trip. Although I’ve never been to Egypt, I’ve always wanted to write about it and decided to add it to the story. So I interviewed my son—who, as a rockstar in Europe, has performed all over the world—and some friends who have lived there or visited. Luckily, they say I got it right in the book. I also watched a bunch of YouTube videos of people touring Luxor and Cairo. Uncle Google and Auntie YouTube know everything. I hope my readers enjoy reading DEAD LETTERS as much as I loved writing it—and that they cry in the places where I cried.

Monica’s arc was heartbreaking. Can we expect to see more of her in the future?

Monica was introduced as a 14-year-old in Written in Blood, which was her friend Annabelle’s story. Later, she had a small part in Inkslingers Ball, which is partly told from Annabelle’s point of view. In DEAD LETTERS, Monica decided she needed to come to the forefront, and I wouldn’t be surprised if her story continued in the future.

I aspire to write “real human” dialogue like John Sandford, character descriptions like Tami Hoag, and all the rest of it like Tess Gerritsen, Robert Crais, and Patricia Cornwell—before she changed her characters into unrecognizable superheroes and supervillains.

When I attempt to read a book critically but find that I’ve forgotten to be critical because the story has sucked me in, that’s when I know it’s a good book. Then I go back and figure out where the point was that I lost track, and why.

This book is about the search for Monica, a missing 18-year-old young woman, my main protagonist’s niece. A series character, she has been lurking in the background until now. In DEAD LETTERS, Monica is front and center. Starting as a girl who has lived a fairly sheltered life, her arc takes her to some agonizing places, emotionally and physically. So rather than thinking of her as a just a babyish teenager, discovering who Monica really is at her core, was a wonderful surprise.

I hope readers will see the path to redemption for one of the characters, whose weakness hides a moral strength that was hidden under a self-centered exterior.

Sheila Lowe writes stories of psychological suspense that put ordinary people into extraordinary circumstances. Like her fictional character Claudia Rose in the award-winning Forensic Handwriting series, Sheila is a real-life forensic handwriting examiner who is recognized as an expert in the court system. She also writes the Beyond the Veil paranormal suspense series and nonfiction books about handwriting and personality.