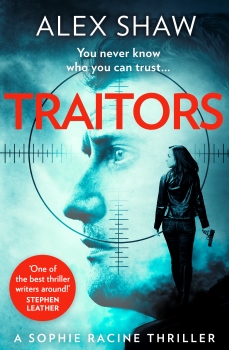 French Intelligence officer Sophie Racine is tasked with traveling into the heart of a warzone in Ukraine. Her mission is to assassinate Sasha Vasilev, a Russian mole who took the French secret service apart piece by piece and gave their secrets to the Kremlin.

Ex-SAS trooper and MI6 Officer Aidan Snow is also in Ukraine. Sent by British Intelligence, he must extract an innocent citizen caught up in the conflict in rebel-controlled Donetsk.

When their missions collide, Snow and Racine find themselves outgunned and outnumbered. Even if they make it out of the warzone alive, danger won’t be far behind…

This is the first time I have written a thriller with a female protagonist, and that made me write in a much more open manner. Originally I had wanted to create a closed and almost inhuman character, but the story dictated I go deeper, and I am so glad that I did.

Whilst writing this thriller, I was surprised by how much more inner emotion I was to get on the page by uniting my new female lead with my existing male hero from other novels.

I wanted to create a strong female lead who also had the attributes of Jason Bourne or James Bond, and hopefully I have managed to do just that.

Alex Shaw spent the second half of the 1990s in Kyiv, Ukraine running his own business consultancy before being head-hunted for a division of Siemens. The next few years saw him doing business for the company across the former USSR, the Middle East, and Africa.