Trading One Pandemic for Another 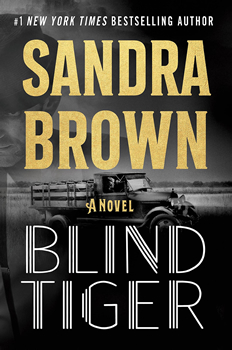 International bestselling author Sandra Brown knew only one thing when she sat down to write her 2021 thriller—she did not, under any circumstances, want to deal with COVID-19.

She isn’t alone. Not only has the pandemic thwarted many a writer’s productivity, it’s created a bit of a conundrum for contemporary authors—to acknowledge 2020, warts and all, or ignore it completely?

Brown chose “ignore”—and took it one step further. She decided to go back to a time long before COVID-19 was on anyone’s radar—all the way back to the Prohibition-era. The year is 1920 when Thatcher Hutton, a war-weary soldier, jumps from a moving freight train and lands in Foley, Texas, the state’s Moonshine Capital. As luck would have it—or perhaps “unluck”—a local woman goes missing on the same day. Being the new guy in town, Thatcher is Suspect Number One in her abduction.

Meanwhile, Laurel Plummer is hoping for a fresh start when she dives into the regional moonshine industry—and the good ol’ boys aren’t happy about it. As violence erupts, Laurel and Thatcher—now a deputy—find themselves on opposite sides of a savage moonshine war.

In this interview with The Big Thrill, Brown shares insight into the inspiration for her 87th (!) novel, the research that got her fired up to write Thatcher and Laurel’s story, and how in some ways, she inadvertently traded one pandemic for another.

When we spoke last year, you admitted that part of the reason you wanted to write a historical was to avoid dealing with COVID in your writing—but BLIND TIGER is so great (and thick!), it feels like this was meant to be all along. What was the inspiration for this story?

I always feel like the story is there somewhere and it’s just up to me to excavate it, rather than create it. I start with what interests me. I started looking at what was going on 100 years ago, and I started googling the 1920s. Then I googled “Prohibition in Texas,” and my eyes really got to bugging. Usually if I’m excited and I think an idea is fun, that’s where it starts. And in this case, I was looking for fun. Everyone, including me, was just so sick of everything going on. While doing research, I found this book—The Glenrose Moonshine Raid—and I learned that Glenrose was the Moonshine Capital of Texas. I have lived 50 miles from Glenrose my entire life. I ordered the book and read it one afternoon. So that’s what I built the book around. The town of Foley is similar to what Glenrose would have been like. Through other research, I learned about the Spanish Flu global pandemic and how soldiers were coming home from the unpopular WWI with PTSD, which hadn’t been named yet. And there was a huge women’s movement that resulted in the vote. There were a lot of societal issues that are parallel to what is happening today that will certainly be relatable.

In a way, I guess you kind of exchanged one pandemic for another.

Yes, but thing is, I didn’t dwell on that in the book. One thing I found out is that there was an encampment west of Fort Worth called Camp Buoy where hundreds of acres of soldiers were housed. Thousands of them got sick and died before they ever got sent to war. I don’t know if we’ve learned anything from COVID-19, but when you put that many people together in close quarters, it’s almost inevitable that people will get sick.

BLIND TIGER is steeped in fascinating historical fact. As a mostly contemporary author, how did you prepare yourself to slip back to 1920?

I had to stop writing and look things up all the time. There were certain things you couldn’t say back then because they weren’t invented yet. Airplanes were brand new. Appliances too. I had to look up who would have had electricity, for instance. The city folks had it for about a decade before people out in the country got it. Town folk had indoor plumbing. I had to look up the railway line to figure out which train Thatcher would have been on. But the thing about research is it’s like acting—it’s best if it’s invisible. If you can tell an actor is acting, then they’re doing a bad job of it. It was important for me to know all of that stuff, but I didn’t want to beat my readers over the head about how knowledgeable I am—I wanted to incorporate it so that the story stands out.

And then I had to learn how to make moonshine.

I love bad guys in books, but there’s something extra cool when you can describe them as bootleggers and moonshiners and crooked sheriffs. It feels like you had fun writing about them.

Yes! I think it’s a little easier for a reader to suspend disbelief—because they weren’t there. It’s like watching a television show. I tried to make the shock very real. I loved writing about all of the characters in this book—I enjoyed watching them create the scenes.

You may have avoided COVID, but you stuck close to brand, giving readers a kick-ass heroine in Laurel, and a sexy-as-hell hero in Thatcher. What can you share about the inspiration for those characters?

Because of the time period, and because there was such a fundamental change in women’s lives at that time, I knew Laurel needed to be tough as nails. She wouldn’t have wanted her life to be dictated by a man. My challenge was, she needed to be strong, but also be a little bit brittle. She had to be likeable, so I wanted to make sure she had some softness and vulnerability to her. Thatcher is the strong silent type. He wouldn’t have gone looking for the trouble I establish at the start of the book—but he’s not going to turn away from it, either. I kind of thought of him like a young Gary Cooper. He’s a nice guy, but you don’t want to mess with him.

Another challenge with the book was that I had to be careful about writing the love scenes. The emotions all had to be internal and under the surface, which I think just makes it that much more delicious. I really worked on getting the sexual tension in there without being too graphic. Some would consider the love scene quite tame, but I needed to be true to the time period and true to the characters.

Series books aren’t really your thing, but as I skimmed some of the early reviews for BLIND TIGER, I see I’m not the only one who hopes that this might be Book One in a series?

We’ll see. It’s not off the table.

As a mostly contemporary author, do you enjoy the process of writing a historical?

Absolutely. And I love to read them. I think the time was right for me to do this. I always try to challenge myself, and this was a good change of pace when I really needed one. Not so much from my career, but from what was going on outside the window.

Are we returning to present day for your next book?

I’ve still got some conversations to have. We’ll see. I’m not going to forecast, because I really can’t. But I would love to do another historical.