Listening to the Voices 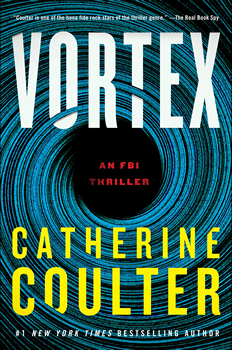 A new release from Catherine Coulter is always a special treat for suspense thriller fans—fans who will devour VORTEX, the latest in the bestselling author’s FBI Thriller series. But the publication of VORTEX is indeed a red-letter day, for it marks an incredible book #25 in the series.

In this fast-paced, action-filled read, we find Agents Sherlock and Savich working two different cases. Sherlock helps journalist Mia Briscoe delve into the disappearance of a female friend several years earlier, while Savich is working with CIA Operative Olivia Hildebrandt, who almost lost her life in Iran and is now tracked by assassins. Both cases are equally gripping, and it’s a tough call to say which was the more enjoyable.

Both Mia and Olivia are strong, engaging female characters that readers will love. Coulter shares what makes her fictional people so engaging and credible. “They’re always kicking around in my brain. I know it sounds weird, but I don’t tell my characters who they are—they tell me. I rarely know what they’re going to do, and if I try to tell them and they don’t like my plan, they don’t move until I apologize and do what they want.”

There is of course plenty of Coulter in them as well. “Lots. How can there not be, especially of course with the good guys? In VORTEX, Mia Briscoe many times apes my speech, as does Olivia Hildebrand (love that name, and yes, she named herself). Go figure.” There may not be so much of Coulter in the bad guys, but she’s still sure of their murderous motivations. “As for the villains, I’m right with them, I know who they are and what they want, and I have to figure out the smart way to stop them.”

In the case of VORTEX, Serena’s storyline came to Coulter first. “Serena Winters came to me one night,” she says, “and told me what happened to her. My brain started going 90 miles an hour. You may wonder what did happen to Serena—you’re gonna have to read VORTEX to find out and how her best friend, investigative reporter Mia Briscoe, uncovers the truth.”

While VORTEX is book #25 in the series, it was The Cove that started it all back in 1996. Coulter credits serendipity in the form of her sister for its inspiration. “In 1995, I was at a family reunion and my sister walked up to me, said without preamble, ‘There’s this little town on the coast of Oregon called The Cove. They make the world’s greatest ice cream and bad stuff happens.’ I went en pointe. At the time I was writing historical romances and romantic suspense, but this was hugely different. And that’s how it all started.”

Yet Coulter had no intention of there being more than one book. “When I wrote The Cove, it was to be a standalone suspense thriller. When the publisher asked what’s next in this new series, my jaw dropped to my knees. What series?”

Fortunately for millions of readers, somebody spoke up. “Now, I kid you not,” she says, “there was a voice in the back of my head that said, ‘What about me, Catherine?’ This was Dillon Savich, who appeared in the last part of The Cove. I smiled and said, ‘Okay,’ and that’s when the series started. In terms of what readers thought, The Cove spent nine weeks on the bestseller lists, so my conclusion was that nobody was unhappy.”

Everybody has their favorite book out of the 25, and Coulter has three of which she is particularly fond. “My top three favs are The Target, Backfire, and Nemesis. The Target and Backfire feature federal judge Ramsey Hunt and his finding a six-year-old girl (Emma) in the forest physically and sexually abused. He of course hooks up with Emma’s mother and they’re all on the run from the bad guys.

“In Backfire, five years have passed, and there are still more bad guys ready to cause mayhem. Nemesis is one of my favorites because Sherlock kicks big butt all by herself, and the story is very relevant and filled with intriguing characters. The villain is one of the most complex characters I’ve ever met.”

So much has changed in those two and a half decades since the publication of Coulter’s first FBI thriller. It’s difficult to conceive of now, but social media platforms didn’t exist then. Today, she has a huge and successful presence on them.

“Facebook became part of my world around 2008,” she says. “I remember thinking, isn’t this cool, I can finally talk to my readers as often as I want. Now writing my daily posts is a habit, and I simply don’t think about it. I enjoy so much all the feedback I get from readers when a new book comes out and all the back and forthing. Readers are amazing, and I’m so glad they make up a part of my daily life.”

Those readers will be delighted to hear that, yes, there’s a book #26 on the way. “I’m writing Reckoning, the 26th FBI Thriller, as we speak. It’s about a twelve-year-old girl who escapes being murdered when her parents are killed in their beds. The killers are never found. She becomes a prosecutor, her goal to avenge her parents. And guess what? The second plot involves Emma Hunt and her family, and yet again, they find themselves in deep caca.”

And impressive as that statistic of book #26 is, the FBI Thriller series is just part of Coulter’s much bigger body of work—more than 86 bestsellers in total.

Out of that staggering number, for Coulter, there’s one that gave her the proudest moment of all.

“Without hesitation, I’ve got to say the very first time I held my very first book in my hands,” she says. “I was in the lobby of my apartment building in New York City, and the concierge, eyes twinkling (he knew it was coming) said, ‘Here’s a package for you.’ I remember I slowly, reverently, opened it up, and there it was—my first book, The Autumn Countess. And what was amazing? My name was on it. That moment is like a snapshot in time that will never fade.”

On the Cover: Joy Fielding