The Secrets of a Close-Knit Community 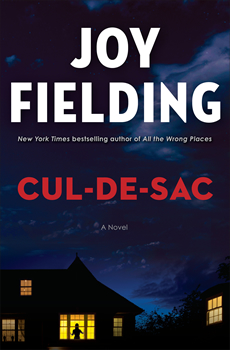 Joy Fielding struggled to write when the pandemic started. She and her husband had just returned from their Florida home to ride out quarantine in their Toronto apartment. Everything was closed. Her routine was shaken.

“I spent a lot of time binge-watching TV and reading,” she says. “We were cooped up, and the idea of writing…I just couldn’t.”

But at some point, she fell into a new routine—writing, reading, exercise. And without even trying, she got an idea. An idea that fired up her imagination and had her fingers flying across the keyboard.

“The book was just pouring out of me,” she says.

That book is CUL-DE-SAC, Fielding’s 29th published novel, a hauntingly prescient thriller set within a tight-knit community in which every family harbors a secret—and all of them have access to guns. One of them won’t survive the night.

In her first-ever interview with The Big Thrill, New York Times bestselling author Joy Fielding shares the secret to juggling multiple points of view, the shocking research she uncovered while researching this book, and what aspiring writers should do if they want to see their name on the cover of a published novel.

The first Joy Fielding book I ever read (years ago) was See Jane Run. I’ve subsequently gone back and read your earlier books, but that book in particular made me want to read more—and write—thrillers. What draws you to the genre?

I’ve always enjoyed suspense—in terms of movies and TV. I don’t read mysteries or thrillers as a rule because I’m generally disappointed. The least interesting part of a book for me is the whodunnit. I love the idea of exploring relationships between the characters, and I like the element of suspense. I learned that I could get my messages across and deal with serious issues, without lecturing, using the thriller format. My primary purpose is always to entertain, but I wanted to be able to discuss serious issues like wife abuse, kidnapping, and gun culture. If you miss all that, that’s fine too. My desire is just to tell a good story and keep the reader turning pages.

CUL-DE-SAC has such a great premise—it got me thinking about my previous neighborhoods. Before my husband and I bought this house, we almost always lived on a cul-de-sac. What inspired this story?

We live in a gated community in Florida—it’s quite gorgeous. Our street is one of the smaller developments—there are maybe 30 houses, and there’s no exit. When we first moved in, we knew everyone in our section. Now there are only a few of the originals left. I didn’t necessarily have it in mind when I wrote the book, but one of the offshoot cul-de-sacs around us, where I’m sure everyone would know everyone else. I liked the symbolism of the dead-end street.

You handle the multiple POVs with the kind of expertise that leaves me breathless with writer envy—and there was such diversity to them in terms of secrets, behaviors, etc. Which characters were you most drawn to?

When I started writing, I realized I had five families to juggle. That’s a lot of families. A lot of people. And each household has its unique stamp, a unique set of problems. And because this is Florida, they all have easy access to guns. As I saw each of these characters, certain things about them came to mind. I’m a big believer that who we are as adults springs from who we were as children, and so I always have to have a clear picture of how my characters started out and how that will affect how they see things later in life. In CUL-DE-SAC, I gave myself a good cross-section of characters. I didn’t make all the men horrible, tempted as I was. For instance, I created the mother-in-law who was a horrible woman. I was able to get into the male psyche a bit and explore a variety of ages. I have grandchildren, and that gave me a window into how the youngsters would act. In fact, the story the grandson writes in CUL-DE-SAC…my own grandson wrote that story. They were all interesting characters, different from one another. I enjoyed that.

I love how you chose to create a more middle-class neighborhood, rather than an overly wealthy community. As you created the world-building for Carlyle Terrace, what elements of the cul-de-sac were most important for you to include?

This is very much middle America. The only family with any substantial money is the two doctors, and I had to figure out why they were even in this neighborhood. But I did really want to show a slice of middle America. Racially, ethnically, it’s the same—predominantly White, which is what you would find in Florida. It’s not what you would call a racially diverse community. I wouldn’t feel comfortable writing that anyway. Of course, I have the right to write whatever I want—the whole notion of voice appropriation makes me crazy—but the key for me is, would I be able to do it justice? You always want to be believable and true to your audience. You never want to give them a false reality. But if I want to write from some perspective, I have the right to do that. And you have every right not to buy the book.

Obviously, CUL-DE-SAC is first and foremost a thriller, but the book covers some heavy topics—domestic abuse, PTSD, etc. What, if any, message would you like readers to take away from this book?

I always would prefer that people understood what I was trying to say. The problem with writing books that are as entertaining as mine is that people have a tendency not to treat them as seriously. They tend to think that they can’t be as worthwhile. But I’m not a big believer in showboating. I’m not interested in showing the reader how clever I am. Some writers are more interested in the language than the story—I’m more interested in the story. Of course, I want readers to think the story was well written, but I would also like them to absorb the message. For CUL-DE-SAC, I wanted to talk about the gun culture in Florida and that maybe the idea of everyone being able to have a gun isn’t such a good idea.

When I was doing research for the book, it was sheer mind-boggling to learn about the number of guns there are in the States. And Florida is an open carry state, so any lunatic can carry a gun anywhere. I’m not condemning it—if you want to have a gun in your house, that’s your right. But to walk around with assault rifles? To me, that’s just crazy. So I was very much making a statement: those kinds of guns can create tragedies where there doesn’t need to be. That was important for me to get across.

I’m not trying to say all guns are bad. But there is a certain thrill that comes from the act of firing a gun, and if you have one long enough, you’re going to want to use it.

CUL-DE-SAC is your 29th novel—congratulations on such a great career so far! I imagine you’ve weathered some ups and downs in the industry. What advice would you give to someone who is just dipping their toes into the publishing game?

Nobody becomes a writer to make money. You have to love what you’re doing. If you don’t love the concept of writing, the idea of spending the day in a room by yourself, then it’s not going to work. It’s what you have to do. Everyone thinks they have a book in them—they don’t. It helps to have an interesting life, but it’s not enough to just have an interesting life and a good imagination. You need the discipline to sit down every day and write.

And then you have to read everything, as much as you can, especially the thing you like to write. Read good writers who write what you like, because bad writing is contagious. Find a book you like and analyze why you like it. What about the characters did you love? What made you lose interest?

For a book to succeed, you have to start with a good strong plot, and then realize that everything happens because of the characters. As long as you believe in the characters, you’ll be able to keep the story moving along.

You have quite an extensive background as an actress. (You even got to kiss Elvis Presley!) How has that experience informed your writing?

I use the technique of a method actress when I’m envisioning the character. I’m using things from my own life. I think about what I would say, what I would do in any situation. This helps me in creating some of the characters too. I know drama. I know what creates drama. I know how to create a scene. I know dialogue—I have a natural ear for dialogue. I know how people talk. I don’t have an especially good eye, but I tend to remember everything people say and how they said it.

I don’t want to say too much about it, but I can share it’s the complete opposite of CUL-DE-SAC. It’s first-person, a small, concentrated story. And it’s probably different from my other books. Every book is quite different from the book before—I really want to do each differently. It will be a page-turner and a thriller—and yes, I’m totally ignoring COVID.

On the Cover: Richard Chizmar