The Accidental Creation of a New Genre 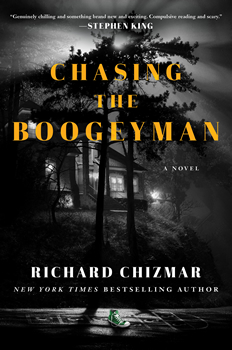 Horror fans know Richard Chizmar as the founder of the influential genre magazine Cemetery Dance; a prolific author, editor, and anthologizer of short fiction; and, lately, Stephen King’s frequent publisher and co-writer. Thriller fans are about to know him as the author of one of the year’s most inventive, compelling, and moving crime novels.

In CHASING THE BOOGEYMAN, Chizmar inserts a gruesome—and entirely fictional—serial-killer narrative into a largely autobiographical coming-of-age story. Set in 1988, the book finds a young Chizmar returning to his family home in Edgewood, Maryland, to spend the summer between his college graduation and his upcoming wedding. Chizmar mostly plans to hole up in his childhood bedroom to write horror stories and turn out the first issue of Cemetery Dance, but fate has something else in mind for him. When teenage girls begin disappearing from their bedrooms and driveways, only to turn up dead and mutilated hours later, Chizmar is drawn into the investigation that quickly consumes his hometown.

The book is presented as true crime, complete with pages of photos ostensibly culled from local newspaper coverage of the murders and the personal collections of some of the people involved. (The photos were staged by Chizmar, his son Billy, and a Baltimore production company.) It’s a remarkably convincing piece of metafiction; if not for the words “A Novel” tucked beneath the title on the cover, you might be tempted to wonder if a young Chizmar really did go toe-to-toe with a serial murderer. Stranger things have happened.

In his first-ever interview with The Big Thrill, Chizmar talks about the real-life inspiration for his fictional killer; how his novel was shaped by true crime classics and found-footage horror films; and the supernatural thread that runs through CHASING THE BOOGEYMAN. 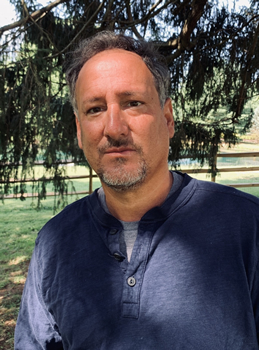 Tell me a little about the book’s background. Can you pinpoint anything that might’ve inspired it?

I’ve always wanted to write a novel set in my hometown of Edgewood, Maryland. For the longest time, I thought it would be a big fat coming-of-age horror novel in the vein of Stephen King’s It or Dan Simmons’s Summer of Night. I adore those kinds of stories and always figured I had my own version to tell. But CHASING THE BOOGEYMAN came out of nowhere and more or less blindsided me. Edgewood, back in the ’70s and ’80s, was very much a typical blue-collar small town and growing up it was pretty much my entire world. Picture the golden-hued suburbs from the television series The Wonder Years (but with a bit of a dark side) and you have a fairly good image of Edgewood.

During the late 1980s, we got an up-close and personal glimpse of that dark side. There was a series of home invasions where a masked man terrorized sleeping women. After breaking into the houses, he stood by their bedsides and gently caressed their hair or bare legs until they woke up—and then, without a word, the intruder fled and vanished into the night. This happened a couple dozen times—enough so that police increased patrols and people started buying extra locks for their doors and windows and installing alarm systems—and the man was never caught. The local newspapers began referring to him as the “The Phantom Fondler.” I often found myself imagining what might have happened if the man had escalated from touching and fleeing to acts of physical violence and even murder. CHASING THE BOOGEYMAN ended up being the answer to those wonderings.

What are some true crime books that were especially influential, and what did you admire about them?

I’m a longtime reader of true crime—from the old standards like Ann Rule’s The Stranger Beside Me and Green River, Running Red to James Renner’s True Crime Addict and Michelle McNamara’s I’ll Be Gone in the Dark…along with so many others. The amount of painstaking research that goes into these books, the innate difficulty of writing about such tragic subject matter and doing so with equal and fair measures of empathy and compassion and objective reporting—it boggles my mind. I’ve always admired and respected these authors for pulling off such a difficult juggling act and doing it with such grace and professionalism. 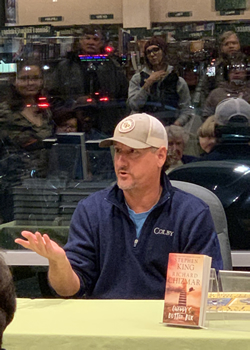 Chizmar at a book signing for Gwendy’s Button Box, a 2017 novella he co-wrote with Stephen King.

The book is exceptionally moving, both as an autobiography and as top-notch crime fiction. How did you ensure that the story you created was as emotionally resonant as the one you lived?

To be completely candid, I struggled with this in the beginning—a clear case of overthinking and not fully trusting myself as a writer. The idea that anyone would care about the goings on in my little hometown back in 1988 seemed far-fetched to say the least. But as I got pulled deeper into the story, I pretty much just took a deep breath and a leap of faith. It really came down to believing that the story I had to tell was one that readers would enjoy and emotionally connect with. Once I found that inner belief, the rest was a breeze.

I’m curious about how you wove those two aspects of the book together. How did the book’s autobiographic component affect your usual plotting/writing process?

The autobiographic component actually made the process a whole lot easier. I had a treasure chest of so many vivid memories and personal stories to draw from, and the multiple settings and characters formed crystal clear in my mind. Writing CHASING THE BOOGEYMAN was a joy from start to finish, even on those rare tough days. At times, it felt almost like an exercise in self-indulgence. My mother has been gone since 2001 and my father passed away in 2007, but for the months I spent writing CHASING THE BOOGEYMAN, they were both alive and well and living in the same house as me. I loved that. The same goes for many of my childhood friends. Some are gone now, others are scattered to the wind, but not during the writing of this book. For a short time, we were all back together in one place and time. Almost like stepping into a time machine. 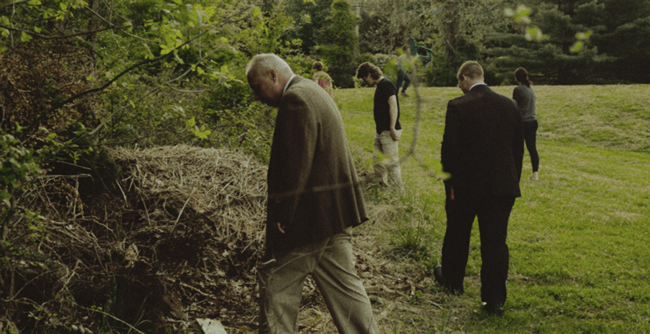 To replicate the feel of a true crime novel, Chizmar worked with a Baltimore production company to stage several pages of “crime scene photos” for CHASING THE BOOGEYMAN.

How did your friends and family feel about becoming characters in a serial-killer story?

I’m happy—and somewhat relieved—to report that everyone mentioned in the book was thrilled to be included. Everyone, that is, except one important person: my wife. Kara is very much a behind-the-scenes type person, so she cringed each and every time she stumbled upon a passage about herself. My biggest fear was that a major editorial note would come back asking me to expand her role in the story. Thankfully, that didn’t happen!

Was the concept difficult to explain to editors or your agent?

I can’t speak for editors, but I absolutely had an interesting first conversation about the book with my agent, Kristin Nelson. Considering my reputation as a sort of recluse—rarely attending book conventions or genre get-togethers—I think she was rather shocked that I had decided to feature myself as the main character of my new novel. In fact, that was one of the main reasons I didn’t tell her about CHASING THE BOOGEYMAN until I was finished and had sent her the manuscript. I didn’t want her to talk me out of it! Fortunately, a couple weeks later, she called and told me that she’d finished reading the draft and I’d won her over. 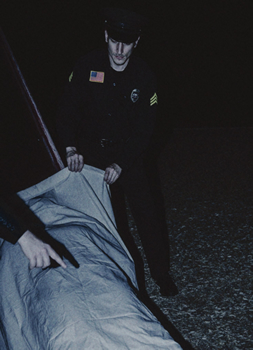 Another faux crime scene photo from the pages of CHASING THE BOOGEYMAN.

Did you find any inspiration or direction in especially convincing found-footage movies, like The Blair Witch Project?

I sure did. Initially, I really wanted to “Blair Witch” the book—that was, in fact, the exact phrase I used when describing my plans. I wanted to present CHASING THE BOOGEYMAN as a completely true story. Design a fake website and plant a series of articles online so when people Googled the story, there would be plenty of material for them to find. I also had thoughts of producing a documentary about the murders in Edgewood. A reinforcing background piece similar to what the creators of The Blair Witch Project did for their film. That’s part of the reason I included black-and-white photographs at the end of most chapters. I felt they lent the book an authenticity that words alone couldn’t provide.

But, alas, it was not to be. The very idea gave the Simon & Schuster lawyers big-time nightmares and led to a handful of phone calls, not to mention the disclaimer that appears at the beginning of the book, and the “A Novel” tagline on the front cover.

Speaking of those photographs, can you tell me a little about them?

When I’m reading a true crime book, one of the first things I do is turn ahead to the photo section. I sit there and soak in the faces of the law enforcement officers, the suspects, the killer (if he/she was caught), and yes, even the victims and their families. Staring at those faces and then reading about their involvement in the story really adds a sense of stark reality to the experience for me, and I often find myself flipping back and forth to take another look. Once I understood how CHASING THE BOOGEYMAN would be structured, my mind immediately jumped to the idea of including photos of my own. My son, Billy, and I took many of the photos and our good friends from Sympatico Media took the rest, using friends and actors as stand-ins. 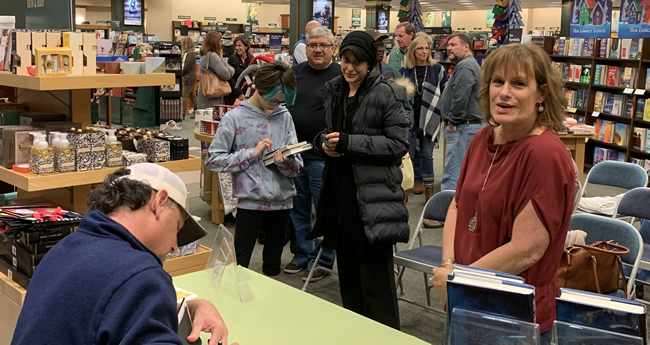 There’s a hint of the supernatural in the form of a chilling story you tell about something that happened to you as a child. Why did you include that?

There’s an underlying, almost hidden supernatural thread running throughout the book—both in the past and present. I included this mainly because I believe that most small towns have their share of spooky stories and legends to draw from, and when people get scared and panicked, their minds go to some very dark places.

Do you feel like you’ve created a new genre?

If I have, it was pretty much a happy accident (which are the best kinds of accidents). Blending the true crime format with a partially fictitious autobiographical storyline was simply the only way I knew how to tell this story. I wish I could take credit for coming up with the idea from the onset and following through, but that simply wasn’t the case. As is often the case, it just fell into my lap.

Can you tell me anything about what you’re working on next?

I’m superstitious so I can’t give up many details, but here you go: After wrapping up a handful of short stories and introductions for various anthologies and collections, I’m about to start working on a new novel. I’m very excited about it, and it may or may not be connected to the dark deeds that transpired in CHASING THE BOOGEYMAN. Only time will tell.