Bursting with Fog and Wind…and Murder 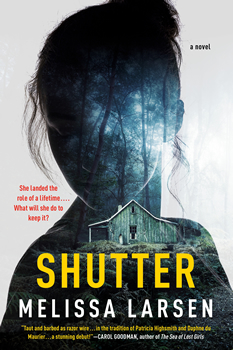 Everyone deals with grief differently. Some look inward. Others seek support from family and friends. And a few…run from it.

That’s certainly the case for aspiring actress Betty Roux, who, after her father’s death, breaks up with her boyfriend, pushes her mother away, and leaves behind her old life to pursue her dreams in New York. Or something. In reality, Betty doesn’t know what she wants—she just knows she needs to get away.

So of course, when renowned indie filmmaker Anthony Marino offers her an opportunity to star in his new project, she jumps at the chance. Not only will she be following her acting dream, she gets to spend a month in a cabin on a private island off the coast of Maine.

Not creepy at all, right?

More red flags are raised when Anthony renames Betty—Lola. She tries to convince herself that this is her chance to reinvent herself, but as soon as they begin filming, Betty realizes she knows almost nothing about the movie’s premise—or its mysterious director.

In this interview with The Big Thrill, Melissa Larsen shares insight into what inspired her creepy debut, the parallels between her life and her character’s, and how she’s been navigating pandemic-fueled writer’s block. 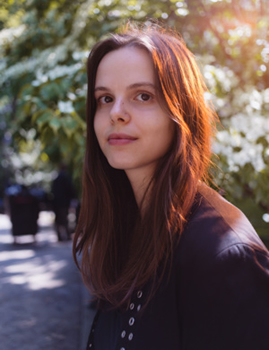 I was hooked by the premise of this book, let alone when I actually started reading it—it’s fantastic! I’d love to hear more about what inspired SHUTTER.

Oh, thank you so much! Is it strange for me to say, “Me too?” Writing, in its best moments, truly feels like reading—just with a bit more work involved—and there were certainly parts of writing SHUTTER that felt like devouring my new favorite novel. When I first started writing SHUTTER, I was obsessively rereading Marisha Pessl’s Night Film, Tana French’s The Likeness, and, somewhat later in the process, Daphne du Maurier’s Rebecca. I couldn’t get enough of these worlds—the houses (Manderley!), the characters that felt like my friends, the mysteries. I wanted to disappear, as much as I possibly could, into an atmospheric thriller, in a story bursting with fog and wind and, of course, murder. I wanted to lose my bearings, in the same way that Scott, Cassie, the second Mrs. de Winter, and Betty do.

So I knew what kind of novel I wanted to write. And then…when I thought about Betty, and what her world would look like, I had this sudden image of her, dripping in blood, reaching for me, asking me for help. From there, the story clicked—slowly, painstakingly—into place. 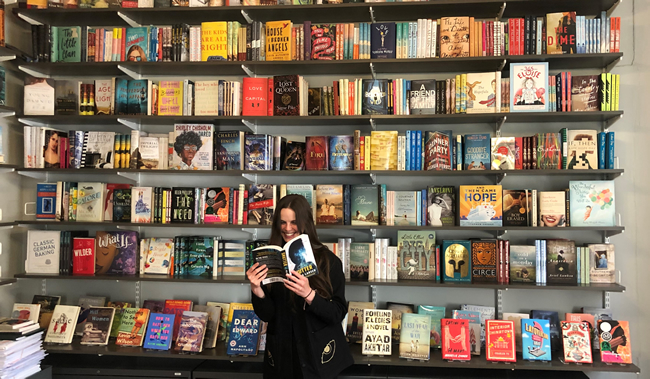 Larsen at The Book Group literary agency office in May 2021

Though I have never had aspirations of being an actress, the Hollywood world has always intrigued me. You did a great job of capturing the desperation that might be felt by an actress trying to land a gig—and how she might be blind to any red flags along the way. What kind of research was required to dive into Betty’s psyche?

I just have to say, the world of Hollywood is endlessly fascinating to me, too! Even though Anthony Marino is not necessarily in that world when we meet him, he is certainly a product of it, and the stories and legends it propagates. I found myself reading and watching interviews with film directors, both because I love movies and I want to know their processes, but also because I find the idea of directing a film to be such a peculiar form of storytelling. I once read a quote from a film director, and I haven’t been able to find it since, that said directing a film is like trying to paint 40 feet away from the canvas, with a team of people actually putting the colors to the canvas. I could not do that. I’m too much of a control freak, at least when it comes to my writing, to stand that far back from the canvas.

The research for Betty’s psyche, though, was somewhat of a personal exploration. I started writing SHUTTER in a period of transformation and grief. At the time, I was Betty’s age, and while we don’t share too many things in common, I was able to use some of her emotional life as an outlet, a chance to express and to pursue the darker threads of my own personality, my own fears, and my somewhat…unfortunate history with men. In the instances when Betty’s and my experiences really diverged, I had to follow her. I applied for a writers retreat on a small, private island off the coast of Maine—the Norton Island Residency for Writers and Artists, check it out!—so I could live some of Betty’s actual experience. 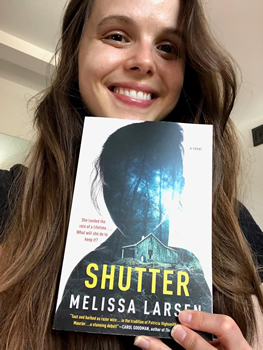 Larsen unboxes her first copies of SHUTTER in June 2021.

Speaking of Hollywood, this book feels primed for the big screen. If you could cast the leading role, who would you choose and why?

This is such a fantastic question, and yet it’s so difficult to answer! Anyone who could capture Betty’s mixture of vulnerability and strength. I could personally see someone like Bella Heathcote or Emma Roberts, but a former student of mine suggested Kristine Froseth, and my friend Gare (who happens to have an incredible bookstagram account that features dream casts of the thrillers he reads!) suggested Lucy Boynton, and I am in love with these two choices!

Betty has such a driving passion for escape—which I think is super relatable for those of us who have been cooped up during the pandemic. All of the characters are well developed. Was there one that was more difficult for you to embody?

After a year and a half of a global pandemic (and it’s not over!), I find myself with increasing frequency thinking, “It’s time to run away and start a new life somewhere else,” like Betty. If only!

Anthony Marino might have been the most difficult character for me to write. Not because I couldn’t find common ground with him, but because he is a difficult person. He can be cold, manipulative, and distant, and he has his own set of rules and ethics. He struggles to connect. He is, quite simply, not the most immediately lovable character. And still, despite all of this (or perhaps because all of this), Betty is drawn to him.

He is also the driving force of much of the story. The film is his (until it isn’t). And I think I had to spend a lot of time with him, unpacking the layers of his personality, because there is so much of him in this story.

I’ve gotten many messages from friends and readers, and there is no real consensus on his reception—except that he’s a walking red flag. Some hate him point-blank, others see him as a romantic hero or a reminder of a terrible ex-boyfriend. He is, to put it kindly, polarizing. 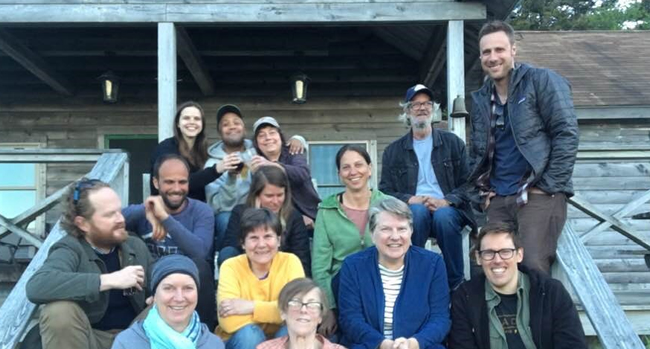 The past year and a half have been a bit rocky for everyone, but especially people in the arts. Despite a thirst for content, some writers have struggled to produce (no judgment!) and some have used quarantine to write more than ever. As a debut author, what can you share about how the pandemic altered, inspired, or thwarted your writing process?

Not to be too dramatic, but 2021 has (so far) been a perfect storm of writer’s block. My debut novel came out a little over a month ago, so for the first half of the year I have been at work promoting, celebrating, and agonizing over it, on top of teaching creative writing classes remotely over Zoom, while also facing the daily stress and uncertainty of a pandemic. In 2020, I felt a tremendous burst of creative energy. I lost myself in my writing. Recently, though, to cope with some of my anxiety, I’ve prioritized refilling my creative well. This means teaching (which is such a joy!), hiking, and devouring as many novels and films as I possibly can.

The Big Thrill is as much for aspiring writers as it is for readers. I’d love for you to share a little about your publishing journey. 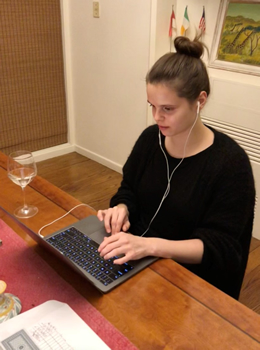 Larsen works to meet a revision deadline in January 2018.

I’m a bit of an outlier, I think, with my publishing journey, because I initially had worked in the industry, from internships at various literary agencies to working as an editorial assistant at Penguin Random House. I was able to meet the woman who became my agent (the magnificent Jamie Carr!) in a more informal setting, right when I was leaving my job to pursue my MFA. After a year of working on my novel, I sent Jamie my manuscript and the rest is history.

Just kidding! We worked together for months refining the story, then strategizing on who to send it to, and then, eventually, after it found its home with an editor (the indomitable Danielle Perez!), Danielle and I then spent about two years, in total, getting the story right. It was a long journey to get SHUTTER out in the world. I should mention that I’m grateful for every second of that journey, but there were many rejections and many moments when it felt like it was never going to happen.

What draws you to this genre?

There is nothing like a thriller. I love the tension, the drama, the catharsis. The terror! Through a thriller—whether that’s a murder mystery, a psychological thriller, horror, etc.—we can explore our fears and anxieties. We can name them and put faces to them. We can explore the darker sides of our own personalities and our own impulses. And, also, because there’s no greater reading experience than getting lost in a novel that grips you, that raises the hairs on the back of your neck, that has you turning pages deep into the night because you have to know what happens next.

Speaking of that…what can you share about what you’re working on next?

I can’t share much because I’m very much still in the thick of it! What I will say is that I find myself obsessing again—in the same way as when I wrote SHUTTER and was drawn to Night Film and The Likeness and Rebecca—I now find myself inexorably drawn to the Paul Verhoeven thrillers. That’s all I can say. But I’m trying to take my own advice—I’m not holding back!