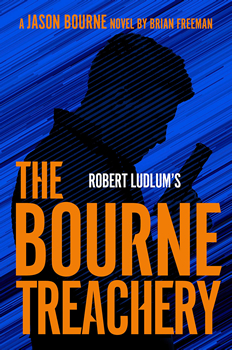 Robert Ludlum’s Jason Bourne series is an icon of the thriller genre, loved by millions of book and film fans for its propulsive action. Since Ludlum’s death in 2001, the series has been skillfully shepherded first by Eric Van Lustbader, and now Brian Freeman.

In this The Big Thrill interview, Freeman takes time out of his busy schedule to talk about his second entry into the franchise—THE BOURNE TREACHERY.

Congratulations on the release and thanks for talking with The Big Thrill. Our readers are always keen for anything Bourne, so tell us about THE BOURNE TREACHERY.

Absolutely, who doesn’t love Jason Bourne? This is my second Bourne novel, following The Bourne Evolution last year, and I’m incredibly excited to have it in reader hands.

What I love about writing Bourne is that I can bring a combination of adrenaline, twists and turns, and emotional complexity to the story. That’s definitely true of the new book, THE BOURNE TREACHERY. It’s an action thriller with some really memorable characters—and I hope you’ll feel your jaw dropping at that last twist.

My reboot of the series brings Bourne into the middle of the modern era, and the plot of THE BOURNE TREACHERY should feel timely—an all-new cold war with Bourne going tit-for-tat against Putin’s Russia. In this book, Bourne and his lover, Nova, try to get a Russian defector out of Europe, but the mission fails spectacularly at the hands of a wily assassin who calls himself Lennon. Three years later, Bourne is brought in to defend a Russian scientist against a new threat by Lennon, but he soon discovers that everything he’d been told about that past mission was a lie. Soon, it’s double-cross upon double-cross as Bourne and Lennon do battle across the UK and US.

One of the trademarks of the Bourne series is how Jason’s past darkens his present. Tell us a little about how that plays out in THE BOURNE TREACHERY.

It’s Bourne’s complexity that has made him such an enduring figure in thriller literature. He’s not a superhero. He’s fractured by the loss of his memory. He not only struggles with the fact that he has no past, but also with his “identity” as a human being. Is he a killer? Is he a moral man? That struggle is a big part of what makes readers relate to him.

The movies portray Bourne mostly as a cynical loner, but that’s really not how Ludlum created him. In the Ludlum books, Bourne’s relationship with Marie is at the center of his story, and I wanted to preserve Bourne’s passion for the strong women in his life in my reboot. He resists relationships because of the world he lives in, and yet he’s not a loner. On an important level, he needs a woman in his life. However, as you’ll see in THE BOURNE TREACHERY, that need sometimes proves to be Bourne’s Achilles heel.

We’re seeing more and more thriller authors slide into the comfy pants of existing characters and franchises. Can you elaborate on the opportunities and the pressures that come with that?

Once the excitement wears off, it’s pretty intimidating to step into the shoes of a thriller giant like Ludlum and an iconic hero like Jason Bourne. Plus, Bourne represents a special challenge, because there have been so many iterations of him over the past 40 years. People know Bourne not only from Ludlum’s novels, but also from Eric Van Lustbader’s legacy books, and from the Matt Damon movies.

I decided early on that the best way to tackle this project was to start over—to give Bourne a total “reboot” while staying true to the essence of Bourne’s character in Ludlum’s original novel. That’s really what I was trying to do in THE BOURNE EVOLUTION.

Of course, trying to copy a distinctive prose style like Ludlum’s would seem like a caricature. Instead, I tried to let his intense dramatic approach flow into my own style—to make it a Ludlum book as written by Brian Freeman. That hybrid approach really seemed to work, because I was delighted by how many readers said reading The Bourne Evolution felt like picking up a new book by Ludlum.

For me, writing THE BOURNE TREACHERY was actually harder. The first book felt like a Ludlum tribute—bringing Bourne back to life in an all-new setting—but with the second book, I had to take ownership of the series and move the character forward. If all you do is write an action novel where Bourne stays the same, readers will get bored pretty fast. Instead, he has to keep growing and changing, reflecting his emotional and psychological complexity. Once I gave myself “permission” to take Bourne in new directions, the book really came together. And THE BOURNE TREACHERY feels like the perfect next step for this amazing hero.

A lot of our readers like to know about the craft and process side of how their favorite writers work. So, tell us how you attack the average day and a novel?

Even though I’ve been a full-time writer for nearly 20 years, it’s still a 9-to-5 job for me. I love getting up and staring at that blank screen—well, at least I do on most days!

My daily process depends on where I am in a novel: in the “creative” stage of working up the story and characters, in the “drafting” stage of getting words on paper, or in the “editing” stage of polishing the completed manuscript. When I’m creating the book, I fill up multiple notepads with page after page of concepts, questions, scenes, and character notes. I start with a blank notepad in the morning, and by the end of the day, my notepad and whiteboard are all crammed with ideas.

When I’m actually writing, though, I tend to split my day in half. I edit my most recent chapters and block out what comes next in the mornings. Then the bulk of my new writing happens in the afternoons. My goal is to get about 10,000 words done in an average week—usually a little slower at the beginning of a new book, and a little faster as I race toward the climax.

As for the editing phase, that’s my favorite part, when the words are all there and I get to tweak and polish. I actually edit by reading the book aloud to myself, to make sure everything flows smoothly. So, I have to close the office door to make sure I’m not driving my wife crazy!

I’ve signed on for two more Jason Bourne novels, so get ready for Bourne to be back again next summer! Readers can also look forward to two new standalone novels from me called The Ursulina and Girl of my Dreams, plus the next Jonathan Stride novel, The Zero Night. Looks like 2022 will be a busy year.