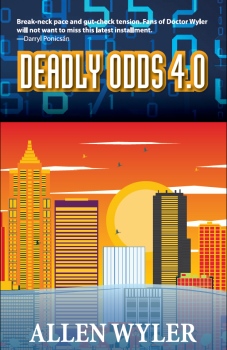 In this fourth adventure, DEADLY ODDS 4.0 cyberthriller series, reformed hacker Arnold Gold is plunged into a race against time when he’s hired by a prestigious Seattle law firm to resolve a ransomware attack that threatens its very existence. But from the start, Arnold has ill-defined misgivings about his secretive, control-freak client, and begins to suspect he’s being used to cover up an inside job. But by who? And how far would the thief go to stay in the shadows?

The more he investigates, the more Arnold must walk a fine line between preserving his professional reputation and his personal honor. Especially when it becomes clear that the thief is willing to move up to murder—and Arnold Gold is in the crosshairs.

Arnold Gold being a series, the character primarily drives the stories. And Arnold, being a reformed black hat hacker turned FBI confidential informant, is great fodder for the main topic of cybercrime. Together they’re a fertile source of interesting situations.

Getting the details correct. For this reason I have a rich source of experts who tolerate my endless questions and provide great explanations.

I believe the stories in this series provide easily understandable information about timely issues with computers, a technology we use every day. DEADLY ODDS 4.0, for example, explores this issue of ransomware.

It’s fast-paced, informative, timely, and further develops the interesting development of a socially challenged misfit protagonist. Arnold Gold is coming into his own person while gaining social and interpersonal skills he never acquired throughout school.

Some of my favorites are all the usual suspects: John Sanford, Michael Connelly, Robert Crais, and Don Wilson. They’ve all influenced me but in various ways not easily identified. I do not attempt to copy their styles, but simply adsorb their excellent storytelling craft as an enjoyable way of learning.

Allen Wyler is a neurosurgeon who left practice in 2002 to be medical director for a medical technology start-up, Northstar Neuroscience, which went public (NSTR) in 2006. Leveraging a love for thrillers since the early ’70s, Wyler began writing fiction and published his first book in 2005. At the end of 2007, he retired to devote full time to writing. He served as vice president of the International Thriller Writers organization for several years and has been nominated twice for a Thriller Award. He lives in Seattle with his wife.