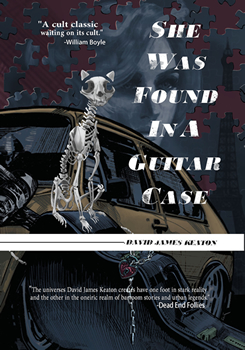 David Keaton, a native of Kentucky, received his MFA from the University of Pittsburgh and was the co-founder and editor-in-chief of Flywheel Magazine. He won a Best Short Story on the Web Spinetingler Award for a roulette scam in Crime Factory, and his coach-killing contribution to Plots with Guns #10 was named a Notable Story of 2010 by storySouth’s Million Writer’s Award. He was also nominated for a 2012 Pushcart Prize. Keaton’s work has appeared in more than 50 publications.

In his contemporary thriller, SHE WAS FOUND IN A GUITAR CASE, a manic, misguided quest for answers sends the main character Dave up the food chain of law enforcement corruption and down the increasingly bizarre Florida coastline. Battling cops, biker gangs, backwoods Bigfoot hunters, and getting tangled in tourist traps (both figurative and literal), he eventually stumbles onto a conspiracy involving body cameras, love locks, and a grand psychological experiment which may reveal the invisible walls and revolving doors of the nation’s prison system.

In some ways, Keaton believes this novel is a response to the influential and ever-growing “missing women” genre. Though there is something admittedly fascinating about these novels and films, particularly how such crimes would impact our own lives, he felt like the swirl of incompetence that surrounds such real-life cases should be explored.

“I also enjoyed how Gone Girl blew up these tropes somewhat by focusing on the hapless husband, but I’ve attempted to make an amateur detective’s plight both simultaneously more realistic and more unhinged,” he says.

The novel was initially conceived as a thinly-disguised account of Keaton’s time in Louisville stressing about what would happen if one of his loved ones vanished, and how inept his attempts to solve the mystery might be. 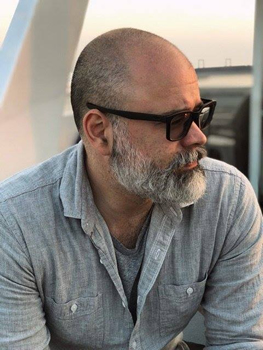 “Combined with the stress of having closed-captioned hundreds of frustrating crime shows like Cold Case Files for a living, I would find myself dwelling on the possibilities of unsolved crimes on my long commute home,” Keaton says. “Sort of like the ‘red car syndrome’ where if you buy a red car, you then begin to see them everywhere. I developed a bit of a ‘crime show syndrome,’ meaning the hovering threat of perpetually uncracked cases and a grim world of possible perpetrators had suddenly infected my day-to-day existence.”

While the novel is exactly 67 percent true, most of the author’s family and friends almost always find the “true” parts impossible to believe—ironically, suspecting sections he’d considered much more unrealistic to be the most plausible.

When asked about the hardest part about writing, Keaton states it’s the period following the release of a story or book when the energy begins to die down.

“In particular, it can feel kinda grim when you realize the indifference to just another book out there in the world,” he says.

In the novel, the main character’s wife is working on a dissertation regarding prisons, so the majority of the research went toward making her claims about prisons and prisoners seem authentic.

Keaton says he feels most creative after eating a lot of sugar or right after viewing or reading a great or terrible movie or book, respectively.

“But the most inspiration comes after crossing paths with art that is ‘almost’ good,” he says. “To imagine what could have made this art great is a good incentive to just create your own.”

Keaton cites Chuck Kindler (basis for the character Grady Tripp, as seen in the novel and film adaptation of Michael Chabon’s Wonder Boys) as pivotal in beginning his writing career. His remarks on Keaton’s early manuscripts (‘Well, the prose ain’t pretty, but it’s real!’) resonated a lot with the author. This made him write more and take the next step: send it out for others to read.

Keaton currently teaches composition and creative writing at Santa Clara University. Anyone interested in Keaton and his work (two other completed novels might make it into the world any day now) can go online. His Twitter @spiderfrogged is best for now, and if any Southern California readings start back up around him, that’s where he’ll announce it. Also, you might find one to a dozen Good Will Hunting memes over there, depending on how ambitious he’s feeling that day.

David James Keaton’s first collection, FISH BITES COP! Stories to Bash Authorities was named the 2013 Short Story Collection of the Year by This Is Horror, and his second collection, Stealing Propeller Hats from the Dead, received a Starred Review from Publishers Weekly. He was also co-editor of Hard Sentences: Crime Fiction Inspired by Alcatraz and Dirty Boulevard: Crime Fiction Inspired by Lou Reed. He lives in California.