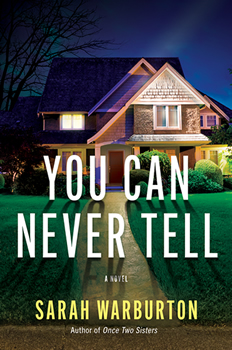 Psychological thriller fans beware—Sarah Warburton is out to scare you, creep you out, blow your littlest fears out of proportion and max them out. That’s just what you’ll get with the August 10th release of her second novel, YOU CAN NEVER TELL (Crooked Lane), a taut, intensely emotional first-person serial killer tale that diverges from the more traditional profiler-hunts-murderer formula with a story told through the lens of friendship. The narrative of YOU CAN NEVER TELL is couched in the broadcast of a true-crime podcast, brilliantly heightening the suspense.

The harrowing tale picks up after Kacy Tremaine, an art museum curator, and her engineer husband, Michael, move from New Jersey to an upscale Houston suburb to escape the betrayal and humiliation Kacy suffered after being framed for embezzlement by her co-worker and supposed best friend. Against this backdrop, Kacy experiences heightened anxiety from the insecurities most people encounter in moving away from the family, friends, and familiar places they’ve known all their lives. Fear of exposing herself to more hurt keeps Kacy initially homebound in her new community.

“I moved to Sugar Land, Texas, just like Kacy, and faced a lot of the same uncertainties, especially on how to make friends,” Warburton says. “Luckily, Texas is full of friendly people and welcoming community groups. I made a lot of friends in the 11 years I lived there, friends I still miss after moving to Virginia.”

That same openness enables Kacy to step out of her comfort zone and make new friends amongst her neighbors. When baby Grace makes her debut later that year, Kacy’s relationships deepen with friends who are mothers, allowing her to settle into a state of suburban bliss. 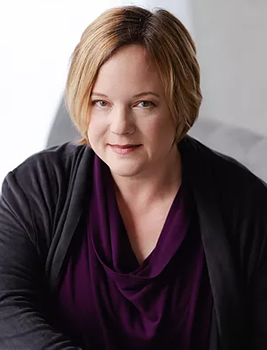 But good friends are not always what they seem. They have secrets, none more horrific than those of Kacy and Michael’s new best friends—most aptly described as your friendly neighborhood serial killers, a charismatic couple nobody would ever suspect of such dastardly deeds. Once the couple’s secret is out, Kacy’s world is turned upside down. She sees danger peeking around every corner, the threat of a vengeful killer coming after her, Grace, Michael, her parents. With a newfound inner strength born out of her new role as a mother, Kacy takes matters into her own hands to protect those she loves, willing to risk her own life to do so.

An avid true-crime fan, Warburton was inspired to write YOU CAN NEVER TELL by a singular takeaway from a Casefile podcast retelling of the 1960s Moors Murders, a recounting of the five brutal child murders perpetrated by a suburban husband-and-wife couple in Manchester, England: the scene in which a neighbor walks in on a gruesome murder-in-progress and is asked to help clean up and dispose of the body.

“I just couldn’t stop thinking about that whole scene and the aftermath—an innocent witness feels compelled for safety’s sake to assist brutal killers, and when he returns home, races to the police station with his wife to turn in their best friends for murder. My mind kept turning over the strain that would put on a marriage, not just from the terror of the night, but the emotional and psychological distance created when one partner experiences something so horrifically traumatic which the other partner can’t relate to.”

For Warburton, the biggest challenge to writing Kacy’s story was keeping her in the dark, unaware that her newest best friend is part of a serial-killing couple until about a third of the way through the book. “I couldn’t have us all going along thinking everything was okay, so I weaved snippets of a fictional podcast throughout the story that show Kacy is living through a true crime story before she realizes it,” she says. ”It serves as a kind of Greek Chorus commentary on the action, a counterpoint to Kacy’s story as she lives it. It allowed me to play with our enjoyment of true crime and the tension between a story that you listen to and the life you actually live.”

Rather than a single narrative voice to the podcast, as Casefile uses, Warburton’s fictional podcast features two unapologetically irreverent women to underscore the theme of YOU CAN NEVER TELL—friendship. She spent a good deal of time researching female friendships before sitting down to write the story.

“When it comes to family, you’re stuck with them whether you like them or not,” she says. “Friends are optional, but also totally necessary. Men tend to bond over doing things, such as Michael and his deadly neighbor do with a building project.” (From that perspective, it seems almost natural for the guy to ask Michael, “Hey, buddy, can you lend me a hand? I need help chopping up this body. I’ll buy you a beer afterwards.”)

“Women, however, grow close from talking, sharing their thoughts, their feelings. The very spiritual nature of female friendships generates a great deal of trust, a confidence that when betrayed, can leave a deep wound that devastates the injured party,” Warburton says.

Kacy, having experienced a double dose of duplicity from women she considered her best friends, is left to question herself and her worth, and even blames herself and her naivety for failing to see through the masks people wear in hiding their true character. As the story surges to its climactic peak, Kacy’s own character arc reaches its apex. No longer a weak-kneed victim, she is a decisive, take-charge woman, one able to rise above her own fears, face down her adversaries, and fight her own battles.

YOU CAN NEVER TELL is Warburton’s second psychological thriller. Her debut, Once Two Sisters, explores the conflicts, closeness, and competition between siblings. Warburton enjoys writing the genre because it lends itself so well to first-person POV.

“That perspective is all about a person’s thoughts, what they don’t know, and the fears and misconceptions that arise from them,” she says. “Getting inside a character’s head as I write, it’s as if I’m really telling someone’s story as they live it, what is happening to her, what she’s feeling. It’s fun to write. Definitely a rush.”

When all is said and done, Warburton’s enjoyment of the genre and the writing is what makes YOU CAN NEVER TELL a great read, one that will give psychological thriller fans a rush, too!

Sarah D. Warburton lives in the mountains of Southwest Virginia. Her work has appeared in the Southern Arts Journal, Women on Writing, Embark literary magazine, and Oyster River Pages. Her first novel, Once Two Sisters, was a Publishers Weekly pick of the week, a CrimeReads recommended debut, and a PopSugar featured title. Her second novel, YOU CAN NEVER TELL, will be published in August 2021 by Crooked Lane Books.