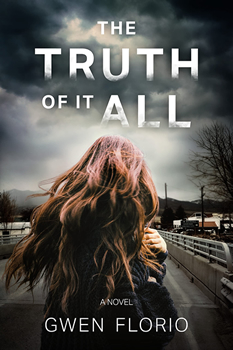 The truth is, THE TRUTH OF IT ALL languished for more than a year before it was pulled out of storage and given a relook thanks to a publisher’s offer of a two-book deal. At least that’s how author Gwen Florio recalls it happening.

In THE TRUTH OF IT ALL, public defender Julia Geary moves through life with simmering resentment at her husband, a soldier killed in Iraq, leaving her a single mother; at her low-paying job, and at her overbearing mother-in-law, whose home she shares. She longs for a breakout case, and it arrives when members of the high school soccer team report seeing a teammate—Iraqi refugee Sami Mohammed—assaulting a girl in the locker room.

In a town where animosity against refugees has already reached a fever pitch, Julia throws all her energy into Sami’s defense. Then she begins receiving vicious threats against her family, and a senseless act of violence leaves Sami in a coma. If Sami survives and Julia can prove him innocent, it will be the case of a lifetime. But now it’s her life that’s on the line.

Florio says she wrote the novel after she finished writing Silent Hearts, which took 15 years from first version to finally seeing print.

“I read a story about a case in Idaho involving two teenage refugees accused of assaulting a young girl,” she says. “It drew the attention of right-wing/white supremacist groups around the country and soon was being portrayed as a Syrian gang-raping the girl at knifepoint. That wasn’t true, but it stirred up talk of Sharia Law—and ISIS—coming to Idaho. The national media descended, and town officials felt compelled to hold meetings trying to counteract the false narrative, to no avail. I wanted to examine that dynamic, particularly as a new refugee program in my community of Missoula, Montana drew protests with similar anti-Muslim accusations.”

In combination with the idea for the plot was setting. “These mountain communities are overwhelmingly White and Christian, and it seemed part of their objections to the refugees had to do with the newcomers’ race and faith.”

This gave Florio the opportunity of writing about race/ethnicity in a place where it’s usually not a factor because of the extreme lack of diversity in these communities.

Florio also wanted to change up her female protagonist in THE TRUTH OF IT ALL.

“So many of the books I read with female protagonists involve either kick-ass women or women with the same make-or-break issues facing male protagonists—alcoholism, divorce, kidnapped children, etc.,” she says. “My protagonist is a single, widowed mom with a little boy dealing with the everyday realities that grind so many women down: juggling a demanding career, low pay, sexist boss, a day-care system set up for people with 9 to 5 jobs—someone with whom I hope many readers will identify, other than that business of finding themselves in life-and-death situations. Oh, and good luck finding a time and place to have sex should the opportunity arise.”

Even though Florio covered her newspaper’s “cops and courts” beat for a number of years and learned a lot in the process, she still spent countless hours researching legal questions. The truth is, tons of research went into THE TRUTH OF IT ALL.

Another area that proved difficult was writing about the casual cruelty by some toward refugees.

“I’ve never understood how someone can deliberately set out to hurt people—not just with words, but to do real economic and physical damage—about whom they know nothing other than their race, ethnicity, or national origin,” she says. “Putting myself in the minds of those characters and trying to make them more than one-dimensional was tough.”

What was the most fun for Florio was returning to the manuscript “after thinking it would never see the light of day and realizing, hey, this is not bad. It had languished for more than a year, and it was exciting to see the good parts and the possibilities of bringing the rest up to snuff. I don’t think I’ve ever enjoyed revisions so much.

“THE TRUTH OF IT ALL was written immediately after Silent Hearts as another standalone, but did not initially find a publisher—and then the shutdown hit. In the meantime I was fortunate that Severn House accepted the proposal for the Nora Best books. I started working on those and more or less forgot about THE TRUTH OF IT ALL until my agent called with the news of a two-book offer, which makes for a bit of a scramble as I write its sequel and the third Nora Best book—a ‘problem’ for which I daily give thanks to the writing gods.

“I’m drafting the third book in the Nora Best series, tentatively titled Best Practices. As soon as I’ve completed the first draft, I’ll start on revisions to the sequel to THE TRUTH OF IT ALL, and then will turn my attention back to Best Practices, so as to have them both shipshape for their December deadlines for 2022 publication. Gulp. I’m already jotting down ideas as to sequels for each of these books, and am wildly enthusiastic about each.”

Recovering journalist Gwen Florio is the author of the Lola Wicks crime series—termed “gutsy” by the New York Times—and a standalone, Silent Hearts (Atria). A new series launched in 2020 with the publication of Best Laid Plans (Severn House) and continues this year with Best Kept Secrets. Also this year, a separate series featuring a young public defender launches in August with the publication of THE TRUTH OF IT ALL (Crooked Lane). Her first novel, Montana (The Permanent Press) won a Pinckley Prize for debut novel and a High Plains Book Award and was an International Thriller Award finalist. Florio, Rocky Mountain Fiction Writers’ 2018 Writer of the Year, lives in Missoula, Montana.

You Can Never Tell by Sarah Warburton