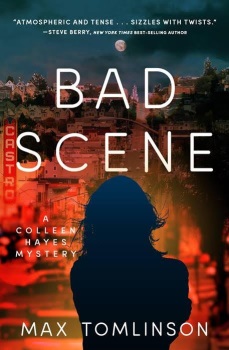 When PI and ex-con Colleen Hayes learns that a local neo-Nazi group is talking about shooting the mayor, she thinks it’s just another rumor—until her source, a humble street newspaper vendor, winds up in SF General, beaten to a pulp.

Then she discovers that her runaway daughter might have joined a shadowy religious group, building a church in South America near a volcano that is about to erupt. Death is the path to perfection according to the charismatic young preacher—and the date is fast approaching.

Colleen must find a way to stop her daughter from making the ultimate mistake before she—along with hundreds of others—lose their lives.

Character, as in Colleen Hayes, an ex-con working as an unlicensed PI in 1970s San Francisco. BAD SCENE is the third book in the series.

San Francisco in the late ’70s as setting and character in its own right.

Challenge: leveraging major events of 1978 San Francisco—Peoples Temple and the Mayor Moscone/Harvey Milk shootings—without being opportunistic and maintaining a level of respect for those that perished. This was done by creating fictional characters around the actual events.

Opportunity: same, as the historical dive creates a (hopefully) authentic story for the reader.

Explores and presents a fresh view of the recent history of a time and place (San Francisco) that resonates in noir fiction.

PI as protagonist: a female ex-con in a role that is hopefully fresh to the reader.

Patricia Highsmith: her conflicted protagonists that maintain the reader’s sympathy are utterly unique.

JP Donleavy: American author who wrote The Ginger Man – THE book that broke the mold on modern writing and picaresque characters.

Q: Do you think your protagonist was justified in committing the crime that sent her to prison?

Born in the wilds of San Francisco, with its rich literary history and public transport system teeming with characters suitable for crime novels, the stage was set for Max Tomlinson to become a mystery writer. His novels include Sendero (listed as one of the top 100 Indie novels of 2012 by Kirkus), Who Sings to The Dead, Lethal Dispatch, The Cain File (selected by Amazon’s Kindle Scout program), and the follow-up, The Darknet File. Max’s Colleen Hayes Mysteries of the ’70s, published by Oceanview, include Vanishing in the Haight (a USA Today Bestseller), Tie Die, and BAD SCENE, which releases 8/3/2021.

The August 2021 Edition of The Big Thrill