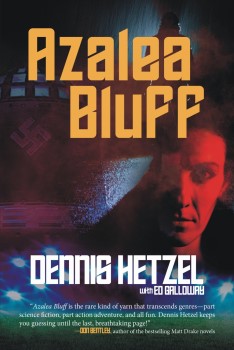 Olivia Claven lives in the Carolina beach community of Azalea Bluff. She’s trying to regroup, but a flooding tide of setbacks has destroyed her plans. The love of her life has died in a mysterious crash. Saddled with debt, she’s back in her parents’ house after losing multiple media jobs. The local news website she started could fail at any time, too.

One day she gets a tip that could turn things around. A mysterious object has crashed onto her high school’s football field. The authorities have sealed the area and cut communications, but she knows how to get close without being seen.

She gasps as she views the odd, bell-shaped object that sits on the 50-yard line. Then she vanishes.

As Olivia fights madness in captivity, her father starts a relentless search for answers, risking everything as he stumbles upon secrets buried in bizarre UFO stories and the rubble the Nazis left behind in the closing days of World War II.

Definitely the basic plot, though that had its challenges, too, as I dove into research. This book has an interesting back story as it started as an old-time radio drama written and produced by the late Ed Galloway, a well-known radio personality I met in Charlotte NC. After agreeing to see what I could do with Ed’s story as the scaffolding for a novel, a lot changed, including the main character, who became a millennial female, Olivia Claven, dealing with multiple setbacks. Olivia has had to go back to living in her childhood bedroom, which unfortunately describes what has happened to a number of 20- and 30-somethings. I also introduced or fleshed out other characters and moved the setting from the suburbs to a fictional North Carolina beach town that gave the book its title, AZALEA BLUFF.

I’m definitely not a millennial female, though I’m the father of one. Lindsay Hetzel, my daughter, helped in multiple ways. I wanted to make sure Olivia had an authentic voice, so I also used a number of highly capable female draft readers, including Carol Costello, known by many for her years at CNN and brilliant authors such as Stephanie Storey and Cheryl Reed. I am quite indebted to all the women who assisted me.

As for the opportunity, I’m a former journalist who believes in the importance of journalism to my core, so it breaks my heart to see what is happening to my profession, though some of the wounds are self-inflicted. While the book isn’t preachy at all, I hope the book helps people appreciate the dedication of so many bright young journalists who are just like Olivia Claven.

I also believe it will be as eye-opening to many readers as it was for me to learn more about the Nazis’ secret research activities at the end of World War II and some of the fascinating characters and incidents that are well documented. Type “Hans Kammler” or “Kecksburg, Pennsylvania” into your Google search bar, and you’ll see what I mean.

The timing for AZALEA BLUFF is excellent. This comes at a time when there has been more attention, not to mention legitimacy, regarding unidentified objects and related mysteries than ever in US history. I hope the book opens some eyes about how much the public has never been told about what Nazi scientists were doing for the Third Reich and, after they were captured, for us and probably the Soviets. There is a ton of thought-provoking stuff that gets revealed in the story as we learn more about why and how Olivia Claven vanished.

I learned in my first two books that I’m a genre-bender. Those books combined sports and political fiction and ultimately were about the prices paid to succeed at the highest level of those very public professions. Here we have a book that is part contemporary thriller and part historical mystery with a heavy dose of science fiction. I feel strongly that people should get outside their comfort zones, especially with books, so maybe that’s part of what I’ve been put here to do. If that makes it harder to put me in a genre bucket, I’m okay with that.

I thoroughly enjoyed framing my story around Olivia. Beyond the challenge of conveying her as an authentic person, I think millennials get a bum rap from their elders. They care, they’re more inclusive, and they’re inheriting a huge mess from the boomers (my generation), at least on the political stage. To the extent millennials are cynical and not as loyal to their employers, you have to ask yourself what they’ve experienced and observed as they’ve come of age. They have every right to feel that way.

It’s a long list, which I guess explains why I’ve written about sports, politics, and now a sci-fi historic mystery. Sci-fi and to some extent fantasy authors got me started as a voracious reader. Frank Herbert, Robert Heinlein, Isaac Asimov, Sherri Tepper, and Tolkien all come to mind. Contemporary thriller writers like Connelly, Turow, Coben, LeCarre, Preston-Child, and DeMille have all had impact. Connelly’s plots are crafted like diamonds, and I have a special affection for him because we were both newspaper police reporters early in our careers. DeMille gave me the inspiration to alternate between first-person and third-person in Season of Lies, and I think it worked well. Coben showed me that, yeah, you can blend sports with a thriller plot. Turow and LeCarre are writers whose best efforts should survive under the haughty definition of “literature.” In the military thriller world, I’m among many admirers of Vince Flynn. I did a review for BookTrib.com raving about Don Bentley, who just might be Flynn’s natural successor. On the non-fiction side, I’d count David Halberstam, Hunter Thompson, and Tom Wolfe as influences, and then there’s Bill Veeck, the late-great showman and owner of the Chicago White Sox. His “Veeck As In Wreck” tops my list as the best sports biography of all time. Ron Chernow’s biography of Ulysses S. Grant gave me chills as he showed the struggles this fundamentally good man faced as the goals of Reconstruction fell apart.

Q: Why do you write?

A: I believe we’re all given gifts, and I know what gifts I wasn’t given—like the great eye-hand coordination that the athletes I admired appear to have. I loved sports, and it was very frustrating to me. For example, I didn’t get picked to make a Little League team, even just to sit on the bench—a devastating moment for a little boy. But I found a way to channel it. When I was 15, I convinced the editor of our weekly paper in the Chicago suburb of Hoffman Estates to pay me, I think, 10 cents an inch to write about high school sports. Everything that has happened in my life flows from that decision, including meeting and making the friends who encouraged me to try a novel decades later. I think we’re here to use the gifts we’re given.

As I noted above, the book has as its foundation a radio drama created by Ed Galloway. Ed wasn’t involved in the day-to-day writing, but he was hugely supportive, even as I kept changing things. He died unexpectedly of a heart attack as I was wrapping up an early draft. His widow, Carolyn, has been awesome in her support of the project, which we all see now as a wonderful way to remember Ed and his life’s work. As I say in the author’s notes at the end of the book, as a radio guy, Ed would certainly have agreed that the show goes on.

Dennis Hetzel is an author, media consultant, and freelance journalist. His award-winning thrillers, Season of Lies and Killing the Curse, explored the prices paid to succeed at the highest levels of politics and sports. In earlier lives, he was a reporter, editor, publisher, college journalism professor, trade association executive, and lobbyist recognized nationally for his work on First Amendment issues. A Chicago native, he lives in Holden Beach, North Carolina. He also does book reviews for Windy City Writes in Chicago and BookTrib.com and plays bass and rhythm guitar in an Americana rock band, MoSun, still hoping that this musician thing works out when he grows up.