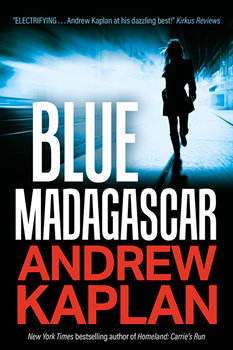 A candidate for US President, ahead in the polls and about to win the election, suddenly commits suicide. No one knows why. During a botched jewel heist on the French Riviera, a bystander is killed. This death triggers a worldwide hunt by intelligence agencies for something the dead man left behind—a secret so explosive they will let nothing get in their way.

Homeland Security Special Agent Casey Ramirez finds herself catapulted into a deadly cat-and-mouse chase across Europe to discover the dead man’s secret—a secret that threatens the foundations of American security—before it’s too late.

Author Andrew Kaplan is no stranger to the world of publishing, but BLUE MADAGASCAR is his first venture into the world of independent publishing. The New York Times bestselling author of the Scorpion and Homeland television series recently spent some time with The Big Thrill to talk about his new book.

Was it difficult writing an international thriller during a global pandemic?

I originally started the book before COVID-19 and did a big rewrite, editing, and prep for publication during the pandemic. In terms of subject matter and locale, COVID presented a challenge because I didn’t want the book to be about that. I needed the world to be as “normal” (whatever that means) as possible; people meeting in cafés, getting on planes, going to work in offices, etc. In terms of locales, LA, Paris, the French Riviera, Mexico, Panama, Greece, etc., they were all places I had either lived or knew pretty well, so that wasn’t an issue. I set the book in an unspecified very near-future election year—no sci-fi stuff, no tech whiz-bang—a world that is completely recognizable, just a tiny bit in the future. This enabled me to tap-dance around the subject of COVID by simply suggesting it had happened, was gone, and now we’re going to get on with what I thought was a pretty interesting story.

As for the way it affected the writing/rewriting, COVID may have helped. During that time, there weren’t the usual distractions of doing things, meeting friends, going to restaurants. Interaction on production, marketing, etc. was online, which is kind of how everyone does these things now anyway. As someone I worked with told me: “It’s Jeff Bezos’s and Mark Zuckerberg’s world. The rest of us just live in it.” 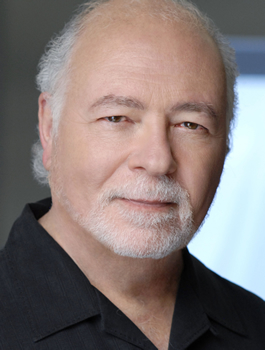 What did you find were the challenges and/or opportunities of writing a female protagonist in a thriller?

Interesting question. Of course, I’d had some practice with a female protagonist writing Carrie Mathison for Homeland. (Little fun factoid: Carrie Mathison’s middle name is Anne. I named her middle name after my wife, Anne.) Carrie was actually a more limited character because she had a mental illness, bipolar disorder. On the one hand, it made her more interesting and challenging to write, but on the other, a bit limited, because you want the reader to know what’s actually happening. Also, Carrie had certain tropes, which made her a bit predictable. For example, whenever she got in a jam, her play was always sex. To put it in sports terms, if Carrie was a football quarterback and the situation was third and long, Carrie’s play would be sex.

I wanted to create a female protagonist that was more multi-dimensional than Carrie, a real woman with faults, weaknesses, who was smart as hell. The book started not with plot, but with the character of Casey, her horrific, almost Dickensian childhood, and her quest to find her lost sister, Jessica. When I came up with her character, I was thrilled. I knew I was on to something. Then all I needed was a plot, a mission for her. Most female protagonists in the mystery/thriller genre are sleuths, which she is not. I wanted something different. Of course, BLUE MADAGASCAR straddles the two genres. Casey must solve a puzzle and a situation. The challenge in writing a female protagonist in an international thriller is twofold: women in that world—except for honey traps—tend to be in subordinate positions and/or taken less seriously. The genre invokes action and physicality. The way to deal with it, the way I dealt with it, was not to pretend those realities didn’t exist, but instead to make Casey, smart as she is and with all the shit she has going on, deal with it. That worked.

Many thrillers in this vein are written from a male protagonist’s point of view. What are your thoughts on writing a female protagonist versus a male?

First of all, men and women writers have been writing opposite-sex characters forever. Shakespeare wrote some pretty incredible female characters, and Jane Austen’s male characters are too spot-on for comfort.

As you noted, the thriller genre creates its own issues. Some of the tropes of the thriller are suspense, action, movement, physicality, expertise. Except for suspense, all of these suggest a male protagonist, such as my Scorpion, James Bond, Jack Reacher, Mitch Rapp, Scot Harvath, etc. Many male protagonists acquire their lethal skills and expertise in the military. For example, Scorpion is ex-Army Delta, Reacher is a six-foot-five ex-MP, Harvath an ex-Navy Seal. A female protagonist can’t rely on overpowering her opponents (even if you made her a super-duper karate expert). She has to use her wits—and in some cases, the negative female stereotype of sexuality; i.e., the schemer, the vixen, the seductress. But viewing her as untrustworthy or as a seductress again presents her from the male point of view.

I’ve always thought women are more interesting than men. Precisely because they spend their lives dealing with the male of the species, they have to use their wits and their emotional intelligence, often from a subordinate work position. By approaching it from that point of view, the female protagonist is actually more interesting. Unlike Reacher, she can’t outmuscle her opponent. She has to out-think him, which is what Casey does and what makes her such an interesting and formidable character—to me, more than Scorpion, Reacher, or Rapp. That said, because I’m a male writer, I can make mistakes. I ask my wife, women friends, and writers to rigorously critique my female characters to make sure I get their physical and emotional reality as real as possible.

Jessica, Casey’s sister, feels like she has a story to tell. Can we expect to see her again?

The short answer is, maybe. I structured BLUE MADAGASCAR so it could be the start of a series—and based on early reviews on NetGalley, Goodreads, and Amazon, readers really seem to be responding to it. For years, readers wanted me to expand Scorpion into a book series, but it took a very long time before I decided to do it. That won’t be the case with Casey, a character I love, and her equally impressive sister, Jessica. But I do have some other pretty interesting stories to tell.

Andrew Kaplan is the New York Times bestselling author of two spy thriller book series: “Scorpion” and “Homeland,” including the international phenomenon, Homeland: Carrie’s Run, the original prequel novel to the award-winning “Homeland” television series. His Homeland novel, Homeland: Saul’s Game, won the Scribe Best Novel of the Year award. His books have been translated into 22 languages. A former journalist, war correspondent, and business consultant, he covered events around the world and served in both the US Army and the Israeli Army during the Six-Day War. His standalone novels include the NY Times bestsellers Dragonfire, Hour of the Assassins, and War of the Raven, cited by the American Library Association as “one of the 100 Best Books ever written about World War Two.” His screenwriting career includes the James Bond film Goldeneye. His books are listed by Book Scrolling as among “The Top Spy & Espionage Books Of All-Time.”