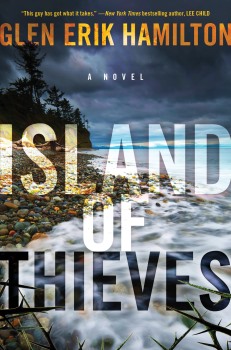 Expert thief Van Shaw is hired to evaluate the safeguards for the art collection of eccentric business magnate Sebastian Rohner. Then Rohner reveals to Van the real reason he’s been recruited: to prevent another professional burglar from stealing the art. Rohner wants to set a thief to catch a thief.

While questioning the bizarre nature of the job, Van accepts the lucrative offer and surveils the highly secure gallery wing of Rohner’s expansive island estate, only to stumble across the murdered body of one of the international summit’s honored guests on the rocky shore. Wary of Rohner’s true intentions, Van knows the homicide detectives on the case—and perhaps Rohner as well—think he’s the prime suspect and will turn his life upside down in their search for proof.

Van begins to hunt for the killer himself, but scrutiny only digs his hole deeper, as another of Rohner’s executives is killed, and the Seattle police find concrete evidence placing Van at the scene. With no other options, he goes on the run, alone and unaided. He’s hunted by the cops, the enraged Rohner, and by a pair of psychopathic hitmen who chase Van from one coast to the next. To clear his name, Van Shaw will have to uncover the hidden motive of corporate espionage at a global level, even with a band of killers on his tail, determined to add Van to their growing list of victims.

ISLAND OF THIEVES had an unusual start. Every book in the series before this one had grown from my musings on how the main character, former Army Ranger and once-and-future professional thief Van Shaw, needed to develop. But I’ve been fascinated by the private enclaves created by the extremely wealthy, especially when those estates serve as both a display of their status and as a place of business. Van has brushed shoulders with the elite before—and he has his opinions—but ISLAND OF THIEVES gave me a chance to enmesh him fully into that world and let him react to the kind of power and influence an international magnate like Sebastien Rohner wields. Power corrupts, and as much as Van kicks at authority, he may not be completely immune.

The biggest challenge for the book was the same faced by nearly everyone on earth: dealing with the pandemic. I couldn’t do my usual traveling to scout locations until deep into rewrites and had to rely on places I’d visited before or make up settings from whole cloth. Instead of letting that limit the scope of the book, I found it freeing. Briar Bay Island, the title location, is fictional but a construct of a few real islands in the San Juans and some estates owned by billionaires in the Northwest. I could get a little outrageous with the scope of it, although everything in the book has a basis in real places. Van travels all the way from Seattle to New York City in a desperate race in ISLAND OF THIEVES, and his travels were definitely me living vicariously through my main character.

All of the Van Shaw thrillers to date have been closer to mysteries in their structure. Adventure and action, sure, but seen through Van’s point of view so that the reader is discovering clues and experiencing new dangers along with him. With ISLAND OF THIEVES, I shifted to third person, which allowed me to set scenes outside the timeline when Van is involved, and to let the reader in on pitfalls and schemes that would be just around the corner for our hero. It also permits us to see Van through the eyes of other characters, which was a lot of fun to write. A tip of the hat to Lee Child on this one. Lee’s proven that a series can shift effectively between points of view in subsequent books and make that a bonus rather than a hurdle for fans.

Q: This one’s a bit of a cheat, because it sets up a personal announcement as well as an answer, but: What’s the biggest challenge of writing about Seattle and the Northwest?

A: With challenge comes opportunity. Everyone knows about the rain and the coffee culture and the Space Needle and the rain. Yes, I said rain twice; it really is that prevalent. But Seattle is also the fastest-growing city in the US—with prices to match—and one of the largest ports in North America. Despite its relaxed reputation, the Emerald City can be tense (blame the coffee). It’s progressive but also reactionary in the face of all the changes forced by the economy. Its identity is in flux; grunge music and Sleepless in Seattle and Frasier were more than a quarter-century ago. Amazon and other companies have bought and transformed entire sections of the city since. No one knows what Seattle will become in the next twenty-five years—boom or bust?—and that’s exciting.

And I’ll see it first hand. After sixteen years in Southern California, our family is moving back to Seattle, to live in the heart of the city. This is both to help the writing (in-person interviews can be a thing again, after COVID!) and because we’ve missed the Northwest and its oppressive-but-somehow-comforting gray skies.

Hamilton’s debut novel Past Crimes won the Anthony, Macavity, and Strand Magazine Critics Awards, and was also nominated for the Edgar®, Barry, and Nero Awards. Kirkus called Past Crimes “an exciting heir to the classic detective novel.” All of his subsequent books in the Van Shaw series have earned starred reviews from Publishers Weekly, Library Journal, and more, and have been published in North America, the United Kingdom, Ireland, Australia, Turkey, the Czech Republic, and Japan.

Glen grew up aboard a sailboat in Seattle, Washington, playing and occasionally finding trouble around the islands, marinas, and commercial docks of the Pacific Northwest. Whenever the boat drifted on calm seas, Glen would raid his parents’ bookshelves, passing the idle hours with Travis McGee, Spenser, and the labyrinthine plots of Patricia Highsmith and Fredrick Forsyth. Years later, Glen met his wife while both were performing in an Agatha Christie play. Prior to his fiction writing career, he worked in wireless telecom, the gaming industry, and non-profit healthcare.

Glen served as president of the Southern California chapter of Mystery Writers of America from 2018-2019 and is also a member of International Thriller Writers and Sisters in Crime. He lives near Los Angeles with his family and publicly acknowledges his addiction to Columbo.