Perfect Mom and Wife? Skilled Liar? Or Both? 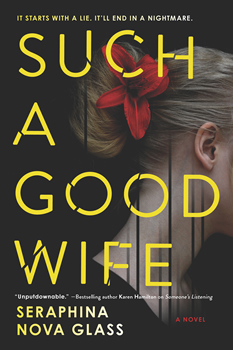 “Sometimes, the truth will not set you free, but do quite the opposite.”

So learns devoted wife and mother Melanie Hale in Seraphina Nova Glass’s newest thriller, SUCH A GOOD WIFE, in which she “creates a normal and relatable world and then turns it upside down.”

Mel is as close to perfect as a wife and mother can be. She’s raising two kids—13-year-old Rachel, who tests her with constant arm-crossing, eye-rolling, and annoyed sighing, and second-grader Ben, who’s autistic and neurodivergent—prone to meltdowns at the slightest change in routine. Mel also cares for Claire, her husband Collin’s mother, who suffers from lung cancer and dementia.

“You’re a saint,” Collin always tells her. Everyone knows Mel’s entire life is wrapped around her commitment to her family.

In order for Mel to have something to focus on that’s just her own, Collin convinces her to join a writers’ group at the local bookstore. “Write about your own life,” the workshop leader tells her. So Mel writes about Claire and the life that was robbed from her, and “about how I married the kindest man in the world, only to find that I almost never see him, and how my whole world revolved around behaviors, de-escalations, meltdowns, doctors, medicines.”

While at the writers’ group meeting, Mel notices the book reading happening on the other side of the store. Luke Ellison is a famous romance author, and although Mel doesn’t read romance, she wanders over and listens to him anyway. After, not wanting to be like the women fawning over him, she sits at the bar and orders wine. She’s surprised when Luke joins her.

Amid the drudgery of her daily life—a life until just recently she thought she loved—Mel can’t stop thinking about Luke. When she attends her next writers’ group meeting, he’s there in the bookstore. She’s both shocked and thrilled that he keeps looking her way.

Luke invites Mel for a drink at a bar across the street. What starts as an innocent conversation soon escalates into a sultry affair. Although guilt fills Mel, she’s appalled to realize she’s a good liar. The falsehoods roll so easily off her tongue that her husband doesn’t suspect a thing.

Although Mel’s brain insists that she must end the affair before her family finds out, the rest of her can’t stop. “I’ve created a kind of hell for myself. But just underneath the weight of my insurmountable shame, I feel the rush, the pleasure, the lust.”

That is, until she finds Luke dead at his house.

Mel must find out what happened before she’s implicated in his death. Was it murder? If so, she knows she’ll have to piece together clues that will lead to the killer. But what she discovers is even more threatening than she ever imagined. And Mel must confront the question: How far will she go to save her life as she knows it?

For SUCH A GOOD WIFE, Glass says she didn’t have a specific inspiration—more of a spark of an idea that she slowly sculpted into a story.

“I can’t say I know where ideas or inspiration come from. It’s never spontaneous,” she says. “I think a lot about plot, and I spend long, arduous stretches of time wondering about the snowball effect of an action a character might take, and how it would move the story forward. I ask myself a lot of ‘what if’ questions, and usually the answers to those questions form into the semblance of a story idea. If this sounds vague, it is. It’s a lot of chipping away at an amorphous blob of an idea and hoping it morphs into something interesting. “

It stuns Mel that she could turn into such a good liar so quickly. Glass explains that Mel’s “moment of weakness turned into betrayal. She lied by omission over and over, and then a domino effect was set into motion, and her attempt to cover her tracks went very wrong. I imagine this isn’t uncommon in real life. Probably not to this extreme, but you know… what a tangled web we weave.”

Glass says Mel’s descent into deceit could happen to any of us.

“If we can see ourselves in the shoes of the protagonist in this ordinary setting, maybe we can see ourselves going to extreme lengths to cover up lies, affairs, and even murder,” she says. “We can imagine we might do the same if put in the same traumatic or outrageous circumstance. This is what I like about domestic thrillers in particular—the realism and the relatability of the world and the story.”

Glass has a background in playwriting and screenwriting, which has contributed to her work as a novelist.

“Playwriting is like classical training in writing. You must hold your audience with dialogue. Nothing blows up, no car chases, no quick scene changes. That’s hard to do,” she says. “Screenwriting offers a little more freedom, but it’s still a collaborative art, and you hand your writing over to other people—directors, actors, costume designers, scenic designers, etc.—to interpret it the way you intended, which will never happen exactly the way you want. I found it helped me learn to let go of a project after writing it.

“I’ve developed a foundation for storytelling in a variety of mediums, but fiction is my favorite. Although there are also other reasons, I like the control! I loved the collaborative nature of play- and screenwriting, but there is something satisfying having just the reader/intended audience interpret your work with no middleman making changes. It’s gratifying in a different way.”

Glass is grateful that she’s found a place in publishing, especially in her favorite genre, and has some advice for other fiction writers.

“Just about every aspiring writer I’ve ever talked to thinks getting traditionally published is a pipedream and could never happen to them,” she says. “I was one of those people. However, I’m encouraged by this statistic: 97 percent of people who start a novel do not finish. Imagine what your odds are if you are the three percent who finish? That might not be encouraging to some, but it was for me. Just write the damn thing. Get the draft out of your brain and onto the page—get out of your own way! Everything after that is revision, but you finished a novel, and that’s a big deal, and not at all impossible.”