In World War II London, Espionage Shows Its Dark Side 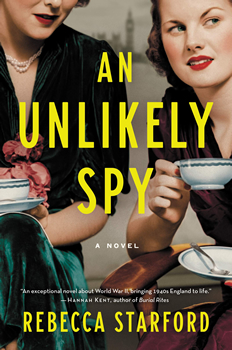 “You always did like art, didn’t you, Evelyn? And books. Clever as you were. You always thought you were so much cleverer than the rest of us. It didn’t quite turn out that way, did it?”

In Rebecca Starford’s AN UNLIKELY SPY, Evelyn Varley is about to find that out the hard way.

In 1939, with the war looming, Evelyn is recruited by MI5, first to transport classified material, then to infiltrate a group of Nazi sympathizers. She finds it exhilarating at first, and easy. As the scholarship girl at an exclusive boarding school, and then an outsider at Oxford, she’d long ago learned how to look, act, and talk like the others, to wear a disguise.

“Counterintelligence is about distraction, deception, but at its core is truth,” her mentor tells her. “You must make your subjects believe in you and your convictions. Authenticity is always the best method in espionage. Truth with just the lightest shade of dark.”

But nobody tells you what to do when the dark threatens to overtake everything else.

Drawn deeper and deeper into a world where truth and lies intertwine, she runs smack into the inescapable equation of the work she does, “that any small victory would always be at the expense of others,” and when those others turn out to include close friends, the price becomes frighteningly high. Her loyalties pushed to the breaking point, the decision she must make impossible, Evelyn will find out firsthand the physical and emotional toll of the life she has chosen.

“The problem is you’ve given over too much of yourself,” a colleague warns her. “You’ve got to keep that real part of you hidden away.”

But what if you can’t remember what that real part is?

AN UNLIKELY SPY is a deep psychological portrait of a woman on the brink, a powerful examination of the choices we make—and as gripping a World War II thriller as you’re likely to read this year. 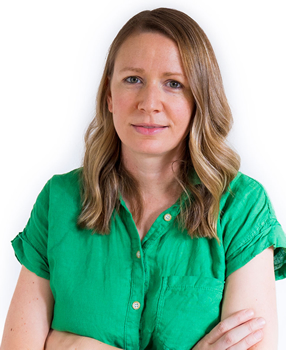 “I first started thinking about female spies many years ago,” says Rebecca Starford.  “I’ve always been drawn to the darker, ambiguous elements of female experience in my writing and reading, so a spy presented an intriguing figure for me to fictionalize: someone who must lie and be duplicitous, while at the same time garner the empathy and understanding of her readers. I think the more concrete shape of AN UNLIKELY SPY started to take form when I read an obituary for an Englishwoman who early into the war had been recruited into MI5, performed all kinds of acts of bravery, and then returned to the role of wife and mother after the war, never talking much about these experiences. There was such simple modesty about her wartime life—and it got me wondering how many other women had worked like she did for the intelligence service and have been forgotten.

“I undertook a lot of research, but I was mindful about how that research worked its way into the story.  I wanted the era, the milieus, the settings of the War Office, MI5 and elsewhere to feel really authentic, but I also needed some flexibility about shaping the story too to ensure I could eventually craft those twists in the narrative. I’ve visited London several times, but back in 2016 I went to the city for a specific research trip. I spent time at the National Archives, sifting through old transcripts of interrogations of suspected German spies that have been recently declassified, and I visited the Imperial War Museum. I walked the same streets of Mayfair and Bloomsbury that Evelyn does, and I went to Oxford to visit Somerville College where Evelyn was a student. I spent a few days in Lewes, too, the town in which Evelyn grew up. I find that kind of immersive research is foundational to my writing process. And I did a lot of reading, with Christopher Andrew’s The Defence of the Realm: The Authorized History of MI5 being especially important to how I wrote about Evelyn’s time at MI5.

“I was surprised to discover during my research that MI5 was fairly chaotic during the early months after the declaration of war. I had imagined wartime British intelligence to be sleek, sophisticated, and highly organized. But this wasn’t the case. The British government of the time had been slow to heed the intelligence service’s warnings about the German threat—and in particular their concerns about German spies operating in the UK. Because of this, MI5 hadn’t recruited enough staff before the outbreak of war, so by late 1939 they were playing catch-up. And recruitment also seemed a haphazard sort of process too—Joan Miller, the woman Evelyn Varley is loosely based on—joined MI5 largely on the recommendation of a well-connected family friend. Miller had no qualifications and no relevant experience. And though she initially joined MI5 in a junior role, she was soon involved  in high-stakes operations.”

AN UNLIKELY SPY is Starford’s first novel, but not her first book. She began with a memoir of bullying at a remote girls’ school in her native Australia. Was her depiction of Evelyn’s difficult school experiences informed by her own? “Not the specifics, but that snobbery, certainly, and the dominance of particular girls at that formative age. Like Evelyn, I was quite desperate to fit in when I was at school, and I did almost anything to be liked, which is something I look back on now with some regret and shame. But I think most of us can identify with that to some extent.”

She did use many of the same approaches for the two books: “I undertook similar kinds of research in terms of scene setting, for example. I travelled to the Australian bush boarding school campus where my memoir is set to remind myself of this quite specific place. I also tried to write the memoir in a ‘novelist’ way, treating myself very much as a character, creating that crucial backstory, motivation, and deeply personal insights into the events that shape the story. And I do think most fiction writers draw on personal feelings or emotions they’ve felt at particular times in their lives to enliven their narratives.”

She continues: “Most of the elements in the novel have come about incrementally as I underwent new drafts of the manuscript. I think it was Hemingway who said, ‘The only kind of writing is re-writing.’ My early drafts are scrappy. So as I continue work on the manuscript, I begin to get a sense about what is missing—whether it’s those bigger picture elements of the story, or the smaller details about character. Some of those aspects were already baked into my imagining of the story, but most of them came about by the writing process, revealing themselves when another element was adjusted or revised. I think of it as a bit of a jigsaw.”

It’s no surprise that she’s so thoughtful about the writing process. She’s a veteran editor and creative writing teacher, and the cofounder and publishing director of an arts and culture magazine called Kill Your Darlings. How have her experiences as an editor and teacher helped her with her own writing—and how did her experiences as a writer affect her as an editor?

“I hope I’ve become better at asking the right sort of questions of writers after being edited myself. These editorial conversations between writer and editor are always delicate and require sensitivity; every writer responds differently to the editing experience. I think having now published both a memoir and a novel that I have a greater understanding of the kind of emotional or psychological processes many writers might have undergone to bring their project to fruition, and so this insight better informs the kind of conversation we might end up having, and hopefully leads to positive outcomes in the ways their work may be improved.

“I think my experiences as an editor helped me understand that writing requires patience—and that novels require enormous development (at least, mine do!) from draft to draft. Although writing is a solitary practice, there is much collaboration to be had with editors, agents, and publishers, and I’ve been lucky enough to have worked with terrific professionals during my career. These conversations have helped me develop my manuscripts in ways that have dramatically improved them. These changes often require time and energy—and again, that’s when the patience comes in handy.

“It took me nearly four years to write AN UNLIKELY SPY. I realize that’s not an especially long time, but the writing process did have a couple of interruptions, most notably the birth of my son. I’m lucky enough to have a wonderful Australian agent and a wonderful US agent. When my Australian publisher had signed on to the project, my local agent later sent the manuscript to my now-US agent, and after he provided me with some really useful editorial feedback, he coordinated an auction in New York. By the end, I was delighted to sign with Helen Atsma at Ecco.”

What’s next for Starford? “It’s very early days, but I can say it’s a contemporary novel set in London, France, and Wales.”

If the initial reception of AN UNLIKELY SPY is any indication, she’ll have a lot of people waiting for it.

Hold Back The Night by Sean Lynch