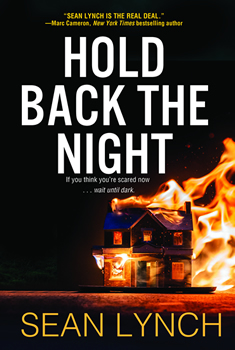 While the story is of course a work of fiction, Lynch says, “It was inspired by my own experiences with firestorms and the impact they have on those unfortunate enough to be touched by their devastation.”

In HOLD BACK THE NIGHT, that devastation is palpable. It begins with a spark. A simple act of carelessness that ignites the dry grass in the Sierra Nevadas. The flames spread within minutes, creating a sweeping wildfire down the mountain and engulfing a van from the local prison—giving two psychologically disturbed and extremely dangerous criminals a chance to escape.

In a bordering county, three very different women share one terrifying thing in common—they are all in the wrong place at the wrong time.

“All I intended to (humbly) do is re-invest readers in thrillers like Cape Fear and The Desperate Hours,” Lynch says. “And to do some justice to some of the real-life bad guys that I knew and was inspired to write about.”

In fact, the antagonist was inspired by a real-life predatory policeman Lynch knew by the name Craig Allen Peyer.

“People always ask how I come up with the plots and stories and characters, and I usually tell them that I have an active imagination,” he says. “But in truth, much of what I write is ‘inspired’ by people and events I have heard about, read about, or in many cases, personally experienced during my law enforcement career.”

While that can make the writing more authentic, Lynch admits it can also present a challenge.

“The biggest challenge was writing a story that would do justice to the material,” he says. “Frankly, the devastation from the firestorms is difficult to understate. I’m sure to those who’ve never experienced a wind-fueled California firestorm, the things I wrote will potentially seem quite over the top. Tragically, they are not.”

But as with any good thriller, Lynch is hopeful readers will find the pages gripping enough to power them through to the shocking climax.

“It’s my hope that HOLD BACK THE NIGHT will not so much re-invent the wheel, as perhaps re-align it,” he says. “Crime thrillers aren’t new, but each author’s unique spin is what makes them fresh.”

Sean Lynch grew up in Iowa, served in the Army as an enlisted infantryman, and spent three decades as a municipal police officer in the San Francisco Bay Area.

Learn more about Sean at www.SeanLynchBooks.com