A Heady Mix for a Thriller 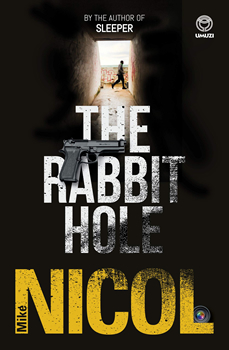 Mike Nicol is a talented South African novelist and stylist, and every one of his thrillers is a treat. He’s also a writing educator, and many of his masterclass students have had their work accepted for publication. If that weren’t enough, his blog WriteOnline offers interesting interviews, tips, and ideas for writers.

Nicol’s latest book, THE RABBIT HOLE, tells the story of a family-controlled civil engineering business that’s being lured into a corrupt contract for a massive infrastructure project in South Africa. The company is clean, and its CEO, Angela Amalfi, the daughter of its founder, wants it to stay that way. But she has two brothers. One is seriously psychotic, believing he’s a wolf on occasion and behaving like one. The other brother, Rej, is even worse. His father gave the top job to his sister, and he’s definitely not happy about that. Now he’s out to make serious money, and he has no difficulty eliminating anything or anyone in his way. Rej finds plenty of people interested in joining a gravy train, including a senior intelligence officer, a minister, and a CIA agent who clearly also has another agenda. The mysterious Voice seems to be on the side of the angels this time, but as always, her priorities and methods remain obscure as she pulls the strings in the background.

If this sounds to you like a heady mix for a thriller, you’re spot on. And that’s only the half of it.

This is the fourth thriller featuring Fish Pescado and Vicki Kahn, but the novels are essentially independent. (Though if you haven’t read the others, you’ll want to go back to them as soon as you’ve finished this one.)

PI Fish Pescado becomes involved through Angela—he investigated the unsolved murder of her husband when the police got nowhere some years before, and through another of his clients who is now dating her. Vicki gets involved because … Vicki always gets involved.

Nicol takes us deeper into his writing process and shares the inspiration for his latest thriller in this The Big Thrill interview.

Mike, government corruption is the backdrop to many of your thrillers, but in THE RABBIT HOLE, the focus is on the private sector. It takes two to tango, or in this case, it’s more like the corps de ballet. Was that change of perspective important, or was it more the totally dysfunctional Amalfi family you wanted to explore?

It seems to me that when a government is corrupt, the contagion spreads throughout the society, and so the private sector is not immune. In fact, in order to continue to do business, they probably need to bend the rules from time to time. Of course, this leads into gray areas. So although I’ve looked at the underhanded doings of the private sector in this novel, its unethical behavior is because of government corruption, cronyism, greed. The Amalfi family became a way of mirroring this distorted world. By concentrating on the tensions within the family, I was able to mirror what was going on in their business dealings.

I found Rej the most interesting Amalfi, and like all good psychopathic villains, early on he has a touch of appeal. How did you go about creating someone so evil and yet so convincing?

Rej rather wrote himself. Psychopaths are an interesting group: no empathy, no conscience, ease of lying, manipulative, completely self-obsessed, plotters who are forever way ahead of the rest of us. As I have close contact with a sociopath—the chaotic version of the narcissistic personality disorder—I have been able to observe these traits at first hand. For me the only way to characterize such people is to think of them as aliens. And so it was with Rej. The more the story developed, the more outrageous—evil is another word you could use—became his responses. This was in contrast to his brother, Ferdi, who has a form of a rare illness called clinical lycanthropy. Psychiatrists reckon the condition tends to occur along with other major psychiatric disorders such as schizophrenia, psychotic depression, or bipolar disorder. Ferdi, it seemed to me, called for empathy, whereas Rej belongs to a different order: an order given to chaos and destruction.

The contemporary spy novel, certainly one that is not set in the traditional Western conflicts (the spill over from Islamic militancy, the conflict between Israel and Palestine, and now renewed tensions with Russia), is a hybrid of crime and espionage. Clearly, in a country like South Africa, the government is as much a part of organized crime as are the poaching syndicates or the gangs controlled by drug lords. Often private enterprise finds itself responding to both sides in order to get business done. The result is a plethora of spies working for whomever. It was probably always like this to a degree, except in the traditional spy novel the spies are often supposed to be working for (or against) their country. There is a sense of a national identity. They are trying to protect democracy, Western ideals of freedom and rights of association and speech, or they believe in communism as a social option. Whichever way, they have an ideal to fight for or protect. The contemporary spy novel in South Africa doesn’t have that luxury of agents acting for a greater good. Our spy novels (not that there are many), it seems to me, are about dog-eat-dog situations. And so many of the conventions that shape a Western espionage novel have to be abandoned as we try to find other ways of reflecting the reality we face.

Fish and Vicki have an unstable relationship, but in THE RABBIT HOLE Vicki moves into Fish’s house, dumps gambling, goes back to her legal career, and announces she’s in it for the long haul. Then they start discovering sophisticated listening devices in the house, and the question is who is watching which one of them and why. Vicki laps it up. She enjoys her blond surfer boy, but it’s adrenaline she really lives for. She gets it gambling, spying, taking risks. Is that the backbone of her character?

I wanted an obsessive character, and Vicki came along and filled that role. She’s a junkie. But I also wanted her to have another side that desperately wanted a “normality”—if suburban living is normality. Of course, that type of normality is beyond both her and Fish. By virtue of their occupations they get involved in stuff that is risky and not at all suburban. So their relationship is unstable and no matter how much they might both want something different, the corruption and malfeasance roiling through society intervenes.

He drinks a lot of craft beers, for one thing. Other than that he doggedly goes about his life following the clues as they present themselves. Fish is persistent. He doesn’t give up. He stays on the job until the matters are resolved. Vicki is a challenge. She introduces the rabbit holes, and although Fish follows, he also brings them back to reality in the end.

A rabbit hole in the colloquial sense is defined as “a complexly bizarre or difficult state or situation conceived of as a hole into which one falls or descends.” This is a great title for the book! Was it the whole situation you had in mind or one particular character?

Throughout the Fish & Vicki series, up until his murder in Sleeper, there has been a spy handler—Henry Davidson—who quoted from Alice in Wonderland. It seemed a good idea to take that rabbit hole and develop it. So going down it is a matter of passing from one reality into another, and that other reality, as you pointed out, can be “complexly bizarre.” I hope it is.

Often the music a character is listening to features in the book. Recently, you posted on Facebook the tracks that the characters were listening to at some point. How important is music to you while you’re writing, and in developing your characters?

When I’m writing I can’t have music playing. Yet I can write anywhere—on planes, in airport departure lounges, on trains. Working on a newspaper years ago taught me to exclude the noise. As far as developing characters is concerned, well, there I’ve always felt music plays a role and can say a lot about how the character’s feeling, how the character views the world. Music also adds to a scene and can comment on a scene, and because these days, music is so much a part of our daily lives, incorporating it into a scene adds to the ambiance.

THE RABBIT HOLE has a stunning ending, and I know another Fish and Vicki book is in the pipeline. Will you tell us something about it? (I’m guessing your answer will be No!)

You guessed correctly, but I’d never be so rude as to simply say no. Instead I’ll say, I hope you don’t mind if I pass on this one.