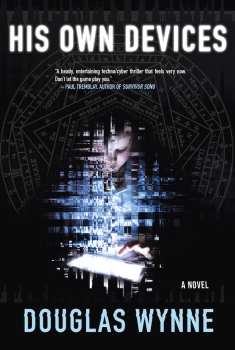 While her husband is deployed in Afghanistan, Jessica Ritter finds herself navigating the pitfalls of parenting on her own. That includes moderating her ten-year-old son’s screen time—an obsession that hits a fever pitch when YouTube sensation Rainbow Dave releases an addictive new iPad game. Gavin knows he isn’t supposed to keep secrets from his parents, but when his achievements in the game unlock personal messages from Dave instructing him to embark on real world mini-quests, he can’t resist.

What Jessica doesn’t suspect is that Rainbow Dave, the charismatic host of Scream Time, is the secret focus of a shadowy conspiracy hell-bent on sowing chaos with vast technological resources. Wired with a head full of unholy revelations and a crate full of dangerous devices, he’s on a mission to help his fans “level up” at a live event. Scream Time is coming to town, and it may be too late to stop a deadly game.

Douglas Wynne recently spent some time with The Big Thrill discussing his latest thriller, HIS OWN DEVICES:

The characters mostly came first, but they were immediately tied to plot. The premise of a psychotic YouTube star having a dangerous influence on a smart but lonely kid was something that came from watching my own young son become enamored with the whole Minecraft YouTube culture. In real life I think that’s a pretty harmless digital space, but as a thriller writer I have a natural habit of imagining the worst-case paranoid scenarios. So I knew the first two characters would be the kid and the charismatic YouTuber, but then other elements fell into place based on what I needed to enhance that relationship. I was attracted to the idea of it being a military family because the boy is somewhat isolated having moved to a new town, and his mother is overtaxed by essentially being a single parent while her husband is deployed, but that lifestyle also makes her strong and independent.

This is one of those cases where the problem became an opportunity. With a premise focused on tech and online culture, I knew it was a timely story but that the moment would eventually pass, so while I spent a few years revising and pitching the manuscript, I had a sense of urgency to get it published while it was still relevant. But that was eventually balanced out by seeing that the longer I worked on it, the more events in the news were moving toward the same themes. Russian psyops, open source domestic terrorism, and quasi-religious social media conspiracies are all more prevalent now than when I started writing. The book is set in 2016, at the beginning of the digital chaos we’re grappling with now, and knowing that enabled me to steer the final draft to make it feel like it’s setting the stage for everything we now know happens next.

I don’t know if it’s for me to say, but based on the early reviews I’d like to think my contribution is a high stakes techno-thriller that still manages to be deeply human and personal.

HIS OWN DEVICES is a thriller told from multiple points of view, but I hope it goes deeper than that because I was interested in exploring characters whose lives are different from mine. Even though my son inspired the kid at the center of the danger, a military family has a very different lifestyle from my own, and I relied on some generous friends to get those details right. On the other hand, I had to get inside the head of a fanatical terrorist who believes what he’s doing is ultimately good because he’s been literally brainwashed to view reality in a radically different way. I hope even he comes across as somewhat empathetic.

Douglas Wynne is the author of the thrillers The Devil of Echo Lake, Steel Breeze, and the SPECTRA Files trilogy. His short fiction has appeared in numerous anthologies, and his writing workshops have been featured at genre conventions and schools throughout New England. He lives in Massachusetts with his wife and son and a houseful of animals.