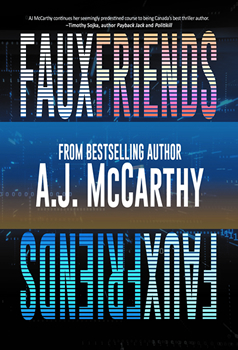 Fiction writing was not the focus of Neil Armstrong’s thoughts when he said, “Mystery creates wonder and wonder is the basis of man’s desire to understand.”

Yet his sagacious words also admit thriller writers into their sovereign space—thriller writers stoke wonder through entertainment, and enhance our understanding of the world we live in. The author of FAUX FRIENDS—A. J. McCarthy—is one such writer, who Timothy Sojka, author of Payback Jack is convinced  “… continues her seemingly predestined course to being Canada’s best thriller author.”

One of the reasons is FAUX FRIENDS.

Chantal Pouliot of the Quebec police force is relegated to mind-numbing desk duty because of a case that went wrong six months earlier. She hopes the white-collar cyber-crime case that comes her way will be the break she needs to retrieve her undercover detective status. The downside is having to collaborate with Quebec Police rivals, the Royal Canadian Mounted Police (RCMP), whose team will join her in Quebec City.

The safe, tedious job she envisioned swiftly becomes a murder case. Investigating a possible link to organized crime, Chantal is thrown back into the life she wanted. And how!

Jeff Lafond, from McCarthy’s Cold Betrayal, and Chantal’s friend and ex-partner, is by her side once again.

But somebody is playing games with them, and that person is aware of her past. Chantal feels compelled to question the loyalty of the investigating team. Events are being spun on the lives of innocents towards an endgame that can only be guessed at. And the overlying question is — how many people will the killer slaughter to achieve it?

In Cold Betrayal, Chantal had been captured and severely beaten by a drug lord’s thugs. Since then, she has been grappling with the resulting psychological effects and has to clearly overcome them before being able to resume her active duties as a homicide detective.

Author of five published mystery-suspense novels, A.J. McCarthy’s search for new ideas is centered on characters, which she often retrieves close to home. Some of her friends and family have become wary of identifying themselves in her novels while others, more adventurous, offer up ideas and even recommend certain family members. Behind her studious façade, few among her entourage can ever guess what her active brain is really computing.

McCarthy is a member of Crime Writers of Canada, Sisters in Crime, and International Thriller Writers. When she isn’t writing, chances are she’s reading.

In FAUX FRIENDS, McCarthy says, “My protagonist took shape first. Chantal was a secondary character in a Cold Betrayal, and I wanted her to be the star of this one. I built the plot around her characteristics and her backstory. The setting naturally followed its course from the first book.”

Yet, developing character was neither the major challenge nor the opportunity.

Both came from different directions.

“My biggest challenge,” McCarthy says, “was trying to come across as knowing something about cybercrime. I still don’t know if I succeeded. Only the reviews will tell.

“The biggest opportunity lay in creating a spin-off from what was originally intended as a standalone, one-time-only novel.”

And all that came together because she made it happen.

She started writing “almost 20 years ago: my passion for reading led me to try my hand at writing. I fell in love with it immediately and haven’t stopped since.”

McCarthy candidly acknowledges the wide-ranging influence of other authors on her writing. “I think almost every book I read influences my writing, either by inspiring me to do better, or by teaching me what not to do. That being said, in my genre, I was influenced early in my life by Agatha Christie and Sidney Sheldon. From there, I read many different mystery/thriller writers like David Baldacci, Harlen Coben, Janet Evanovich, Lisa Jackson (I could go on and on), and learned and appreciated the many different styles, without one being better than the other. Their differences are what keeps the genre so interesting.”

McCarthy and her husband live in a small town north of Quebec City.

One of her daughters and a granddaughter live nearby, whereas the other one is in Vancouver. Mainly desk-bound as the vice president of finance for a manufacturing company, McCarthy seeks a “restful, calm spot” to write.

“My preferred place is in a comfortable chair, with my laptop, a view of the backyard, and a table beside me for a cup of tea and my notes. I like to call it the bistro,” she says. “On nice days, I move to a shaded spot on the deck where I can enjoy fresh air and the peace of the outdoors.”

The rest of her time is spent in “activities related to writing,” traveling with her husband “as often as possible and spending time with friends and family.” The pandemic has, of course, curtailed travel so “without travel or a social life, I have more time for writing. I’ve taken up vegetable gardening, starting my plants from seeds and looking forward to the final product. I also love to spend whatever time I can with my daughter and little granddaughter… no day would be complete without reading.”

While devoting time to supporting Indie writers, “a tough, persistent group” among whom McCarthy has “discovered a wealth of talent,” she is also crafting a follow-up novel to Sins of the Fathers. It is also sure to be populated by memorable characters interacting within an eventful plot to provide thought-provoking themes.

As an author of five published mystery suspense novels, A.J. McCarthy is always on the lookout for new ideas. Her friends and family are cautious, concerned they may become a victim in her next novel. Those who are more adventurous offer up ideas and are willing to sacrifice certain family members for the cause. A.J. bides her time, waiting for the right moment and the perfect victim. She hides behind a quiet, accountant-like façade, and few know what she’s really thinking.

She’s a member of Crime Writers of Canada, Sisters in Crime, and International Thriller Writers. When she isn’t writing, chances are she is reading.

A Flood of Posies by Tiffany Meuret