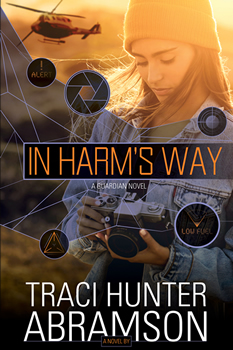 IN HARM’S WAY is the fifth book in the Guardian series and Traci Hunter Abramson continues to deliver thrilling adventure and spine-tingling suspense combined with a touch of romance. The main male character, Troy, aka Ghost, has appeared in prior books, but IN HARM’S WAY finds him on assignment on a remote private island where he anticipates working alone for a year. Unfortunately, that plan goes out the window when the island owner’s sister, Jocelyn, unexpectedly shows up and refuses to leave.

Jocelyn and Troy, who is known to Jocelyn as Ty, begin to form a reluctant friendship which slowly turns into more. When someone starts targeting potential US presidential candidates, Troy is called into action. It becomes more and more difficult for him to keep his identity and career a secret, and Jocelyn is no dummy—she knows something is up. Once the danger makes its way onto the island, Jocelyn and Troy have to stop keeping secrets and work together to save their lives.

IN HARM’S WAY is a nice blend of adventure and suspense with some lighthearted moments thrown in. Both characters are exceedingly stubborn and give as good as they get. Although, the book is part of a series, I had no trouble keeping up with the plot.

In this interview with The Big Thrill, Abramson shares a bit about how her former career with the CIA inspires her characters and what her writer’s life is like.

I enjoyed reading IN HARM’S WAY. The plot of the book revolves around a super-secret governmental taskforce. I know you worked for the CIA before turning to writing. How much of the Guardian organization is taken from your personal work experience?

So glad you enjoyed the book. The Guardian organization I created in this one really stems from little snippets of life that happened when I was working with the CIA. I pulled elements from people I worked with and situations I witnessed.

I was also fortunate to spend time working with the CIA’s liaison group in which I associated with other intelligence agencies as well as military organizations. Working so hard to make sure communication flowed freely and then experiencing 9/11 when those communication lines broke down really brought home how important it is for intelligence operatives to work with the same ultimate goal in mind: to protect our country. The Guardian program is my fictional version of that concept.

I grew up just outside of Washington, DC so I’ve had a first row seat to quite a few political scandals. The villain in IN HARM’S WAY is swinging for the fences scandal-wise, and it put me in mind of several older classic thrillers centered around DC scandals. Why and how did you decide to focus the plot around a political coup?

I often draw inspiration from what’s happening around me. When I started this one, the rumors of Trump being in league with the Russians were swirling. Whether they were true or not, those rumors planted a seed. What if a presidential candidate was being manipulated by a foreign government? Russia was an easy one for me to use since I worked in the CIA as the Cold War was ending, and I had a relatively high awareness of that particular country.

You are a prolific author of romantic suspense and thrillers. How do you keep each new story fresh and interesting? Have you ever had to deal with writer’s block and, if so, how did you overcome it?

Trying to keep things fresh can be a challenge. I am a discover writer, which does work to my advantage. Since I don’t follow an outline or a particular formula, my stories unfold at different paces with various suspense elements coming into play at unexpected times. I often don’t know who my bad guys are until I’m well into the book. Since I’m guessing what’s going to happen, that usually leaves the readers guessing too.

As for writer’s block, I don’t really experience that in a traditional sense. I sometimes have a writer’s slow-down when I struggle to uncover what my villains are doing and why. My typical method to get past that is to get on the treadmill and think through the possibilities until the story forms. If that doesn’t work, I talk out ideas with either my editor or another author. I’ve also been known to jump to a different project for a bit while the plot simmers. As long as I keep writing, eventually the answers will be revealed.

You’ve written quite a few series, but you also write standalone novels.  Do you find one type of writing easier than the other? Do you enjoy writing series more than stand-alone novels or vice versa?

They both have their advantages and disadvantages, but I do prefer series. For one thing, I already have a fully developed cast of characters who already have names and personalities. My favorite method is to write companion novels, so each one feels new and fresh, but the secondary characters are old friends I get to visit. My readers have enjoyed that as well, but I also love that people can pick up any of my books and read it as a standalone without getting lost.

We already know you worked with the CIA, but could you tell us more about your journey to becoming a multi-published author?

When I left the agency, it was primarily so I could stay home and raise my own children. Writing was a hobby I loved, one that no one knew about. I was a true closet writer. Not even my husband knew I was writing novels.

My first published novel took me seven years to write. I trusted only my sister-in-law, Rebecca, to read it. Patiently she guided me on my journey from storyteller to writer. I submitted that book directly to a publisher. The editor told me that she enjoyed the story, but that the characters needed to be deeper. I spent a year revising the book and resubmitted. A month later, I received the call that my book was accepted. Good thing I was sitting down!

I expanded that first novel into a trilogy, and then created a spin-off series from it. I think most of my success has come from treating my writing like a real career that required a commitment every day. I work five to six days a week. When my children were young, I wrote when my kids were napping. Then I learned to draft while sitting on the sidelines of soccer fields and on the deck of the swimming pool. When I struggle with what I need to accomplish to meet a deadline, I ask myself the question, “Do you want to be a writer or not?” The answer is always yes, and it forces me back into action. I want tomorrow’s version of myself to be pleased with how I spent today.

What is your writing day like? Do you have a set routine? A place that you like to write?

It has changed a lot over the years, but now I start in the morning, around 6:30, and get on my exercise bike, which has a desk attached to it. I write for 45 minutes to an hour there. Then I move to the treadmill in the basement and write for another hour. (I use an old-fashioned word processor—Alphasmart Neo—which fits on my treadmill so I can type while I walk. That usually gives me at least 1,000 to 1,200 words of my 1,500 to 2,000 word goal for the day. I usually take a break and do some marketing while I drink my morning smoothie and get ready for the day. Then I do another writing session sometime in the afternoon or evening to meet my word count goal.

Truly, my favorite place to write is on the treadmill, but after about an hour, I do need to change things up. I also avoid writing on my laptop because it’s too easy to get distracted by activities that have nothing to do with creating the next chapter. And I should clarify that I’m not walking that fast on the treadmill. My creative process just flows better when I’m moving.

Do you have any wisdom or advice for aspiring writers?

First, find someone you trust who can give you useful, honest feedback. My sister-in-law who taught me to write was as instrumental in my success as any natural gift I may have been blessed with.

Second, write your way. Everyone has a different process, and it may change from one moment to the next. Don’t focus on what others are doing. Focus on your story, on your craft, and on your future. You don’t need to walk in someone else’s shoes. Learn to love walking in your own.

Right now I’m writing a Navy SEALs suspense/thriller that spins off of my fall release, Redemption. I’m in that stage of “what are the bad guys up to?” Maybe it’s time to (fictionally) blow something up so they’ll start talking to me again.

Traci Hunter Abramson was born in Arizona, where she lived until moving to Venezuela for a study-abroad program. After graduating from Brigham Young University, she worked for the Central Intelligence Agency, eventually resigning in order to raise her family. She credits the CIA with giving her a wealth of ideas as well as the skills needed to survive her children’s teenage years. She loves to travel and enjoys coaching her local high school swim team. She has written more than thirty bestselling novels and is a seven-time Whitney Award winner, including 2017 and 2019 Best Novel of the Year.

The June 2021 Edition of The Big Thrill

Four Cuts Too Many by Debra H. Goldstein