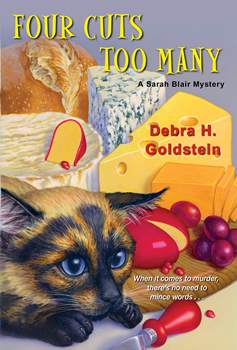 Sarah Blair gets an education in slicing and dicing when someone in culinary school serves up a main corpse in Wheaton, Alabama.

Sarah Blair, who finds being in the kitchen more frightening than murder, has no desire to learn knife skills from her friend, sous chef and adjunct instructor Grace Winston, but when Grace’s department chair is found dead with one of Grace’s knives in his neck, Sarah is forced to sharpen her own skills to uncover the elusive killer.

Debra Goldstein recently spent some time with The Big Thrill discussing her latest mystery, FOUR CUTS TOO MANY:

When a reader finishes FOUR CUTS TOO MANY, I want them to have enjoyed their reading experience, to have become engaged by Sarah Blair and her family and friends (not to mention RahRah, her Siamese cat), and to subconsciously have absorbed the social dynamics of academia and issues involved with economic development in small towns.

The biggest challenge and opportunity was incorporating diversity as a main story line balanced against the cozy atmosphere of a small Southern town.

Because FOUR CUTS TOO MANY is the fourth book in the Sarah Blair series, I had feared that there might be a staleness in the characters and Wheaton, the featured small town, but it proved to be anything but that. Rather, the evolution of the characters resulted in an expansion of my understanding of them and the town—and opened new avenues for the reader in a way that is most engaging.

The subplot involves an LGBTQ theme and characters, which is a contrast to what readers might expect in a cozy set in a small Southern town.

Damned if You Do, Damned if You Don’t—Marjorie K. Osterman and Portraits—Cynthia Freeman taught me about telling a story through characters who evoke emotions in the reader. In the mystery world, I’ve been influenced by Carolyn Hart, Valerie Burns, Hank Phillippi Ryan, Lori Rader Day, Hallie Ephron, Linda Rodriguez, and many many more.

Why did you deviate from the cozy formula we often hear about in writing the Sarah Blair books?

Because I don’t like cooking, baking, or crafts. I didn’t want to write a traditional cozy, so I created a protagonist who is more afraid of the kitchen than murder. I went a step further outside the formula by adding characters and underlying themes that consciously and subconsciously encourage readers to think about social issues and diversity.

Judge Debra H. Goldstein writes Kensington’s Sarah Blair mystery series (FOUR CUTS TOO MANY, Three Treats Too Many, Two Bites Too Many, One Taste Too Many). She also authored Should Have Played Poker and IPPY Award winning Maze in Blue. Her short stories and novels have been named as Agatha, Anthony, Derringer, and Silver Falchion finalists. Debra serves on the national board of Mystery Writers of America and is president of SEMWA. She previously was on Sisters in Crime’s national board and president of SinC’s Guppy Chapter.