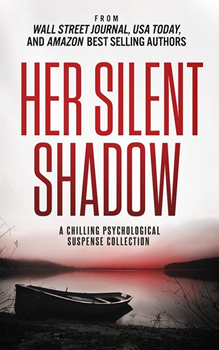 Thirteen original psychological thrillers including ONE by Eric J. Gates:

A serial killer is operating in California, but one like no other. The Bureau of Investigation has no clues to the killer’s identity, the victims appear chosen at random, yet one investigator is convinced there’s a connection to the Bureau itself.

No one is safe.
Obsession, abduction, and murder are the order of the day.
She senses the impending danger with nowhere to hide. Fear has frozen her, sapped her of her will.

Then she hears something…
Is there a killer on the loose?
Someone savoring the moments in their mind …
Planning, Scheming, Plotting to kill.

Is there a serial killer lurking?
Will she be his first victim?

The Big Thrill caught up to award-winning author Eric J. Gates for a quick chat about his latest novel, ONE, featured in the Her Silent Shadow box set:

Although the tale is strongly based on real medical conditions, though extremely rare in their occurrence as described, the medical terminology and description of the anomalies is kept to a minimum so the reader can constantly be surprised by the many twists the tale takes. The last two pages will make them question every single aspect of the tale they have just read!

There are many topical aspects of the relationship between twins that have been repeated constantly in books, movies, magazines and the press. However, nothing will prepare the reader for ONE. It’s a tale where they will be asked to make a decision, and it’s probably the most difficult task they have ever been given.

ONE is based upon a series of extremely rare medical conditions that may, at first, seem too fantastic to be anything other than the product of a thriller writer’s imagination. You would be wrong. Each of the conditions on their own are notable with far-reaching consequences. What could happen if they all manifested at the same time, though?

Do the ends justify the means, even if they include murder?

I challenge the readers on a moral and ethical level with my tale ONE. You can read it as a simple tale of law enforcement chasing an unusual serial killer, but you won’t… the presentation of the story, its cast of characters, and their unique interrelationship will have you discussing the most basic of questions.

Multiple award-winning author Eric J. Gates has had a curious life filled with the stuff of thriller novels. Writing operating systems for supercomputers, cracking cryptographic codes under extreme pressure using only paper and pen, and teaching cyber warfare to spies are just a few of the moments he’s willing to recall. He is an ex-international consultant who has traveled extensively worldwide, speaks several languages, and has had articles and papers published in technical magazines in six different countries, as well as radio and TV spots. His specialty, information technology security, has brought him into contact with the military and intelligence communities on numerous occasions.

He is also an expert martial artist, holding 14 black belt degrees in distinct disciplines. He has taught his skills to police and military personnel as well as to the public.

Eagles Over Britain by Lee Jackson