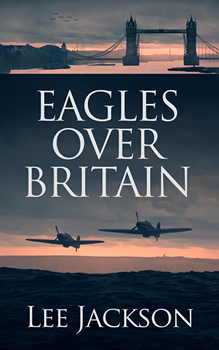 As WWII rages, Britain fights back, not just in the skies, but also with technology. From Bletchley Park to advances in radar, the race is on to thwart Nazi Germany. That’s the setting for Lee Jackson’s latest historical novel, EAGLES OVER BRITAIN.

The author, a former Army officer, recently took some time out from his busy writing schedule to answer some questions about inspiration, research, and the writing craft.

Many people have become aware of the fact that Bletchley Park and its code-breaking abilities north of London were very closely guarded WWII secrets. At the time, most who knew about them thought them to be Great Britain’s greatest military secrets. What is little known and I learned during my research is that Hitler was much closer to acquiring an atomic bomb than generally thought. That such was the case had been discerned by British intelligence long before hostilities began, and Roosevelt entered into cooperation with England through Churchill and the king more than two years before Japan struck at Pearl Harbor.

What draws you to write about WWII? Any personal connections such as a relative who served?

I’ve always been intrigued with WWII and thought I knew it reasonably well—as a cadet at West Point, we studied the major battles. I have to credit my publisher for nudging me to write about the war, which caused me to research it in much more depth, and now, having researched three books on the subject and completed two, After Dunkirk (out now), EAGLES OVER BRITAIN (due out in May), and Turning The Storm (due to the editor in June), I’m hooked. I’ve learned much about the unsung heroes without whose efforts the Allies would have lost, and world history since then would have turned out much differently, and tragically so.

I’ve been called a “pantser,” meaning that I write by the seat of my pants, but that doesn’t bother me. I don’t do extensive outlining. I start writing when I know the beginning and end of the story. My characters tell me their own parts of it and introduce me to new and peripheral characters along the way without whom the tale would not be complete. The actual history provides the timeline, and what I must discover is what parts of it and which characters fit into a seamless story. I know many terrific writers who outline, and my hat’s off to them because I’ve tried the method and found it above my ability. So I do the best I can and comfort myself with the thought that Mark Twain, among others, built decent reputations without extensive outlines. 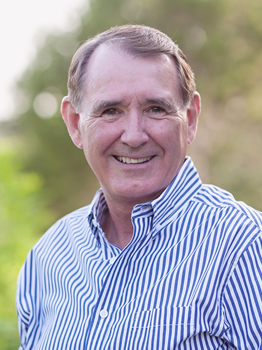 Tell us something about your writing schedule and workspace. Do you have to work at a desk, on the sofa, or at the local coffee shop—when there’s not a pandemic going on?

I’m usually an early riser, often at 4:30, seldom after 6, and I start right in with work. I admit to being not as methodical as I should. I start right into writing activities—which includes much research, and I stop when my brain ceases to function. I try not to let distractions get in the way, but as a grandfather who dotes on his children and their children, that is often difficult. My current goal is 2200 words per day. That will get me to the end of the story with a month to spare for beta-readers, re-writes, etc. before turning the manuscript over to the editors. If I’m having difficulty reaching that goal on any given day, I’ll push myself, but I’m usually driven to complete a scene, so often I’ve gone well above that number of words. Two weeks ago, I started at 4 a.m. and finished at 7 p.m., and had written nearly 5,000 words. That sounds impressive, but the next two days I was braindead, so I’m not sure the trade-off in productivity was there.

I use a laptop, so I can write anywhere, and do sometimes work on my front porch or back deck, or wherever else the spirit moves me, but usually I work on a recliner with a raised laptop desk that has electrical hookups. Sometimes I even stand at my bar and work there.

Can you tell us a bit about your favorite writers? What is something that they do really well?

Two of my favorite authors are Robert Ludlum and Alistair McLean. I remember reading an interview with Ludlum in which he said something along the lines of, “My characters are human. When punched, they reel. When cut, they bleed.” I’ve never forgotten that, and so when I write, I try for my characters to act as normal people would, given their character traits, training, and sets of circumstances. I say that with all due respect to Ian Fleming of James Bond 007 fame.

I’ve gained an even greater appreciation for that author as a result of my WWII research, having learned of his actual involvement in British intelligence and the profundity and improbability of methods and gadgets that became reality during the war as a result of necessity, tenacity, and ingenuity. Two quick examples come to mind: POWs learned to send intelligence back to London via encoded messages sent via the Red Cross despite German censors; and British intelligence contracted with the producers of the Monopoly board game to hide non-rustling silk escape maps between the top and bottom of the game board to be delivered to the appropriate POW camps, also via the Red Cross.

The lesson I learned from Alistair McLean was one I’ve seen echoed by other authors who write with a historical perspective, and that is to be accurate to the degree possible. I read McLean’s novel Siege of the Villa Lipp many years ago, and at the end of it, I could not immediately determine for sure if the story was fiction or non-fiction. No internet in those days. Stories like Ben Hur have a similar characteristic except that we know there was no one around to write up such a saga at the time. But the aura of sensing that the story could be true in every detail is still present, and that’s what I hope to accomplish when I write my books. From my perspective, among the most enjoyable compliments I’ve received include comments from readers stating that they were left wondering if they had read a true story or one that came from my imagination. I use fictional characters to bind together a larger story involving real characters and events, so in actuality, my stories come from both truth and fiction.

Lee Jackson grew up in Morocco. He is a former US Army infantry officer, a graduate of West Point, and a former civilian intelligence supervisor with the Department of the Army. He served tours in Iraq and Afghanistan amounting to 38 months split between the two countries. He lives and works with his wife in Texas.