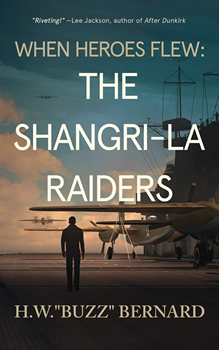 In the fight against Imperial Japan, the early months of 1942 were some of the bleakest and most uncertain. The Japanese had already pummeled the United States with their devastating surprise attack on Pearl Harbor. In swift order, outposts from the Philippines to Guam quickly fell to the Rising Sun flag. Rumors flew—was even the West Coast of the United States vulnerable?

That’s where the story of the Doolittle raid comes in, as told in H. W. “Buzz” Bernard’s newest WWII novel, THE SHANGRI-LA RAIDERS, the second installment of the author’s When Heroes Flew WWII historical fiction series.

The novel was inspired by the true story of Lieutenant Colonel Jimmy Doolittle’s raid on Japan in 1942. The raid provided an incredible boost to American morale, considering that the extraordinary victory at the Battle of Midway had not taken place yet. (The meat-grinder of Guadalcanal was still to come.)

In this case, the author set himself a tough task in that the real-life story of the Doolittle raid is so incredible that it needs no fictional embellishments. In April 1942, after months of planning and training, a squadron of 16 B-25 Mitchell bombers did the impossible and hit back at the heart of Japan, dropping bombs on Tokyo.

The bombers launched from an aircraft carrier and didn’t have the fuel to return—it was essentially a one-way trip. Any surviving aircraft were expected to land in China (which was at war with Japan), and the crews would have to make their way home as best they could.

Incredibly, 80 young men signed on for this apparent one-way mission. 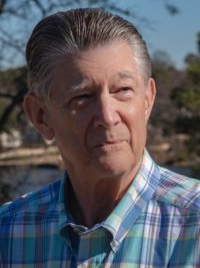 “The novel follows an American bomber crew through its secretive training, a harrowing raid on Japan, and finally on its desperate journey through occupied China to Chungking, the seat of the country’s wartime government,” Bernard says.

“The crew, along with an American missionary’s daughter whom they’ve rescued, must evade the Japanese occupiers every step of the way. And amidst all the horror and turmoil of war, a romance blossoms between the rescued woman and the crew’s pilot.”

Right away, readers are introduced to the crew of one of these bombers. Through their eyes, the story comes to life.

The story is told largely through the first-person narrator, First Lieutenant Ray Howzer, better known as “Boss.” For Boss, training for the mission seems to be a piece of cake (never mind a feet-on-the-brakes, drag-race approach to getting bombers off the ground). What really sends Boss reaching for his parachute is his relationship with women—or lack thereof. Readers will be amused by the subplot of a daring young officer who takes air maneuvers in stride but can’t seem to get his V-card punched. Anyone who has read William Manchester’s excellent wartime memoir, Goodbye, Darkness, will recall a similar obsession shared by many young men with a limited life expectancy.

Whether it’s sharing drinks at the bar or preparing for the mission, this interaction between the young men—and their personal challenges—are where this novel really shines. Bernard gets it right down to their 1940s vernacular, the hit songs, and the flyboys’ penchant for brown liquors.

Bringing new life to a wartime event depicted in well-known films such as Thirty Seconds Over Tokyo (1944) or even briefly in Midway (2019) wasn’t always easy.

“Since this is historical fiction set against a well-known event, the plot and setting were predetermined. Fictional characters who would fit into the event and carry the story then had to be developed,” Bernard says. “The biggest challenge was getting the historical details right. Different sources sometimes present differing ‘facts.’ Getting things right is like trying to put a jigsaw puzzle together when some of the pieces just aren’t going to fit.”

The author’s quandary will be familiar to any writer (or reader) of historical fiction. Which version of events is the right one?

“The biggest opportunity is to bring to life little-known historical details that make a well-known story even more robust,” he says.

He continues, “Using one B-25 bomber crew, it illuminates on a very personal level the stunning courage of the men who flew the first mission of WWII to strike back directly at the Japanese Empire after Pearl Harbor. The actual dropping of bombs on Japan wasn’t the most daunting part of the Doolittle Raid. It was what came afterward as all the planes but one crashed or crash landed in China.”

Much of the realistic nature of the story comes from the author’s own familiarity with aircraft. Although he is not a pilot, he has flown as a meteorologist on a “Hurricane Hunter” plane. For his research, he did take a trip on a WWII-era B-24 in the skies of South Carolina. He says the experience was not only amazing, but helped him as a writer to get the smells, sounds, and sights just right.

“I do try to get it technically correct,” he says, explaining that he has some pilot friends look over his writing. “I want it to be real.”

In our high-tech world, it’s hard to grasp the challenges of piloting a WWII-era bomber when the world was still analog and controls were manual. There was a compass, but there was no GPS system to provide instant positioning. As even more of a challenge, planes flew low to the target rather than using the high-altitude bombing they were designed for.

“A lot of this stuff turned out to be seat of the pants,” Bernard says, noting that skill and practice helped crews improvise.

So far, the series has gathered some excellent reviews from the likes of Steve Berry, NYT-bestselling author of The Kaiser’s Web, who said, “Another clever mixture of fact and fiction…Bernard’s flair for bringing history alive is on full display.”

His debut, Eyewall, became a number one bestseller in Amazon’s Kindle Store.

Of his next four novels—Plague, Supercell, Blizzard, and Cascadia—three won EPIC eBook Awards in the suspense/thriller category. Blizzard led to his nomination for Georgia Author of the Year in 2016.

Buzz switched gears from thrillers to historical fiction for his sixth novel, When Heroes Flew. It was released to rave reviews in April 2020.

His seventh novel, WHEN HEROES FLEW: THE SHANGRI-LA RAIDERS, will be released in July 2021.

Before becoming a novelist, Buzz worked at The Weather Channel as a senior meteorologist and served as a weather officer in the US Air Force where he attained the rank of colonel.

Buzz is a past president of the Southeastern Writers Association as well as a member of Military Writers Society of America, International Thriller Writers, Atlanta Writers Club, and Willamette Writers.

He lives in Roswell, Georgia. To learn more, please visit his website.