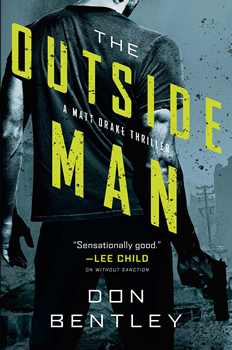 It would be easy to assume that Don Bentley’s passion for writing began after the adrenaline-fueled jobs that consumed a good chunk of his adult life. But the former Army pilot, SWAT member, and FBI agent says his non-writing background is really “just a symptom of my inability to decide what I wanted to be when I grew up.”

Bentley was actually a writer first, beginning his first novel in high school, and then continuing to hone his skills throughout college and the first couple of years in the Army. But when he finished that book, he couldn’t sell it.

He wasn’t able to sell his second book either.

Bentley wasn’t prepared to give up, but he couldn’t sit idle either. So at the same time he was running around saving the world, he also enrolled in the Seton Hill MFA in Writing Popular Fiction program, where he wrote his third book.

Third time wasn’t quite the charm—he didn’t sell that novel either—but it did garner the attention of agent Barbara Poelle. She told him to go home and write a better book.

Poelle agreed to represent him and that book—last year’s pulse-pounding debut, Without Sanction—sold in seven days.

“So if you discount the 17 years and three books that didn’t sell, I’m pretty much an overnight success,” he jokes.

Regardless of how long it took, Bentley’s debut caught the espionage genre by surprise, with Kirkus Reviews calling it a “page-turner with the kind of small details that lend unquestionable authenticity.”

Without Sanction introduced us to Matt Drake, a Defense Intelligence Agency operative who barely escaped Syria with his life after a clandestine operation that went horribly wrong. Wracked with survivor’s guilt, Drake is dragged back into the world of espionage—and Syria—on a suicide mission to save the world from a weapon of mass destruction. It’s the kind of thriller that leaves an impression—both of the author and the character.

No surprise, then, that Drake is back in Bentley’s incredible follow-up, THE OUTSIDE MAN, where a familiar foe known as The Devil is coming for him—right up to his front door.

In this exclusive interview with The Big Thrill, Bentley talks about the second installment in his series, how his former careers inform his work, and what it takes to craft an antagonist as terrifying as The Devil.

Writing novels is clearly where you belong—but you took a few sideroads on your path to publication. How have these other careers informed your writing?

Quite a bit. As an FBI Agent, my job was to run and recruit what we called sources and what the intelligence community calls assets. As luck would have it, my protagonist, Matt Drake, has the same job! Actually, he works for DIA, or the Defense Intelligence Agency, and he is much cooler than I am. I certainly draw on my experiences in the FBI and my time as an Army officer, but much of the fun stuff that happens in my books comes from folks I know who have worked in the intelligence or special operations communities. I once had an interviewer ask me if I was Matt Drake. I assured her that I was definitely not, but that I’d had the privilege of standing in the room with him. The people I’ve been lucky enough to meet in my checkered career are inspiration for Matt and his merry band of misfits.

When we first meet Drake in Without Sanction, he’s a broken man. How has he evolved at the start of THE OUTSIDE MAN?

As an Army Apache pilot in Afghanistan, I was part of an operation that went horribly wrong, and I drew on this experience while writing Without Sanction. Across the book’s arc, Matt gets a chance at redemption, and this puts him in a different space emotionally and mentally at the beginning of THE OUTSIDE MAN. That said, all is not right in his world. Like most veterans, I went through a transition period when I left the Army, and Matt is undergoing a similar process at the beginning of THE OUTSIDE MAN. The Real Book Spy recently reviewed THE OUTSIDE MAN and remarked on the emotional aspects of the story, for which I was very grateful. I love this genre and the fantastic action scenes it breeds, but I think it’s the deeper aspects of character that capture a reader’s attention and bring them back book after book.

Speaking of great characters, one of the things that makes this book a stand-out for me was the villain known as The Devil. He’s about as evil as they get, but there are nuances there that allow for a sliver of sympathy. What was the inspiration for this character?

Thank you so much for saying that! One of the things that I’ve learned through reading fantastic writers like Brad Taylor or Mark Greaney is that a great protagonist must be equally balanced by a fearsome villain. Like most writers in this genre, I spent a lot of time studying ISIS as the entity transformed from a terrorist organization into a quasi-nation state. As ISIS went through this metamorphosis, it became apparent that many members of the leadership team were men who had been generals in the Iraqi armed forces under Saddam Hussein. This made me start to wonder what else those disgraced leaders might have been up to, and just like that, The Devil was born.

The Big Thrill is as much for aspiring writers as it is for readers, and this series has aptly been described as “high action.” I think THE OUTSIDE MAN is actually more action-packed than Without Sanction, if that’s possible. What are some tips you would offer writers for choreographing tight scenes that make you turn the page?

A writer friend of mine once told me that the protagonists must fail forward, and I try to keep this in mind while crafting every scene. I begin by brainstorming ways I can make things more difficult for Matt. As writers, we often want to take the easiest, most linear way through a scene. And this makes sense because, at heart, we writers are lazy creatures who want to put as few words on the page as possible! But as a reader, you want to see your hero struggle through the story, attempting the impossible, failing, and trying again. This can take the form of micro-conflicts like your character not finding his car keys in the first place he looks, or the traditional macro-conflicts found in great fight scenes. Either way, your character should move from conflict to conflict, taking one step forward and often two steps back. Admittedly this is hard to accomplish as a writer, but if done right, it’s incredibly rewarding to the reader.

What is the most rewarding part of the writing process for you? The most difficult?

My wife is my first reader, and the most enjoyable part of writing is watching her making her way through a completed draft. And yes, I really mean watching. If she lets me, I’ll often sit with her as she reads because I love hearing her laugh at the funny parts or catch her breath when it looks like Matt is truly done for. On a side note, I find this process much more enjoyable than she does. Especially when she doesn’t laugh at a part I think is hysterical, prompting me to spend the next ten minutes trying to explain the joke. Pro tip—if you have to explain a joke, it’s probably not that funny. But I digress. First drafts are always the most difficult part for me. I write organically, which means that I figure out the story as I go, and navigating an unfolding plot is always terrifying!

It’s been a difficult time for publishing these past few months, in particular when it comes to promotion and marketing. How have you navigated these challenges, and do you have any upcoming virtual events you would like to talk about?

2020 was a crazy year to debut, no two ways about it! I was fortunate in that I got to do most of my book tour events before the lockdowns started, but I still missed out on a lot of fun. My publisher, Berkley, has really stepped up in the ensuing time with a ton of creative digital marketing and virtual events, but for me, nothing beats connecting with readers face to face. On that note, I’ll be doing virtual events March 2-5th for THE OUTSIDE MAN’s launch with Brad Taylor, Mark Greaney, Jack Carr, and Nick Petrie. For more information, you can visit my Facebook author page which is bentleydonb. I also have the virtual tour card pinned to my Twitter profile which is @bentleydonb. 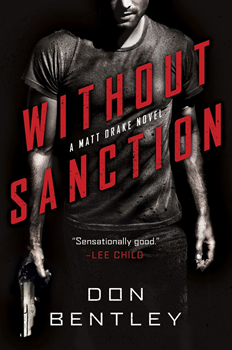 You also write in the Tom Clancy universe—with your first installment coming out in June. How difficult is it to navigate the world of characters you did not create?

I’m actually going through my final round of edits for Target Acquired right now! Coming to the Clancy universe was incredibly intimidating for a number of reasons, chief of those being that I’m a huge Clancy fan. My friend lent me his copy of Red Storm Rising when I was 14, and I’ve been addicted to military thrillers ever since. As an adult, I’ve gotten to know many previous and current Clancy writers like Mike Maden, Mark Greaney, and Marc Cameron. These folks are stellar wordsmiths, and working in the universe they helped to create really did feel like standing on the shoulders of giants. My editor, Tom Colgan, has been fantastic throughout this process, and early on he told me that he wasn’t expecting me to be Tom Clancy. Instead, he wanted me to bring my style of writing to the Clancy Universe, and I used this as my lodestone while writing Target Acquired. As I worked on the novel, I re-read many of the older Clancy novels and made a list of the things that I loved about his books, but I didn’t try to duplicate his style. Instead, I followed Tom Colgan’s advice and wrote my spin on a Clancy novel. Target Acquired was both the hardest and most rewarding book I’ve ever written. Hopefully the readers will feel the same!

In addition, you are working on new books in the Matt Drake series, I presume. What can you share about your upcoming projects?

Yes! Last year, Tom Colgan bought books 3 and 4 in the Matt Drake series, and now that I’ve turned in Target Acquired, I’m frantically working on Drake #3. As I said earlier, I write organically, so I couldn’t tell you what’s going to happen in the novel if you put a gun to my head, but I can promise you it will be a ton of fun.