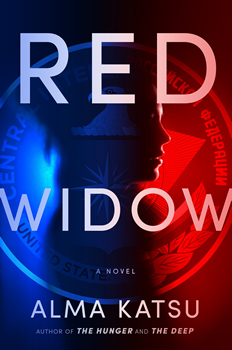 In RED WIDOW, a young CIA officer is asked to track down the mole inside Russia Division who is giving up important assets—Russians that the CIA has recruited to spy for them—to Moscow. Once a rising star, her job now hangs by a thread, and this is an opportunity to redeem herself. But once she starts pulling the threads, she finds a web of intrigue that leads to a tragic incident in the Division’s recent past—and secrets she wasn’t meant to uncover.

Alma Katsu’s new book explores themes of trust, loyalty, and betrayal. In her words, “It’s about the imbalance of power between the very powerful agencies that conduct our nation’s intelligence and the people who work there. Because it’s the business of keeping secrets, there’s the potential for abuse. Working at the CIA, you can’t know all of its secrets. That’s a given. You have to trust that the Agency will act in your best interest. When you find out that you’ve been sacrificed—your life, your future—your trust is shattered.”

The story centers on Lyndsey Duncan, a gifted young woman with a reputation of being a human lie detector. She was a rising star in the CIA—until she’s not. Now she’s under review for an indiscretion during her last post and unceremoniously shipped back home with her tail between her legs. Except, her former boss and mentor enlists her help with a puzzling new case.

“She comes to Russia Division and finds people keep her at a distance,” Katsu says. “She’s no longer a big deal, she’s blemished. She develops a friendship with Theresa Warner, also once one of the stars in Russia Division, and sets out to find the mole.”

Theresa Warner is the infamous “red widow,” a CIA officer whose husband is killed during a botched operation. She could have left the business and concentrated on their only child, but she doesn’t.

“She returns to work because it’s part of her identity,” Katsu says, “it’s where she met her future husband, it’s almost all she knows—but it’s not the same. She’s been touched by tragedy and once that happens, people don’t look at you or treat you the same. Eventually she learns a shocking secret that’s been kept from her, and it blows up her world. She becomes consumed with rage and bent on revenge.”

Most writers find writing evil characters a fun challenge. On the one hand they must be believable, but on the other they must be slightly bigger than life. In RED WIDOW, we encounter such a character in the form of Dmitri Ivanovich Tarasenko.

“Dmitri is an officer with Russian intelligence,” Katsu says. “He was an opportunity to show what it’s like when an intelligence officer has no scruples and is all about self-interest. I didn’t set out to demonize the GRU and FSB. All agencies have good and bad actors. Dmitri Tarasenko embodies a lot of the dynamics you find in Russia today: acceptance of endemic corruption, unrestrained violent interference in neighboring countries (he’s a war criminal who’s never been punished), an insider in a secret, seemingly lawless culture.”

Now to address the elephant in the room. Katsu’s previous novels were in quite a different genre than spy fiction. Ironic, perhaps, in that her day job is with the CIA.

“I’d always wanted to write a spy novel for obvious reasons, but after you’ve been writing in a particular genre, it’s not easy to diversify,” she says. “It’s challenging: your readers know you for a particular kind of book; will they follow you if you do something different? But my editor at Putnam, Sally Kim, was very supportive. She worked with me to develop the plot of RED WIDOW and to make it something different, hopefully the kind of spy thriller you haven’t seen before. It’s much more twisty than I would’ve dared try on my own!”

Having worked in intelligence is, of course, a blessing when it comes to writing spy books. It’s really second nature for her.

“Where it’s not so helpful is that you can’t help but be conscious of what your former coworkers might think,” Katsu says. “It’s impossible to write a spy thriller that’s compelling to modern readers and completely true to life. Sometimes people in the business can be a bit critical of unrealistic spy thrillers, but doubly so if the author used to be one of them. You have to put it out of your mind.”

If the recent Netflix series Spycraft is any indication, the craft continues to be a topic of interest.

“I haven’t seen the entire series yet,” Katsu says, “but I like what I’ve seen so far.  Technology is a big part of the intelligence business—Ian Fleming got this absolutely right in creating Q, but where Q’s work is fantastical, the women and men in our technical shops have to work their miracles within the constraints of reality. I spent the last decade of my career in research and development, so it’s fun to watch the program and see what they’ve decided to share.”

And while the only thing that never changes is change itself, the basics have stayed the same. The role of intelligence is to find the information that policymakers and military personnel need to make decisions—specifically, information with foreign intelligence value, not domestic.

“How the job is done has changed thanks to technology,” Katsu says. “For instance, we’re currently in a surveillance age, where the public largely volunteers to be monitored, whether it’s through data we create by engaging on social media or traffic cameras or facial recognition systems. There’s a lot more data available on each of us, which makes it easier to find out things about our targets. But it also makes it harder for agents to move around without being detected. The other thing that’s changed is that the role of intelligence is more prominent in a wider range of operations—that’s an awkward way of saying you see intelligence having a more prominent role in joint operations. This is primarily due to 9/11. The classic op is no longer, necessarily, a surgical endeavor that takes place wholly in the shadows. There’s more embedding with the military and law enforcement.”

RED WIDOW has already been optioned for TV by Fox, with Sarah Condon (USA’s Dare Me) serving as executive producer.

“It’s great to have someone at the helm who knows how to keep that aspect at the fore, with a clear idea of how to pull together the right team,” Katsu says.

She hopes that RED WIDOW is more an expansion of her career rather than a change, and she confirms that she will continue to write horror, fantasy, and historical fiction.