Education Through the Magic of Storytelling 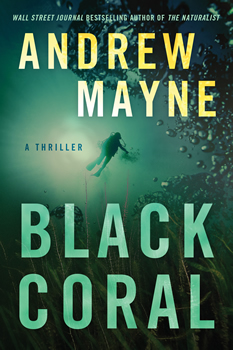 Andrew Mayne has more than a few tricks up his sleeve—he’s an accomplished magician, deep sea diver, and consultant, not to mention skilled in computer coding, developing educational tools, and of course, writing award-nominated bestselling fiction. They are impressive skills on their own, but when they combine? Abracadabra! It’s magic.

Such is the case in Mayne’s latest series featuring Sloan McPherson, a Florida police diver with the Underwater Investigation Unit. BLACK CORAL is the second installment, following series debut, The Girl Beneath the Sea, and in it, Sloan investigates an abandoned van at the bottom of a murky Florida pond. She gets more than she bargains for, though, when she discovers the bodies of four teens believed to have gone missing 30 years ago on their way to a rock concert.

Tragic accident or murder? Sloan’s gut says it’s the latter—but the deeper her investigation goes, she’s churning up more than catfish and water lettuce. The evidence tracks to a serial killer who may have been dormant—but is now reinspired to continue his spree.

To catch him, Sloan knows she has no other choice but to put herself in this monster’s sights.

In this interview with The Big Thrill, Mayne reveals a few of his writing tricks and talks about some of the ways he’s using magic, technology, and storytelling to create groundbreaking educational tools.

Clearly this series was inspired by your vast personal experience as a diver—what is the most terrifying (or fascinating) thing you have seen during one of your underwater adventures?

I got to do my own Discovery Channel Shark Week special to test out a suit to make divers more stealthy underwater. As part of testing I swam with great white sharks in a hunting ground off the coast of Australia. As a baseline I had to see what happened with no special suit. At one point I was surrounded by over a dozen great white sharks with nothing between us—no cage, nothing. They’d come up close to me and I’d bump them away with a shield, and they’d just glide away like it was no big deal. It was the most serene experience of my life. They were inquisitive, but not overtly threatening. I still can’t find the words to describe it.

Your work with sharks is awe-inspiring—and admittedly, terrifying. With the great educational tools you’ve helped develop, what is one myth about sharks you’d love to help debunk?

If you’ve ever spent time in the ocean you’ve been around sharks. If you’ve been where there are lots of fish, you’ve probably been near large sharks, but just didn’t know it. They really try to avoid people because we’re not their ideal food and are annoying. That said, sharks have moods, can be territorial, and get confused.

What can you share about the inspiration for BLACK CORAL’S fast-paced plot?

Part of the inspiration was an actual cold case in South Florida where a group of teenagers were thought to have run away from home. Years later the real truth was found out, and it was profoundly sad.

Speaking of fast paced, The Big Thrill is as much for writers of thrillers as it is for readers. I know magicians don’t normally give away their tricks, but what tips would you offer for aspiring authors about how to keep those pages turning?

If you’re bored while writing a scene, your audience will probably be bored reading it. Avoid anything that feels like “filler” or “background.” Make details vital to your story and only tell what’s necessary in service of the characters.

BLACK CORAL kicks off with a pulse-pounding beginning—I might add alligators to my list of animals that frighten me. Have you ever come into close contact with one during your underwater explorations?

I grew up on a canal in South Florida. We had a large alligator that lived down the canal in a large bend. We’d go kneeboarding through there and he’d just keep his distance. I felt sorry for him with all of teenagers driving our boats back and forth and splashing up the canal. Nobody messed with him. He avoided us.

Sloan is one of the most fleshed-out characters I’ve read in a long time—she’s deliciously complicated and layered. Smart, capable, brave—and relentless in her pursuit of the bad guy. She’s also not afraid to go outside the law a bit to get the job done. What can you share about the inspiration for her character?

I like characters that are interesting to begin with—then you send them on a journey where they’re going to have to adapt and evolve. In the first Sloan McPherson book (The Girl Beneath the Sea) we meet her before she’s fully embraced the idea of being a police officer. In BLACK CORAL she’s accepted this but is learning how to be a detective and to think before acting. In each book we watch as she becomes more capable but faces more complex challenges—not the least how to do all this while still being a parent.

Speaking of characters—Florida is almost a character itself. How important is setting to you? Why did you choose to set the series in Florida?

I grew up in Florida. You don’t know how special it is until you live somewhere else and realize that having alligators in your backyard isn’t normal.

I loved learning about how you’ve used magic to help teach science to children. How has magic helped you as a novelist?

Magic at its best is good storytelling. There’s a conflict and a resolution. Like a good book, the end result should be a surprise but make sense all along.

Tell us a little about AI Channels.

In 2020 I started working with OpenAI, the artificial intelligence research organization that had backing from Elon Musk and Microsoft. They built a really sophisticated AI called GPT-3 that can carry on conversations and do a million other things. In exploring the potential for GPT-3 I built an app called AI Channels that allows you to have conversations with different AI personalities and simulations of people like Albert Einstein, Mary Shelley, and Edgar Allen Poe. The project was kind of a proof of concept for different ways to work with massive language model and a number of the methods I created are now part of the official documentation for using GPT-3.

It was a fun experience because understanding language and theory of mind really helped in working with GPT-3. I was able to use the part of my brain that loves to write and the part that loves to code and think logically.

Education seems extremely important to you—what do you hope readers “learn” from your books?

The most interesting people are the one who are always learning things. My characters have skills and are constantly acquiring new ones. That’s also my model for life. I had to learn how to use a rebreather to pull off my shark experiment. I needed to learn to code before I could do interesting things with AI. All of which are things I learned quite recently.

Will there be a third Underwater Investigation Unit book? If so, what can you share about the plot—and more importantly, when we might be able to get our hands on it?

Yes. I’m in the middle of writing now. I don’t want to reveal too much, but this one will send Sloan back to the ocean to try to solve a case.

Any other cool projects/books in the works that you’d like to tell us about?

If you like Sloan, you’ll probably like my Theo Cray and Jessica Blackwood books. Theo is a computational biologist who hunts serial killers. Jessica is an FBI agent who grew up in a family of magicians. Each of them started off in their own series, but now they’re teaming up in a crossover novel called Mastermind due out at the end of this year. You might want to follow those two because down the line you never know who else might show up…